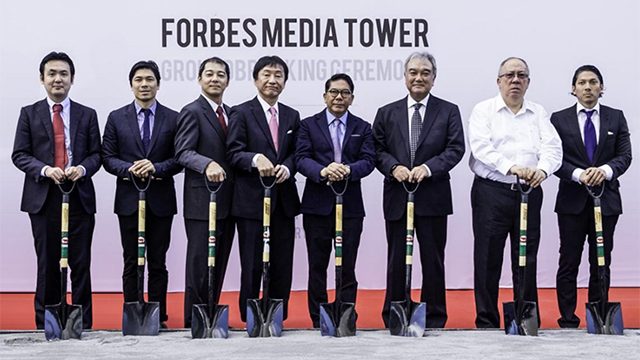 Facebook Twitter Copy URL
Copied
With a total gross floor area of 95,000 square meters, the Forbes Media Tower is expected to be completed in 2019

Century Properties, through its subsidiary Century City Development Corporation, and Mitsubishi, one of Japan’s oldest conglomerates, earmarked a total of $100 million (P4.786 billion) for the tower.

According to Century Properties, the tower is designed to serve the world’s business leaders by providing an environment with premium spaces to conduct business.

“               The groundbreaking event follows the announcement of the two firms to develop, lease out, and maintain the world’s first Forbes-branded commercial building through a joint venture agreement,” Century Properties said in a disclosure to the local bourse on Wednesday, February 3.

Held at the construction site of Forbes Media Tower along Kalayaan Avenue, the ceremony was attended by Century Properties and Mitsubishi Corporation executives.

The Forbes Media Tower project will be undertaken by Century City Development II Corporation (CCDCII), of which CCDC and Mitsubishi have 60% and 40% ownership, respectively.

Century Properties and Mitsubishi will finance the project through a $51-million equity and a 10-year, $49-million senior loan from the Bank of the Philippine Islands (BPI).

In November 2015, the two companies signed the loan facility with BPI as lender.

“The Forbes Media Tower aims to become an address of choice for both multinational as well as leading BPO corporations looking to participate in the booming BPO sector,” Century Properties COO Marco Antonio said.

For Mitsubishi’s Takuya Kuga, “Mitsubishi Corporation entered the ASEAN (Association of Southeast Asian Nations) real estate market in 2013 with belief in the long term and sustainable growth in ASEAN countries, especially in the Philippines.”

After a year of negotiations with Century Properties, Mitsubishi considers the groundbreaking a significant milestone for the project, “owing not only to good luck, but also to natural good chemistry between Century and Mitsubishi,” Kuga said.

The Forbes Media Tower will have a total gross floor area of approximately 95,000 square meters. It is expected to be completed in 2019, according to the disclosure.

Century Properties has expanded its investment portfolio of commercial developments in recent years with the introduction of Century City Mall, the acquisition of Pacific Star Building, and the launch of Centuria Medical Makati, the Philippines’ largest outpatient medical facility.

The real estate company also plans to have projects in leisure and tourism, as well as economic housing.

Century Properties’ other commercial developments include the Asian Century Center in Bonifacio Global City and Novotel Suites Manila, a hotel at the Acqua Private Residences in Mandaluyong City.

In 2019, these projects are projected to yield a total gross floor area of about 295,000 square meters. – Rappler.com