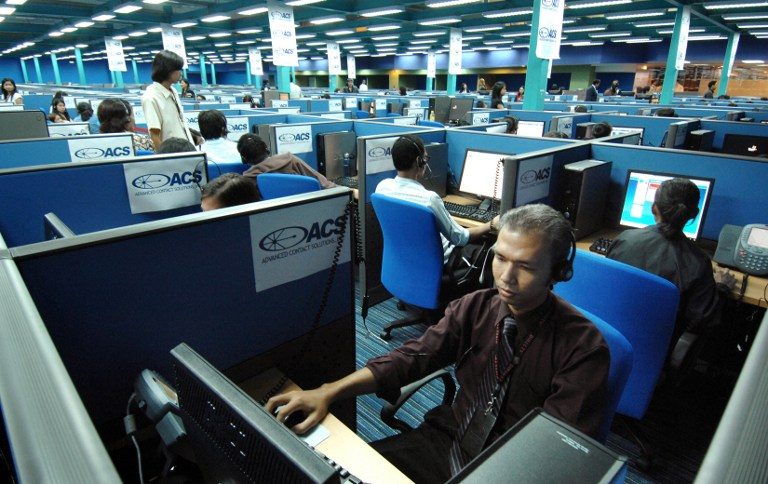 Facebook Twitter Copy URL
Copied
The continued growth of the BPO industry, which exceeded its targets last year, is expected to make up for the projected contraction in OFW remittances in 2016

MANILA, Philippines – Any slump in the remittances of overseas Filipinos due to the tension in the Middle East, among others, can be offset by the growth in business process outsourcing (BPO) revenues, according to economists from the Bank of the Philippine Islands (BPI) and Dutch financial giant ING Bank.

“True, troubles in the MENA region may result in late salaries and possible layoffs for migrant labor, but Filipinos have always found a way to send home remittances for their loved ones, come hell or high recession, so never count them out,” he said.

Mapa cited the situation in 2008, when OFW remittances still grew despite projections of a decline due to the global financial crisis.

“With all the uncertainty in global markets, we find ourselves right back where we were in 2008.  But 8 years under our belts, the Philippines has grown, albeit still skewed to certain sectors but grown nonetheless,” he added.

Mapa also said the slowdown in the US dollar value of remittances in the past few months translates into a healthy peso growth, supporting private consumption.

The BPI economist added that the country’s BPO industry is ripe for growth and would help offset any slowdown in cash remittances from overseas Filipinos.

For his part, ING Bank Manila senior economist Joey Cuyegkeng sees cash remittances contracting by 5% this year but would be eased by the projected mid-teens growth in BPO revenues.

Last year, the  Information Technology-Business Process Association of the Philippines said that the BPO industry’s contribution to the Philippine economy is likely to overtake OFW remittances in two years, or by 2017.

The BPO industry exceeded its targets in 2015, generating $22 billion in revenues and 1.1 million direct employment. (READ: Philippines’ back office shines in 2015, exceeds targets)

Bangko Sentral ng Pilipinas data showed that OFW remittances reached $25 billion in 2014. The BSP has lowered the projected growth in OFW remittances to 4% from 5% in 2015 and 2016, due to the continued weakness of other currencies against the US dollar.

Based on latest data from the central bank, cash remittances went up by 3.6% to $22.83 billion from January to November last year, compared to $22.08 billion in the same period in 2014.

About 79% of the cash remittances came from the US, Saudi Arabia, United Arab Emirates, Singapore, United Kingdom, Japan, Canada, and Hong Kong.

Remittances from the Middle East accounted for 22% of the total in 2014 and in 2015. Money sent home by Filipinos from Saudi Arabia and the United Arab Emirates account for almost 17.5% of total remittances.

News from these economies on the repercussions of 12-year low oil prices and challenging fiscal positions raise the likelihood of weakening OFW remittances.

The stronger US dollar has also affected remittances from other host economies such as the European Union, Japan and other Asian economies. – Rappler.com