MRT Holdings’ Sobrepeña: Roxas, Abaya may be liable for graft 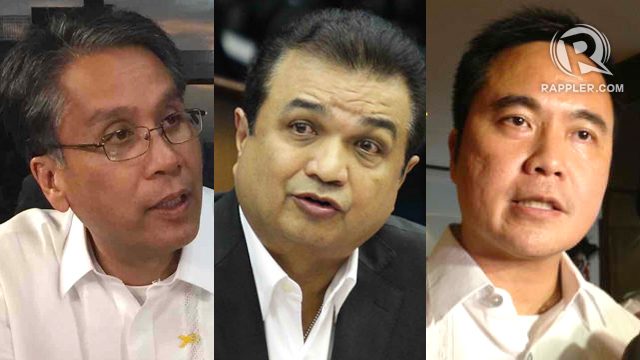 In a statement on Monday, February 8, MRT Holdings II Chairman Robert John Sobrepeña said that Roxas’ and Abaya’s inaction on private companies’ proposals to maintain Metro Manila’s busiest train system, supposedly since 2000, could be basis for the Ombudsman to file graft charges.

“Their inaction is actually against the law. The law says that government should reply within a stipulated number of days to any proposal given to it, especially proposals given by the owner of the system itself. So their inaction is already one ground for possible graft,” Sobrepeña said.

The MRT Holdings chief said his company submitted proposals in 2000, 2004, and 2008 to maintain, repair, and upgrade the MRT3, but the Department of Transportation and Communications (DOTC) did not respond.

“Everything is on record. We, the private sector corporations, have done everything that we possibly can. In fact we have 8 proposals with the DOTC. So I beg to disagree when DOTC says the private sector has done nothing. That is a lie. We did everything we could do by submitting these proposals. They refuse to let us in the system, they refuse to answer our proposals, and then they have that temerity to say that we did nothing?” Sobrepeña said.

“In reality it is the DOTC and Secretary Abaya who did nothing because they refuse to act on our proposals which remain pending up to now,” he added.

Proposals pending with the DOTC include one submitted in 2011 from Metro Pacific Investments Corporation (MPIC) for capacity expansion or additional trains and upgrade; another proposal in 2014 from Metro Global Holdings Corporation for the fast-track repair of the MRT3; and a proposal in 2015 from MRT Holdings for capacity expansion and upgrading of the system.

“All these proposals offered expansion, repairs, and upgrade at no cost to government, yet were ignored by the DOTC,” Sobrepeña said.

Although the department has not given its official word yet, Abaya told reporters in March 2015 that his office was keen on rejecting the proposals as “most of their proposals are already in our pipeline… in our MRT3 rehab projects which [are] already ongoing.”

Sobrepeña cited the awarding of the MRT3 maintenance contract to “incapable, unqualified providers” as a second basis for graft charges.

“The fact that they awarded such a huge contract and important contract to a company only two months old, with a capitalization of only P600,000… I think from there you can already see a smoking gun,” Sobrepeña said.

But Abaya had earlier clarified that his office “did due diligence before awarding the contract” to a Korean-Filipino joint venture led by Busan Transport Corporation.

Busan has been operating and maintaining the Busan Metro, 4 railway lines of the mass transit system in Busan, South Korea since 1999, gaining recognition as one of the most reliable train experts worldwide. Asked if Roxas should also be made liable along with Abaya, Sobrepeña said that “this is something that the courts should look into.”

Sobrepeña said the series of events that led to the damage of the MRT3 started when Roxas was at the helm of the DOTC.

“It was under [Roxas’] term that the Sumitomo contract was not renewed. That was the first mistake. The second mistake was negotiating with PH Trams, which also happened during the term of Roxas,” he explained.

“The third mistake was committed by Secretary Abaya when two days into assuming office, he signed a contract prepared during the time of Roxas. As a Cabinet secretary, you should read what you signed because that gave finality to (the PH Trams contract). The rest is tragic history,” Sobrepeña added.

Earlier, Senator Grace Poe also recommended the filing of charges against Abaya and other transportation officials for alleged “negligence and inaction” that resulted in the sorry state of the MRT3.

Abaya on Thursday, February 4, had shrugged off Poe’s Senate report.

(We are not worried. We are not concerned about the report of Senator Poe because we have a clear conscience.) – Rappler.com