MANILA, Philippines – Philippine authorities were not able to trace the exact location of the $81-million stolen money from Bangladesh Bank‘s account, citing the country’s “strict bank secrecy and weak anti-money laundering act (AMLA)” as hindrances to reach a meaningful probe.

Anti-Money Laundering Council (AMLC) Executive Director Julia Bacay-Abad also expressed her frustrations during the hearing, conceding that “the money trail ended at casinos. It’s a dead end. Non-inclusion of casino in AMLA just increased the probability of money laundering in the Philippines.”

The law, which was first introduced in 2001, left casinos off the list of entities required to report suspicious transactions to the AMLC. (READ: How Bangladesh Bank dirty money easily got into PH)

“What is important here is that casinos should be covered by AMLC. You see, we are having a difficult time with the investigation now. Other nations are now saying: Philippines, you are too risky to deal with. You have very weak AMLA laws,” Senator Teofisto Guingona III told reporters after the hearing.

Senator Sergio Osmeña III, author of AMLA, said: “It’s like we are far from seeing the light at the end of the tunnel…It is high time to revisit AMLA and bank secrecy laws.”

“Now we are faced with the questions: Is the inclusion of casino operators necessary in our AML/CFT (Anti-Money Laundering and Combating the Financing of Terrorism) regime? The thing speaks for itself,” Dooc said during the hearing,

“The lesson we learned from this recent episode is unmistakable: We have to put more teeth in our laws to stop criminal elements from exploiting the deficiencies in our system,” Dooc added.

During the Senate probe, Guingona revealed that RCBC allowed the withdrawal of some $81 million funds suspected to have been stolen from Bangladesh Bank’s accounts even if it received a stop payment order from the Federal Reserve Bank of New York on February 8, a banking holiday in the Phiippines.

It was on February 5 when RCBC received the suspicious funds, Guingona said. (READ: RCBC manager invokes right vs self-incrimination at Senate probe)

“On the morning of February 9, the first banking day, you should have seen the stop payment request. But apparently it was not honored because the funds were withdrawn,” Guingona told Tan before the hearing.

Citing documents filed by AMLC with the courts, Guingona said, “RCBC responded to the Bangladesh Bank’s stop payment request at 7:45 pm of February 9. That was the end of the day already.”

The senator moved forward by asking Tan: “Would you care to explain why the stop payment request – which should have been honored at the very start of the banking day – was not honored?” 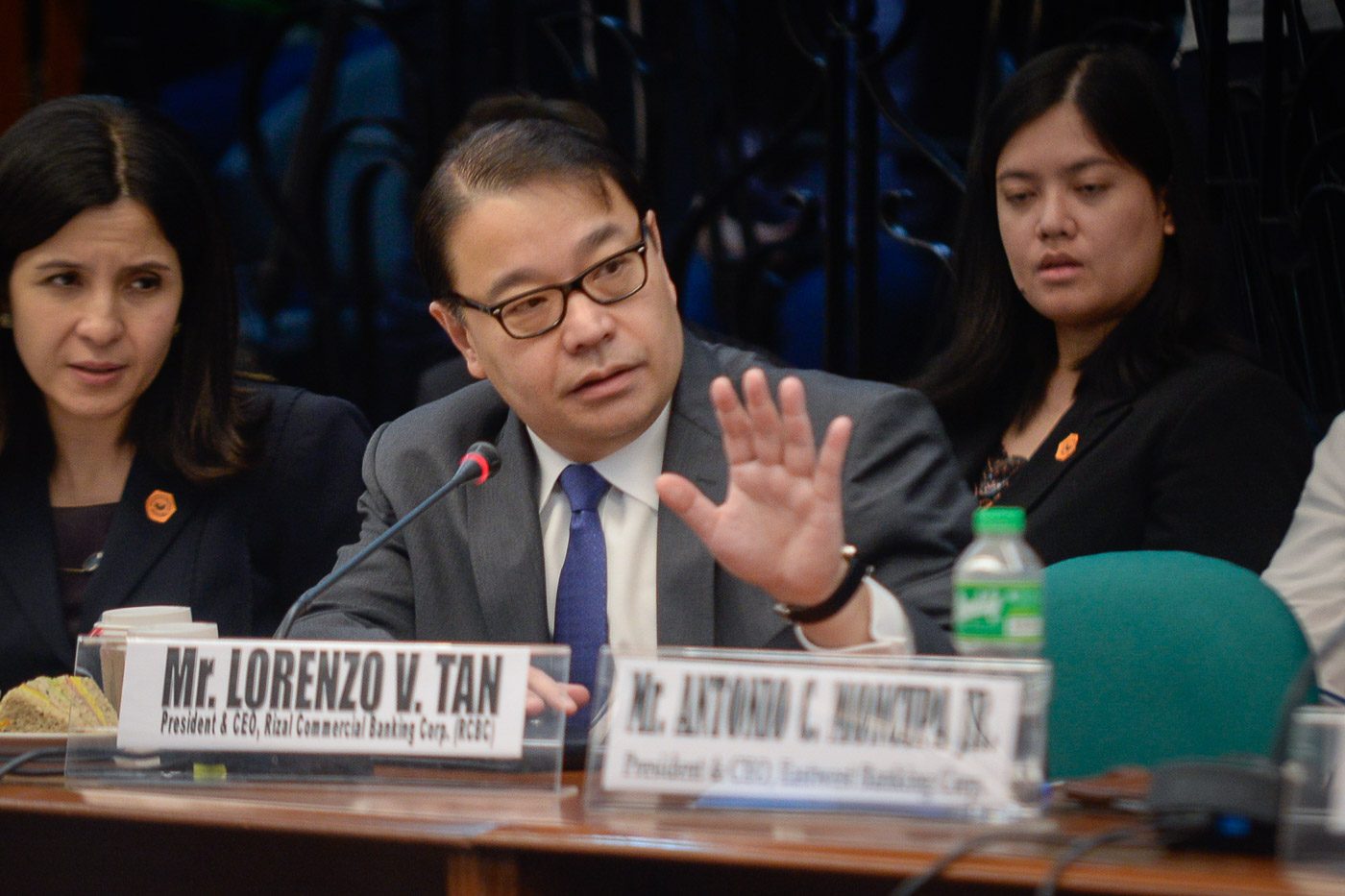 But Tan invoked his right to bank secrecy and declined to reveal details of the transactions made.

“Sorry, your honor. I cannot confirm or deny this request specific to this transaction,” Tan told Guingona.

“Again, your honor, I’m precluded because of bank secrecy. But as a general rule, these orders are sent by the head office to the branch manager,” Tan replied. (READ: Ex-S&R owner to sue RCBC manager over heist)

The chair of the Senate Blue Ribbon committee then asked Deguito how such huge funds easily coursed through the bank despite indications from the Federal Bank that the transactions were illegal.

“February 9 was a banking day. That was a Tuesday. $81 million was still there in the accounts,” said Guingona.

“On February 9, all the $81 millon was withdrawn. Did you not have a stop payment request on February 9?” he asked Deguito.

But just like Tan, Deguito also invoked the Bank Secrecy Law and her right against self-incrimination, as AMLC has filed a case against her. (READ: RCBC manager, others face anti-money laundering complaint)

“But I’m willing to answer questions only in a closed-door executive session,” she said. Bacay-Abad said the stolen funds were moved to 4 RCBC bank accounts that were opened in May 2015 and had remained idle until the transfers were made on February 5, 2016.

After the transfer to the 4 bank accounts, Bacay-Abad said the funds were immediately withdrawn and deposited under the account of Filipino-Chinese businessman William S. Go, who was also at the Senate and denied any involvement. He claimed he never opened a bank account in RCBC Jupiter, Makati City branch.

The funds were converted into pesos and delivered in cash tranches to a WeiKang Xu by remittance firm Philrem Service Corporation, the remittance firm’s president Salud Bautista told the Senate.

A representative of Solaire Resort and Casino confirmed this and said Xu is a registered junket casino operator.

When asked where the stolen money is now, Bacay-Abad said “the last information we have is that it ended in casinos, which are out of our jurisdiction.”

For Espenilla, this latest money laundering case “is not helping” the Philippines address its problematic reputation abroad.

“The issue here is that those banks operating under their own anti-money laundering laws… What happens is they make this decision to close down accounts of Philippine remittance companies,” Espenilla said.

“Under their laws, banks have the right to determine the risk coming with their partnership with certain businesses.”

Bangladesh Ambassador to the Philippines John Gomes said on the sidelines of the hearing that his country “still hopes to recover the funds.”

With just a little information bared, Guingona set the next Senate hearing on Thursday, March 17. – Rappler.com