PLDT, Globe shares down as PCC keeps an eye on SMC telco deal 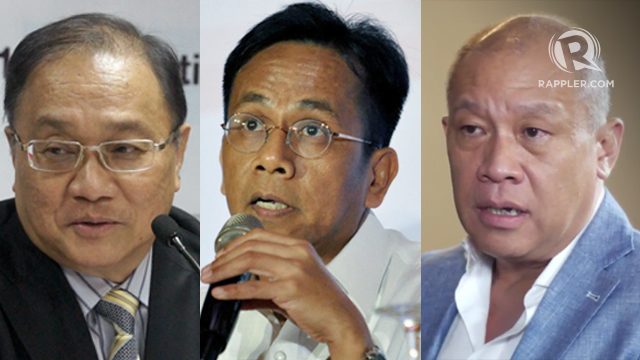 COL Financial Group vice president April Lynn Lee-Tan said the PCC’s decision to reject the companies’ initial report “seems to be the most likely reason” behind the dip in PLDT’s and Globe’s shares. (READ: San Miguel’s sale of telco business: Will consumers benefit?)

“I think the deal was a positive for all 3 companies, so any signs of [a] failed deal may trigger selloff in both telecom shares,” Alexander Adrian Tiu, senior equity analyst at AB Capital Securities, said in a text message.

Last Friday, June 10, PCC Chairman Arsenio Balisacan told Rappler that until the commission approves the telcos’ transaction report, PLDT and Globe cannot proceed with the terms of the deal.

Balisacan – who served as the former National Economic and Development Authority director general – said the initial transaction report of PLDT and Globe on the buyout of SMC’s telco assets had “incomplete information.”

The PCC head then clarified that the “deal is not deemed approved.” (READ: PCC rejects PLDT, Globe report on San Miguel telco buyout)

But for the country’s telco duopoly, the PCC has no right to undo the deal based on its claim that their report lacks information.

Globe said it will provide more documents to the PCC, but clarified that this is “solely for its reference, information, or research purposes.”

Citing the PCC’s Memorandum Circular 16-002, Globe and PLDT said the filing of a notice before the release of implementing rules and regulations (IRR) makes a transaction “deemed approved” and “may no longer be challenged” by the PCC.

This, however, was clarified by the PCC also last Friday. The commission said that the mere filing of a notification with the PCC – even under transitory rules – does not guarantee that a transaction is “deemed approved.”

Globe, however, stood its ground, saying the deal has been “deemed approved by the PCC and as such, may no longer be challenged.”

This was echoed by PLDT, telling the local bourse that the deal “enjoys the benefit” of the memorandum and that the transaction is “deemed approved and cannot be subjected to retroactive review by the commission.”

PLDT also told the bourse that it submitted a response to the PCC on Friday, saying that its notice is “adequate, complete, sufficient, and compliant with the requirements under the [memorandum]; and does not contain any false information.”

In a statement late Monday, the PCC warned PLDT and Globe of possible violations should they fail to comply with the commission’s rules.

“The PCC denied their initial filing which was found to be defective and deficient. It is now up to the parties whether or not to comply,” the PCC said.

The PCC reminded them of Section 17 of the Philippine Competition Act (PCA), which provides that “an agreement consummated in violation of this requirement to notify the Commission shall be considered void and subject the parties to an administrative fine of 1% to 5% of the value of the transaction.”

The agency confirmed that Globe and PLDT had “filed with the PCC new submissions consisting of new materials not previously produced in their initial notice to the PCC. We note, however, that the parties continue to deny that these constitute a refiling.”

“The PCC cannot further comment on the transaction because we have returned the parties’ submissions for non-compliance. As of this time therefore, there is no notice for the PCC to review. We emphasize that the transactions have not been deemed approved,” the PCC added.

PLDT and Globe were also reminded that the PCA has been in effect since August 2015.

“The law is not only about mergers and acquisitions; it also makes illegal, anti-competitive agreements and acts that can be considered abuse of dominant market position, which are separately penalized by the PCA,” the PCC said.

The San Miguel telco acquisition entails P52.08 billion for 100% equity interest in Vega Telecom, Incorporated and the assumption of around P17.02 billion of liabilities.

The deal would allow PLDT and Globe access to 700 megahertz (MHz) frequencies, which they said would help them provide subscribers with “better experience on mobile data and home broadband services.”

Sources who requested anonymity also said that a transition team from PLDT and Globe has already moved to Vega Telecom’s headquarters in Pasig City.

For the PCC, these moves are not allowed until it approves the telcos’ report. But for PLDT and Globe, the PCC has no right to undo their deal based on its own memorandum. – Rappler.com