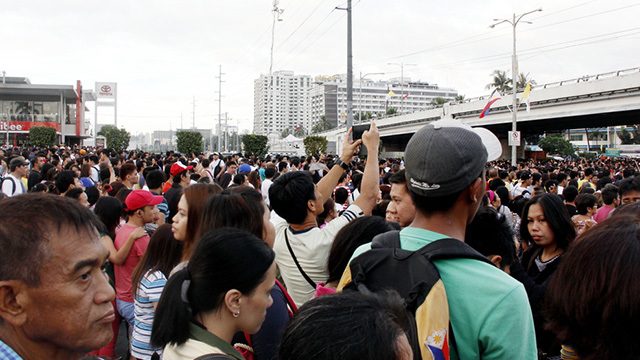 Facebook Twitter Copy URL
Copied
'The undue haste exhibited by the parties to run to the courts to stop PCC's review is now confirmed as unjustified,' the Philippine Competition Commission says

The PCC said in a statement on Friday night, July 22, that the CA has denied Globe’s application for temporary restraining order (TRO) and preliminary injunction against its review of its transaction with PLDT Incorporated and San Miguel.

PLDT and Globe separately filed a Petition for Certiorari and Prohibition with an application for a TRO against the PCC with the Court of Appeals last Tuesday, July 12. (READ: Battle lines drawn over San Miguel’s telco buyout deal)

The CA has yet to issue a decision on PLDT’s separate request to stop the PCC review.

The newly-established commission said the court’s decision to reject Globe’s request “serves to strengthen the PCC’s resolve to closely scrutinize this transaction and examine any possible adverse effects on public welfare.”

“The undue haste exhibited by the parties to run to the courts to stop PCC’s review is now confirmed as unjustified,” the PCC said. (READ: San Miguel’s sale of telco business: Will consumers benefit?)

The commission said it remains hopeful that this development will encourage Globe and other parties concerned to cooperate with the PCC in the fulfillment of its mandate to safeguard free and fair competition.

Rappler sought Globe executives for comment but could not be reached as of press time. (READ: Jobless soon: 400 consultants of scrapped 3rd telco player)

Globe has insisted the “PCC cannot withhold and block the transaction out of a process not found in their own rules, and not disclosed to the public.”

It was on May 30 when PLDT and Globe bought all of San Miguel’s telecommunications assets for P69.1 billion. San Miguel was supposed to launch a 3rd major telco player this year.

The commission then rejected the initial transaction notification of PLDT, Globe, and San Miguel, saying it lacks information and thus is “not deemed approved.”

The telcos said they have “fully and diligently complied” with the notice requirements of the commission’s transitory circulars.

Globe said “there is no ground for PCC to prevent the transaction from being deemed approved.” – Rappler.com