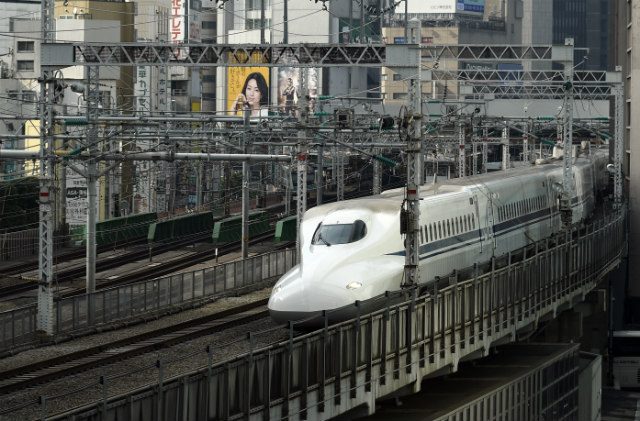 MANILA, Philippines – On March 11, 2011, when a magnitude-9.0 earthquake struck Japan, around 38 high-speed rail trains had been running at the same time in the northern part of the country.

“The 38 trains actually came to a halt – safely. And nobody was hurt,” said Masato Ohtaka, deputy press secretary of the Japanese foreign ministry, in an interview on Friday, August 12.

“Tens of thousands of trains are running every year for the last 50 years, and we’ve had no fatal accidents. Zero. Nobody has died because of our high-speed rail system. It takes a lot of work to do that,” Ohtaka said.

On top of this, he said the average time of delay of their trains “is about 40 seconds or 30 seconds.”

Japan, he explained, is proudest about the safety and punctuality of its 52-year-old Shinkansen train system.

Ohtaka said, “This is something that we would like the Filipino people to enjoy as well.”

This railway, the North-South Commuter Railway Project, is set to connect Tutuban in Manila and Malolos in Bulacan.

In a briefer, the Japanese Embassy said this railway project aims “to strengthen the transportation network and decongest Metro Manila.” This is seen “contributing to the expansion of Metro Manila’s economic sphere and alleviation of air pollution.”

The Malolos-Tutuban railway was one of the topics discussed during the meeting of Philippine President Rodrigo Duterte and Japanese Foreign Minister Fumio Kishida on Thursday, August 11.

Ohtaka also brought up this railway project in a breakfast with a group of Filipino reporters on Friday.

He said the loan for the Manila-Tutuban railway “is one of the biggest Japanese yen loans ever.”

‘We sympathize with Filipinos’

He then pointed out that bulk of the Philippines’ economic activity “is concentrated in the greater Manila area.” He said he knows “how much problems transportation can create” if solutions do not come in a “timely” manner.

“We sympathize with the Filipinos, that this is a project that needs to be done very quickly,” he said.

Ohtaka, however, is unsure if the Philippines will use 100% Japanese technology to build the Malolos-Tutuban railway.

“Maybe not 100%, but I think there will be some competition, too, and it will be for the Filipino authorities to decide, so it will be your option whether you want Japanese technology or you want something different. You just have to compare,” he said.

Ohtaka said there is, in any case, a push for Japanese companies “to be involved.”

This comes as Duterte plans to solve the Philippines’ transportation problems, to the point of seeking emergency powers from Congress.

A month before taking office, Duterte said his first major project “will be a railway.” He also said he was considering China’s offer to build a railway from Metro Manila to Clark, Pampanga, in two years.

The Philippines is known for its dilapidated and often delayed trains. In August 2014 alone, an accident involving the Metro Rail Transit 3 (MRT-3) injured at least 38 passengers and prompted a government probe.

Unlike Japans’ Shinkansen train system that was built in 1964, the Philippines’ MRT-3 is only 16 years old. – Rappler.com