MANILA Philippines – More than 3 years after the project was awarded, the Philippines is set to open a section of the 7.1-kilometer Ninoy Aquino International Airport Expressway (NAIAX) within the first 100 days of President Rodrigo Duterte.

NAIAX is expected to decongest traffic around terminals of the airport.

In a statement on Monday, August 15, Public Works Secretary Mark Villar said the government is “in the process of doing safety checks.”

“We are confident that the public would soon be able to access a key phase of the NAIA Expressway Project within the first 100 days of the President,” Villar said.

The Department of Public Works and Highways (DPWH) said traffic at the domestic and international airport complex in Pasay City will change with the opening of Phase 2 of the NAIA Expressway Project,  which will connect Terminal 1 to Terminal 3.

The first phase of NAIAX is seen to connect Terminal 1 to Macapagal Avenue and Pagcor Entertainment City and is set to be opened in September this year, Transportation Spokesperson Cherie Mercado last week.

“Passenger traffic at NAIA has an average annual growth rate of 9.5%. The cost of congestion per day in Metro Manila is P2.4 billion ($51.65 million). We are keen on ensuring that the chronic traffic congestion at the vicinity of the airport is solved almost immediately,” Villar said.

For now, the DPWH said overall progress of civil works activities is about 79%. 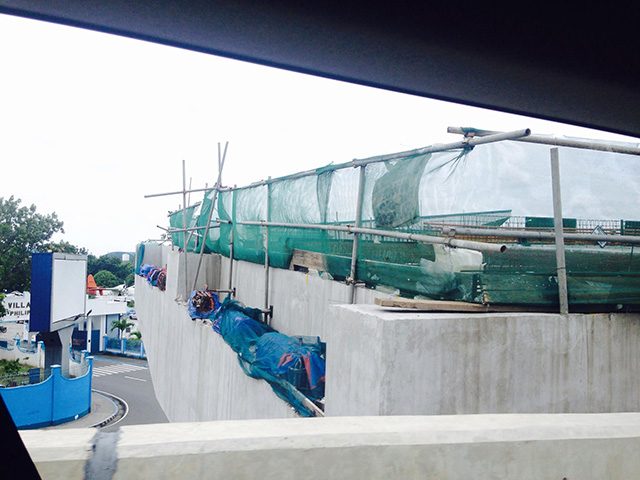 The initial target completion of NAIAX was October 2015, but the project suffered delayed right-of-way acquisition and stalled relocation of utilities.

When all phases are completed, NAIAX is expected to provide easy access to and from all the terminals of the airport and would interface with the South Luzon Expressway (SLEX) through Sales Interchange, Manila-Cavite Expressway (Cavitex), and Macapagal Boulevard.

According to the DPWH, the expressway will significantly reduce average travel time between SLEX and NAIA Terminal 1 to about 8 minutes from the current 24.3 minutes.

The project covers a 30-year concession period starting from the road’s construction. Toll fees for the first two years of operation have been pegged at P35 to P45 ($0.75 to $0.97), with adjustments allowed every two years. – Rappler.com