MANILA, Philippines – The P374.5-billion ($8.08-billion) project to build a subway connecting the cities of Makati, Pasay, and Taguig is being revived by the transportation department under President Rodrigo Duterte.

But it was removed from the PPP pipeline because of scheduling constraints, with officials saying that talks on the subway’s final alignment were “eating up much time.”

The current administration said the subway PPP deal is being revisited because “there is demand for the service.” (READ: 5 failed, shelved PPP projects under Aquino admin)

“It is in the pipeline. We are revisiting it. We are 45 days on the job. [Terms of the project] should be better understood so that when we tender it, we do it right,” Noel Kintanar, transportation undersecretary for rails and toll roads, told reporters on the sidelines of a transportation forum organized by ANC.

Under the old plan, the project would be a 20-kilometer (km) system that will consist of a 16-km tunnel, a 4-km elevated railway, and 11 stations.

The subway system is seen to link the Makati Central Business District, the Mall of Asia in Pasay City, and Bonifacio Global City (BGC) in Taguig. 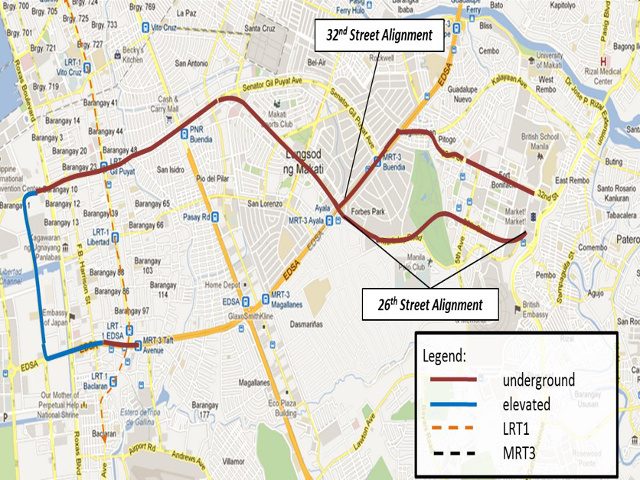 Kintanar told reporters that the LRT1 Cavite Extension, LRT2 operations and maintenance (O&M), LRT Line 4, LRT Line 6, Metro Rail Transit (MRT) Line 7, as well as the extension of the Philippine National Railways (PNR) to Clark, Pampanga and to Los Baños, Laguna are being continued by his department.

The LRT1 Cavite Extension was awarded to Light Rail Manila – a consortium of Ayala Corporation, Metro Pacific Investments Corporation (MPIC), and the Macquarie group – in September 2014.

Light Rail Manila’s directive: rehabilitate the 20 stations and train cars of the LRT1 in 18 months and start the construction of the P64.9-billion ($1.37-billion) LRT1 extension from Baclaran to Bacoor, Cavite in June. The group’s aim is to fully operate the extended line by 2020.

For LRT2 O&M, Kintanar said his department is thinking of expanding the terms of the PPP contract. (READ: LRT2 East, West extension projects to be completed in 2019)

“For the operations and maintenance of the LRT 2, we are looking at expanding it to full PPP. Wrap the west extension deal with the O&M, full rehabiltation of LRT2 trains, rehabilitation of elevators and escalators to a whole project,” Kintanar explained.

Meanwhile, the concessionaire of MRT7 is awaiting the final location of the so-called common station in North EDSA, before it starts construction. (READ: Right-of-way acquisition for MRT7: Zero)

Another project tabled for implementation is the LRT6, a railway system seen to run 19 kilometers from Niyog, Bacoor, to Dasmariñas City in Cavite.

“We are looking at the bankability of the projects before tendering it. We should make sure that it is financially viable for the private investors,” Kintanar said, adding that pre-qualification submission for the LRT6 is scheduled in September.

“Our program isn’t only limited to Metro Manila. We are also looking at other major urban centers like Cebu and Davao. We are consulting the respective communities to know what kinds of projects should be implemented,” the transportation official said.

“What we want to achieve in the next 6 years is to get the process going regardless of whatever happens in the next administration. It’s important that the projects are on the ground. Obviously, we want to finish it sooner rather than later,” Kintanar added, without disclosing timetables for each PPP deal. – Rappler.com