Oct 20, 2016 8:31 PM PHT
Chrisee Dela Paz
Facebook Twitter Copy URL
Copied
Increased Chinese involvement may have the dual effect of reducing the number of PPP projects in the pipeline and fulfilling plans for a 'Golden Age of Infrastructure' in the Philippines, says a research firm 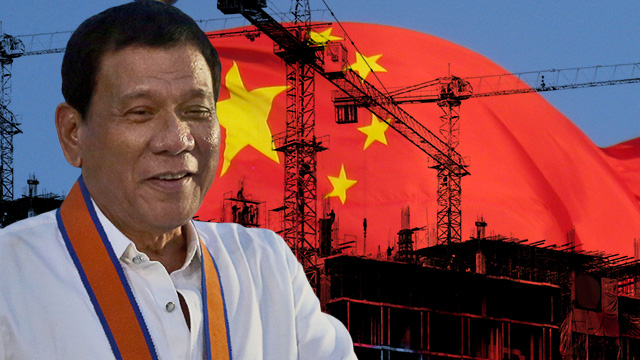 MANILA, Philippines – President Rodrigo Duterte’s pitch for friendlier relations with China will help fund the gap in the Philippines’ infrastructure goals, but is also likely to pose a risk to the country’s burgeoning public-private partnership (PPP) thrust, a research unit of Fitch Ratings said in a report.

BMI Research said in an October 18, 2016 report that increased Chinese involvement may have the dual effect of both reducing the number of PPP projects in the pipeline, as well as helping fulfill the President’s plans for a “Golden Age of Infrastructure” in the country.

During his visit to Beijing, Duterte and Chinese President Xi Jinping signed 13 cooperation deals, including a memorandum of understanding on the lists of transportation and infrastructure projects.

BMI Research said it sees “clear incentives” for both countries: China sees befriending the Philippines as a way of reducing the United States’ influence in Asia, while the Philippines seeks to gain access to China’s generous infrastructure investment packages. (READ: Duterte announces military, economic split from the US)

Inquirer reported that China Railway Group Limited is expected to invest as much as $3 billion in the country’s infrastructure deals, including a massive Mindanao railway system.

CRRC Dalian Company Limited, China’s top train manufacturer, has also expressed intent in improving the country’s railway systems. It is a unit of the company that bagged the contract to supply new 48 coaches for Metro Rail Line Transit 3.

On the sidelines of a congressional hearing, Subic Bay Metropolitan Authority head Martin Diño said that a Chinese company would build a bullet train connecting Clark in Pampanga and Subic in Zambales.

For BMI Research, such deals will help bring to reality Duterte’s plan to spend at least P7 trillion ($144 billion) on infrastructure until his term ends in 2022. (READ: How Duterte’s China trip could help the economy)

This supports the Fitch Ratings unit’s forecast for growth in the construction industry, averaging 8.2% between 2016 and 2020. 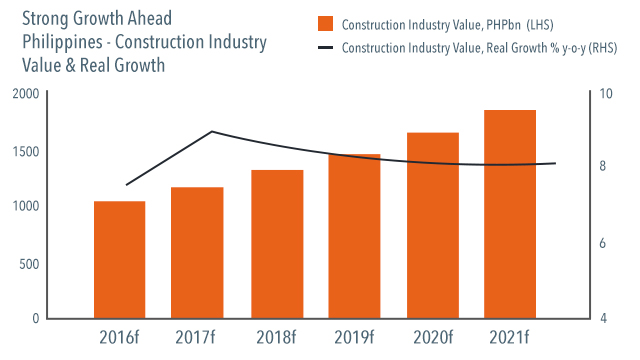 Even the Philippines’ tourism department is discussing with its Chinese counterpart the incentives it can provide to tourism zone investors.

“We are offering a tax holiday for six years to investors as well as tax exemption to equipment that you will bring in,” Tourism Infrastructure and Enterprise Zone Authority (TIEZA) Chief Operating Officer Guiller Asido said in an e-mailed statement.

This is seen to be given to those who will invest in the country’s hospitality, infrastructure, and aviation sectors.

Even before he assumed office, Duterte had pledged to significantly improve the country’s state of infrastructure, which according to BMI Research, scored 59.1 out of 11 ASEAN member nations in its Logistics Risk Index. 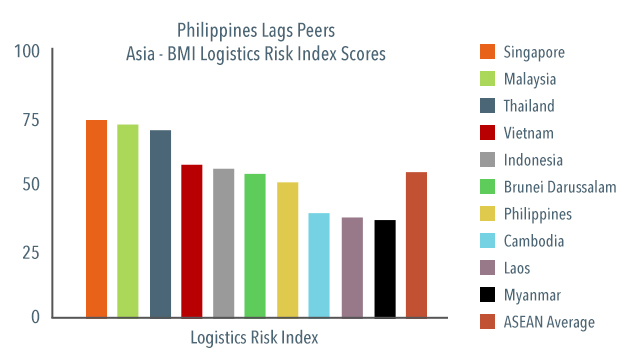 Although Duterte plans to further increase infrastructure expenditure to 7%-8% of gross domestic product through his term, BMI Research said the country is likely to face many of the bureaucratic hurdles and financing bottlenecks that former President Benigno Aquino III had faced.

BMI Research’s Key Projects Database showed that around 97 projects worth more than P2.5 trillion ($52.9 billion) are in the pre-bidding phase.

In a bid to speed up the construction of badly-needed infrastructure deals, Duterte last month approved 9 projects worth P171 billion ($3.5 billion), including a deal to upgrade the Ninoy Aquino International Airport and a project to build a bus rapid transit system in Manila.

While the Duterte administration is continuing PPP projects initiated by Aquino, the unit of Fitch Ratings noted that with its friendlier ties with China, it is more likely to shift to a “government-centered investment approach.”

Data from the PPP Center showed that of the 53 deals implemented, only 3 were completed before the Aquino administration ended.

“As a result, we expect a reduction in the proportion of projects open to private bidders and subsequently greater demand for government budgets to fund infrastructure developments,” BMI Research said. 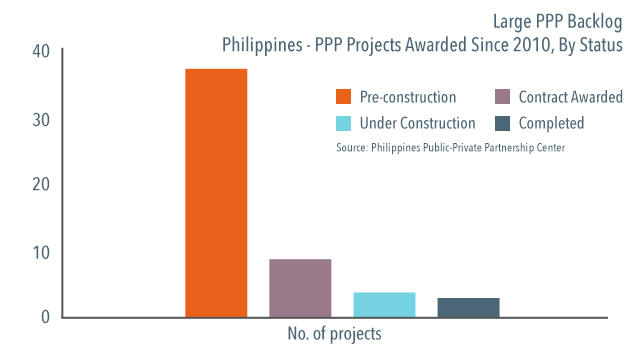 But the increased involvement of Chinese firms in Philippine infrastructure projects also poses some risks, according to the research firm.

BMI Research said one of these is its impact on the previous administration’s efforts to promote the country’s PPP thrust, which includes allowing PPP deals to be listed on the Philippine Stock Exchange.

“China-backed bids will likely be able to undercut competitive private bids and companies which have positioned themselves to expand in the Philippine PPP sector may lose out,” the research firm said.

Another is the ongoing South China Sea dispute.

“Although Duterte has taken a less confrontational approach, there is the risk his position could change in future given his unorthodox political style and populist politics, which would then place into question any China-backed infrastructure projects in the pipeline,” BMI Research said in its report.

The firm also highlighted the impression on Chinese construction projects, which could thwart infrastructure projects in the Philippines.

“A string of accidents in 2015 at the Ha Dong-Cat Linh elevated rail project site – for which China Railway was the main contractor – in Vietnam, resulted in government officials criticizing Chinese contractors of having poor safety practices, a concern that may be present in other markets,” the BMI report read. – Rappler.com