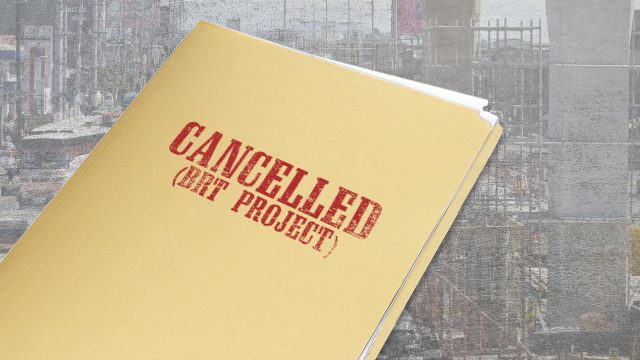 Facebook Twitter Copy URL
Copied
The Department of Transportation requests for the cancellation of the bus rapid transit projects in Metro Manila and Cebu, citing infrastructure limitations. But officials and experts are not sold with the idea

MANILA, Philippines – There might no longer be a bus rapid transit (BRT) project in Metro Manila and Cebu, transportation officials confirmed.

In a message to Rappler, Road Transport Undersecretary Thomas Orbos said that the Department of Transportation (DOTr) had submitted their recommendation to the National Economic and Development Authority (NEDA) to cancel the multi-million project.

“We submitted our recommendation to cancel the project, but please note that it still has to go to the proper project cancellation process, which will be handled by the NEDA ICC (Investment Coordination Committee), and eventually by the NEDA Board,” Orbos said on Thursday, June 7.

“[I]t may be technically difficult or technically not feasible to implement because of the presence of too many flyovers,” Reinoso said.

But legislators, government officials, and experts are not sold on scrapping the idea.

The House committee on Metro Manila development raised a concern over the cancellation of the project in a meeting with the DOTr, NEDA, and Department of Finance (DOF) on Wednesday, June 6.

Two BRT projects were supposed to be implemented in Metro Manila. Line 1 was supposed to run a 12.3-kilometer route from Quezon City Memorial Circle to Manila City Hall via Quezon Avenue.

Meanwhile, Line 2 was supposed to cover a 48.6-kilometer route along EDSA, with integrated routes along the Ortigas and Makati business districts and Bonifacio Global City.

The DOTr had written to the DOF, seeking the cancellation of the project in a December 7, 2017 letter.

The DOTr also wrote to NEDA in May 28, affirming its support for a railway project instead, covering similar planned routes for BRT Line 1.

During the meeting on Wednesday, Transportation Assistant Secretary Arnulfo Fabillar said that the projects had been shelved, subject to further studies.

“You’re asking the public to suffer for the reason we don’t know… You have requested funding from Congress, only to reverse your decision after so many years,” Castelo said.

The lawmaker suggested that the funds allocated for the BRT project be transferred to the Metro Manila Development Authority (MMDA) instead, for the agency to implement the project.

Under the 2018 national budget, an initial P274.78 million had been allocated for the Metro Manila BRT Line 1, while Line 2 received a budget of P300 million.

NEDA had approved both BRT projects. In 2017, the Board identified these as part of the 75 high-impact priority projects of the government.

No Cebu BRT too?

In a document acquired by Rappler, a letter to Finance Secretary Carlos Dominguez, dated April 12, 2018, signified the DOTr’s request to cancel the P11-billion Cebu BRT project.

The DOTr argued that Cebu City’s road infrastructure is not fit for the BRT project, citing the narrow city roads and lack of depots and stations for the project.

“As a result of the city’s limited road infrastructure, the BRT project would be forced to operate on mixed traffic, thus, making the service inefficient. This runs counter to our mandate to provide an efficient, effective, and reliable public land transportation system,” the letter said. The letter was signed by Transportation Secretary Arthur Tugade and Presidential Assistant for the Visayas Michael Dino.

In response, Cebu City Mayor Tomas Osmeña, in a letter to Dominguez on April 18, 2018, requested for the “reinforcement” of the BRT’s approval.

The city mayor argued in his letter obtained by Rappler that “Cebu City will have to suffer for the next 15 years with worsening traffic congestion if the Cebu BRT is cancelled without any viable alternative.”

NEDA Secretary Ernesto Pernia, in response to Osmeña’s letter, said they had instructed the DOTr to review the technical requirements of the BRT project to be completed in the next two months.

NEDA also asked the DOTr to come up “with a more robust evidence including quantitative analysis” to support their recommendation to cancel the project.

An alternative proposal was also sought from the DOTr to be submitted to the NEDA Board by June 30.

The transportation department has been eyeing a 25-kilometer subway project that will cross Mindanao Avenue in Quezon City to the Ninoy Aquino International Airport in Pasay City.

Tugade, in earlier statements, said the groundbreaking ceremony for the project has been scheduled for the end of 2018. Tugade wants the subway project done before 2022.

“It is known that I was not inclined to approve a BRT system at EDSA and Cebu…Can you dedicate one more lane in a place where there are only 3 lanes? Can you dedicate a lane in a system like EDSA, where you have 6 lanes but are already overcrowded?” Tugade said.

In Cebu, a similar railway project is being looked at, but no official proposals have been made, according to transportation officials.

Dino, a known critic of BRT, said in a Facebook post that the project will “not solve the traffic problem but will only worsen it.”

What the Presidential Adviser for the Visayas wants for Cebu City is a railway project instead.

Yet Tugade said that the department will make a “last-ditch effort” to push for the BRT project by meeting World Bank representatives on Friday, June 8. Osmeña, a staunch supporter of the BRT, was not invited, according to a Cebu Daily News report.

Is BRT the solution?

Some experts had earlier described the BRT project as a “fiasco in the making,” citing infrastructure limitations in cities.

But Dayo Montalbo, Associate professor at the University of the Philippines School of Urban and Regional Planning, said BRTs could help bring more people to their destinations because of their capacity.

Montalbo, a faculty fellow at the National Center for Transportation Studies, was part of the team that conducted the feasibility studies for Manila-Quezon Avenue and Cebu BRT projects.

Montalbo pointed out that BRTs have light infrastructure requirements compared to railway projects, which take years to implement.

“The BRT has light [infrastructure] requirements compared to rail-based projects which have civil works requirements – not to mention the higher cost,” he told Rappler in a phone interview on Friday.

He said that BRTs will definitely have dedicated lanes – which shouldn’t be seen as a problem if the priority is mass transit.

With the planned cancellation of BRTs, he said that the government is “implying a support for private vehicles” which is not consistent with sustainable transport policies.

“Who doesn’t want to change the bus system? BRT offers a golden opportunity for reform,” he said. – Rappler.com