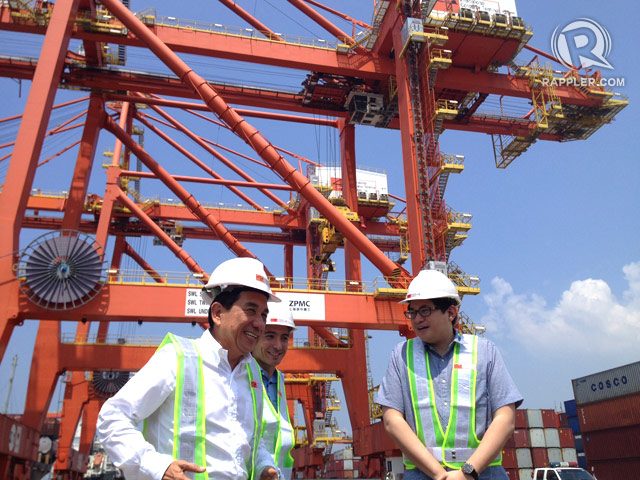 MANILA, Philippines – Diverting shipments to the ports of Batangas and Subic is merely a band-aid solution and would not address congestion at the Manila harbor in the long run, a top executive of the country’s biggest port operator said on Tuesday, October 7.

“People are saying we could go Subic or Batangas. This is not a solution. We need to find a long term solution to make ports viable. And the growth will be coming from Greater Manila, including Cavite which takes up 70% of the demand of imports,” Gonzalez said in a briefing for the Cabinet Cluster on Port Congestion at the ICTSI office.

The Philippine Ports Authority (PPA) earlier tapped the ports of Batangas and Subic as alternate harbors for shipments to ease congestion in the port of Manila.

ICTSI executives and members of the Cabinet Cluster on Port Congestion, were joined by Senator Paolo Benigno Aquino IV, who conducted an ocular inspection at the Manila Harbor to help craft legislation to address the condition of the major port.

The Manila port, the country’s busiest and largest seaport, has started to feel the positive impact of the decision of Manila City officials to lift its daytime truck ban on September 13.

But now that the ban has been lifted, Gonzalez said there are other roadblocks that need to be solved to improve the efficiency of moving containers in and out of the ports.

“We have a very poor road network coming in and out (of the Port of Manila). You have very narrow access to the north, and a busy access to the south. We’re very lucky at the MICT because we have 4 kilometers of controlled roads which allow us to mitigate any queuing that was going on during the truck ban,” Gonzalez said.

The construction of the P18-billion ($403.468 million*) North Luzon and south Luzon expressway (NLEX-SLEX connector road) is seen to be a long-term solution that would increase efficiency of moving shipments at the capital port.

But the project is likely to be completed only in mid-2017, following the Department of Justice (DOJ) opinion to subject the proposal to a Swiss Challenge, according to Manuel V. Pangilinan, chairman of infrastructure giant Metro Pacific Investments Corporation (MPIC).

As port congestion issues persist, Christian Lozano, ICTSI commercial director, said a number of multinational companies have threatened to move out due to the difficulty of securing raw materials into the Philippines, among them, Canon and Epson.

“I’ve convinced some of them to ship through Subic – even if it’s super far. These companies are normally JIT (just in time) so they don’t normally complain about higher costs of trucking,” Lozano said.

What these multinational firms want, he said, is a certainty on where their cargo will be delivered.

“What we’re doing today is to lessen the ships waiting,” he said.

Currently, ICTSI has seen the number of vessels waiting at the docking area go down by 55%, said Gonzalez, who also noted that that the construction of ICTSI’s 7th berth would accommodate even more ships arriving in the capital port.

Operating for more than 25 years now, ICTSI has poured $500 million worth of capital expenditures, including an additional $200 million for its sixth berth. – Rappler.com