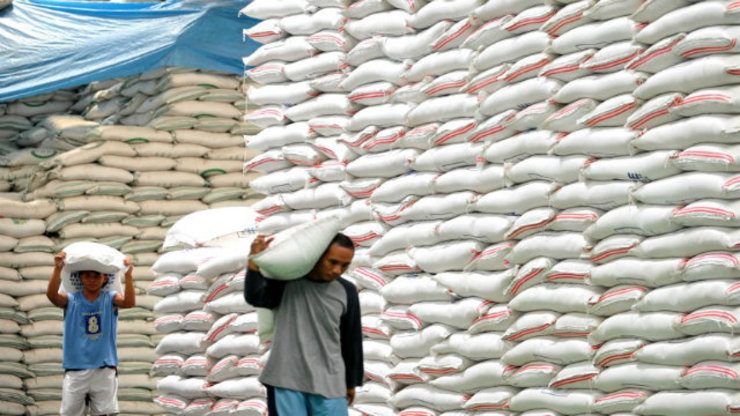 Facebook Twitter Copy URL
Copied
The National Food Authority Council will import 500,000 metric tons of rice for buffer stock, the first tranche of which is expected to arrive in October

MANILA, Philippines – The National Food Authority (NFA) has awarded to Thailand and Vietnam a contract to supply the Philippines with 500,000 metric tons (MT) of rice for buffer stock.

The notice to proceed was issued by the NFA Council a day after its special meeting last September 30.

The terms of references stipulates the delivery of well-milled white rice with 25% broken in 3 tranches from October to December. The supply must be fresh-milled and harvested between January and August 2014.

The first 40% of the volume must be delivered by October; the next 40% by November 15; the remaining 20% by December.

Thailand submitted the best offer for 500,000 MT of rice under a government-to-government procurement mode.

Thailand, represented by its Department of Foreign Trade, offered a selling price of $475 per MT for a total supply of 300,000 MT against a required minimum supply offer of 200,000 MT.

Vietnam agreed to match Thailand’s price offer to be able to supply the balance of 200,000 MT, Pangilinan said.

“Under the terms of reference, if the entire 500,000 MT is not completed, the next lowest bidder can be asked to match the lowest bid. Vietnam agreed to match it for the remaining 200,000 MT,” he said.

On September 15, NFA received supply offers from Thailand, Vietnam, and Cambodia, all of which have rice procurement agreements with the Philippines.

Cambodia was disqualified from participating in the offer because it cannot conform to the delivery period stipulated in the terms of reference, as it would only be able to deliver in April 2015.

In August, the NFA special bids and awards committee rejected all bids for the importation of the 500,000 MT buffer stocks as all offers were way below the government budget of P456.60 ($10.19)* per MT.

As the imported rice buffer stock is on its way, farm gate prices of palay fell at a faster rate in the first week of October, resulting in continued decline in wholesale and retail prices of rice, the Philippine Statistics Authority (PSA) announced Tuesday, October 14.

Both wholesale and retail prices of regular-milled registered contractions during the reference period.