Facebook Twitter Copy URL
Copied
Following its Laguna manufacturing facility expansion, Coca-Cola is bent on expanding its distribution network in the Visayas and Mindanao by 2015

MANILA, Philippines – As its Luzon distribution network is growing, Coca-Cola FEMSA Philippines announced its big plans for the Visayas and Mindanao in 2015.

The company will spend an additional $500 million to reinforce its distribution network in these two areas next year.

With the growth of its distribution network in Luzon, sales growth in Visayas and Mindanao are expected to follow suit, Juan Dominguez, corporate affairs director for Coca-Cola FEMSA Asia Division, said on Monday, November 3 during the inauguration ceremony of the company’s Canlubang plant expansion, Laguna.

Coca-Cola eyes to expand its retail network and improve related infrastructure and equipment such as warehouses and coolers in the Visayas and Mindanao.

“We will have improvements in both markets assets such as warehouses and coolers. We would also be investing in developing the market in the region by tapping more sari-sari (variety) stores and retailers,” Dominguez said.

In the Visayas, more distribution outlets will be set up in Bacolod, Cebu, and Iloilo.

In 2013, the company undertook several expansion and acquisition activities to expand its operations in the Visayas and Mindanao. The efforts included additional two new bottling lines to its Misamis Oriental plant, the rebuilding of its Tacloban plant, and the purchase of a manufacturing facility in Davao del Sur. 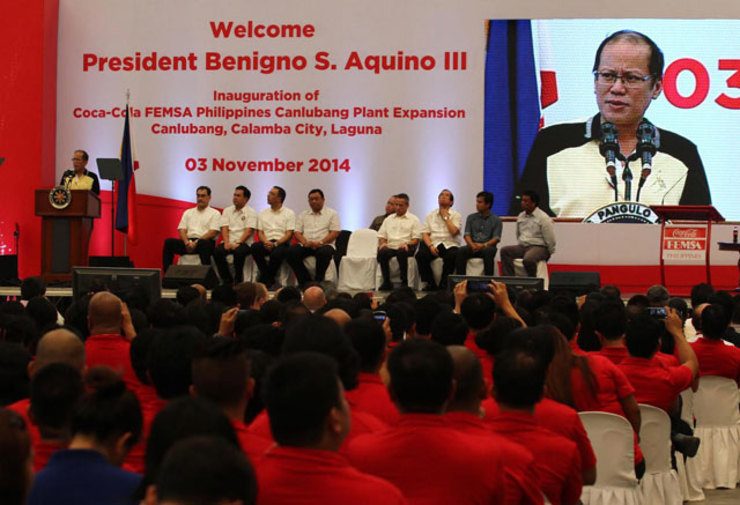 In his keynote address at the inauguration of the newly-expanded Canlubang plant on Monday, President Benigno Aquino III recognized the operational improvements done by the company, particularly in its contribution to post-supertyphoon Yolanda rehabilitation efforts in Tacloban as it rebuilds its plant in the devastated province.

The Davao del Sur plant, meanwhile, was acquired from San Miguel Corporation. It used to be a bottling facility serving the tolling needs of various companies.

Coca-Cola is bullish about growth prospects in the Philippines as Filipinos have a strong affinity with the brand, pointing out that the country is the fastest growing in terms of per capita consumption of soft drinks, Dominguez said.

“We believe firmly in the Philippines and capturing the growth of the Philippines. It is the fastest expanding market in Asia and Filipinos are consistently loving our brand for many years. We want to expand our presence in the market geographically and with the products distributed as well,” Dominguez said.

The additional facilities in the Canlubang plant cover 3.30 hectares in the 15-year-old plant, which remains as one of the largest manufacturing facilities for Coca-Cola in the Philippines.

The expanded Calubang plant is meant to manufacture for the Luzon market. But with the popularity of the 300-milliliter Mismo (Coca-Cola in a “small” bottle), the plant may also serve part of the demand from the Visayas market.

To date, Coca-Cola FEMSA Philippines operates 22 plants and 47 sales offices in the country and employs 8,000 workers.

Nearly two years after its incorporation, the company has enhanced its existing production lines and sales and delivery model. It also employed 2,000 new workers.

By the 3rd year of its corporation, the company would have invested about $1.7 billion in its Philippine operations.

Coca Cola FEMSA acquired what was then Coca-Cola Bottlers Philippines in an all-cash transaction of $688.5 million in January 2013, resulting to the formation of Coca-Cola FEMSA Philippines. – Rappler.com