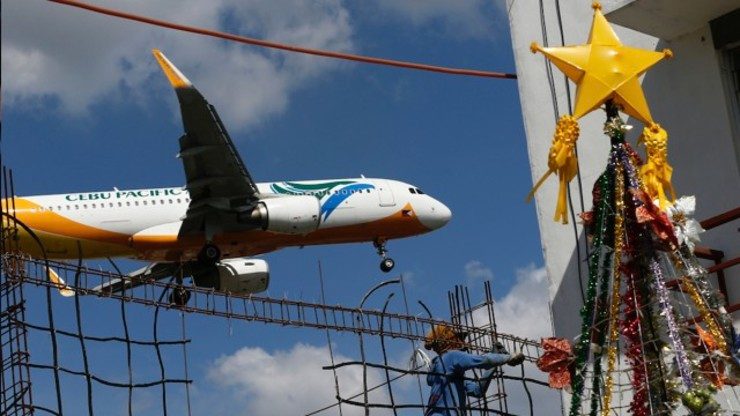 Facebook Twitter Copy URL
Copied
The Civil Aeronautics Board imposes a P5,000 fine for every affected 10,400 passengers of the budget carrier

MANILA, Philippines – “It’s about time. The airline is being irresponsible and it should not happen again.”

Luciano said the regulator decided to impose a punitive fine on Cebu Pacific after receiving thousands of complaints for flight delays and cancellations that started December 24.

A total of 10,400 passengers were affected by the flight delays and cancellations, Luciano said.

“Cebu Pacific was fined P52 million ($1.16 million). That was based on the 10,400 passengers that were affected by delays and cancellations on December 24, 25, and 26,” Luciano added over a telephone interview.

“They are in public service and high absenteeism is not a reason for flight delays and cancellations,” Luciano said.

The agency also decided to issue a strong reprimand to Cebu Pacific on top of the hefty fine, CAB executive director Carmelo Arcilla said in a text message.

The CAB Board also required Cebu Pacific to establish and maintain appropriate service standards for all its personnel, organic and outsourced, especially those manning the check-in counters, Arcilla added.

“After considering all available data and arguments, the Board concluded that the main culprit was Cebu Pacific’s operational lapses and mishandling of passengers,” Arcilla said.

“The flying public deserves much better service than that. We sympathize with those who lost precious hours with their families and loved ones on Christmas, and we will see to it that Cebu Pacific will answer for any possible mismanagement,” Abaya previously said.

Cebu Pacific is blaming air traffic congestion, but this does not appear to be “supported by the facts that caused its delayed flights,” Abaya added.

In the morning of Dec. 26 alone, the head of the Department of Transportation and Communications (DOTC) said 6 flights of Cebu Pacific arrived late at the Ninoy Aquino International Airport (NAIA).

Data submitted by Cebu Pacific to the investigating panel showed that a total of 288 flights were delayed while 20 flights were cancelled between Dec. 24 and Dec. 26.

Of the 145 flights scheduled last December 24, Cebu Pacific said 102 were delayed while 13 were cancelled.

On Christmas day, 79 of the total 149 flights were delayed while 3 were called off.

Cebu Pacific could still file an appeal before the CAB Board. – Rappler.com