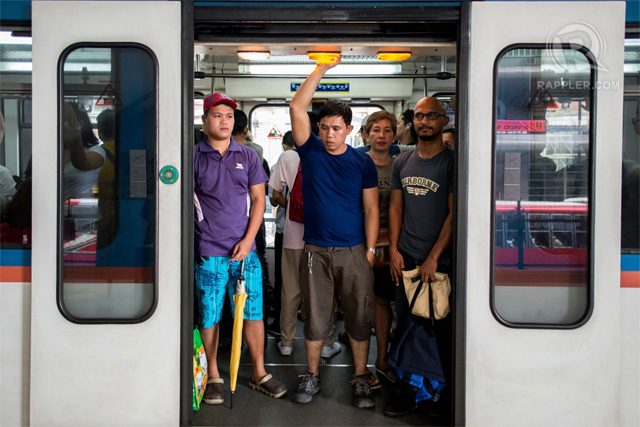 MANILA, Philippines – The Department of Transportation and Communications (DOTC) said it will appoint several operation and maintenance (O&M) contractors next month to address the long queues passengers are experiencing at the aging Metro Rail Transit Line 3 (MRT3).

DOTC Secretary Joseph Emilio Abaya said in a media briefing Monday, May 11 that his agency is set to award a multi-discipline contract covering 6 months of O&M of the most congested elevated mass transit system. The cost of the contract is P342 million ($7.66 million), he added.

This means several contractors will be tasked to operate and maintain specific components of the MRT3, and the awarding of such contract is slated in June..

This decision comes on the heels of complaints from passengers due to long queues during rush hour, technical glitches, and safety lapses, including having the train run with its doors open. This had earlier prompted a congressional hearing.

According to Abaya, current MRT3 maintenance provider Autre Porte Technique Global Incorporated (APT Global) has only been deploying “8 to 10 trains instead of the required 20 trains during rush hour.”

“The waiting time for trains was extended to 10 minutes instead of the regular 4 train; this has been the cause of long queues recently at the MRT3,” the DOTC chief added.

The mass transit system has 13 stations stretching 16.7 kilometers along EDSA from Taft Avenue to North Ave. in Quezon City.

Abaya added the prototype train from Dalian Locomotive and Rolling Stock of China would be delivered in August as part of a P3.8-billion ($85.11 million) contract involving the supply of 48 new light rail vehicles (LRVs) to ensure the arrival of trains every 2.5 minutes.

Several groups such as infrastructure giant Metro Pacific Investments Corporation (MPIC) and a German-Filipino consortium have offered to upgrade the operations of MRT3.

“We aren’t rejecting yet their unsolicited offers; but as I’ve said before, we are inclined to pursue an open, transparent bidding,” Abaya told reporters.

MPIC, which has an option over 48% stake in Metro Rail Transit Corporation (MRTC), submitted a cheaper P23.40-billion ($524-million) proposal to operate and expand the operations of MRT3 – lower than the original P25.24-billion ($565-million) proposal. The revised proposal involves no guarantee from the government, absorption of market risk, and a fare increase of P28 ($0.63).

The consortium of Schunk Buhn, HEAG mobile GmbH, and Comm Builders & Technology Philippines Incorporated has submitted a proposal to rehabilitate MRT3 along EDSA that is P116 million ($2.60 million) cheaper than the P4.76-billion ($106.6 million) budget of the government.

The fresh maintenance contract now being auctioned off is good for every 6 months only since by 2016, the government hopes it would bid out a longer term for the O&M of MRT3. (READ: New MRT3 maintenance provider eyed in May) – Rappler.com