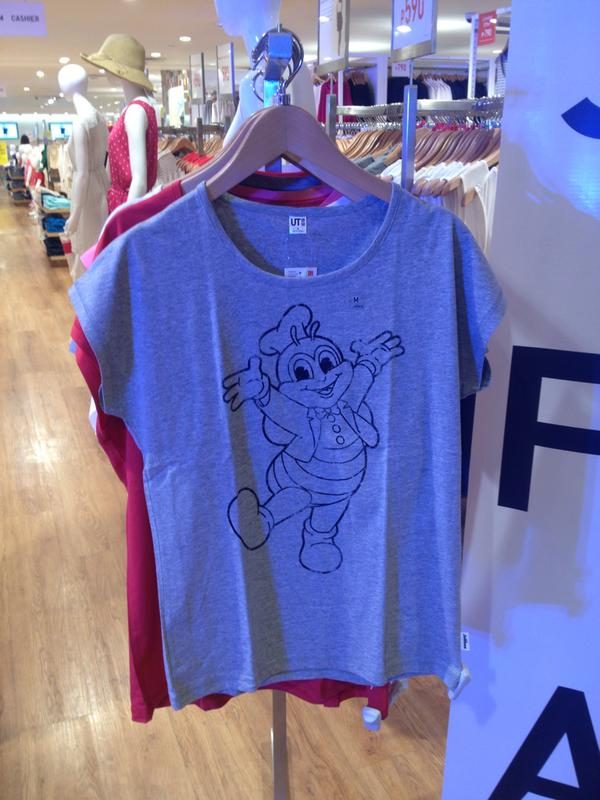 MANILA, Philippines (UPDATED) – When Uniqlo (short for “Unique Clothing”) entered the Philippines in 2012, it was already looking for a local yet globally-known brand to collaborate with. It took them a while to find one.

For its seasonal limited edition UT (Uniqlo T-shirts), the Japanese casual clothing retailer has been known to collaborate with famous fashion labels from different countries, or with global brands like Disney or Coca-Cola.

Such collaboration helps the fashion labels become more visible and within reach of a wider market. Global brands which become Uniqlo’s partners are chosen not because they are big or popular, but because they espouse the same values as the Japanese brand, said Katsumi Kubota, chief operating officer of Fast Retailing Philippines Incorporated.

So when Uniqlo saw Jollibee, Kubota said, it knew early on that the fastfood giant would make a great, collaborative partner.

After studying the 37-year-old Jollibee and learning about its success, Uniqlo wanted to bring “happiness” to Filipino consumers “without losing its being Japanese.” It sought out the fastfood giant.

After 10 months of negotiations, the partnership was forged and the designs for the limited edition, one-season Jollibee UT line were finalized. A ceremonial signing was done on Wednesday, May 27, at Uniqlo’s Megamall B branch in Mandaluyong City.

Jollibee Philippines vice president for marketing Harvey Ong said that while Jollibee introduced a kids’ apparel line way back, the partnership with Uniqlo is the first in terms of reach and scale.

“We never thought we’d get into apparel, but Uniqlo approached us. Uniqlo is our first global partner, and Jollibee is Uniqlo’s first Filipino partner,” Ong said.

Ong added that no Filipino casual clothing retailer approached Jollibee for a partnership like Uniqlo offered. Ong said the fastfood giant and Uniqlo share similarities that make them good partners. They both have humble beginnings, strong appeal to the young market, and the mission to give back to the community.

Tanbuntiong added that he and his family admire how Uniqlo stores are clean, orderly, very organized, and provide value for consumer’s money – considerations that Jollibee also has for its loyal customers.

“Every time I come to this Uniqlo branch, I always looked at the merchandise and saw all these other brands [for Uniqlo t-shirts]. I wondered, ‘When would Jollibee have its own Uniqlo t-shirt?’ So when I heard this news (collaboration), I got so excited. I’m very happy,” Tanbuntiong said.

The collaboration is the first in the Philippines for Uniqlo, which eyes more partnerships with other homegrown brands that have global appeal like Jollibee.

The Jollibee T-shirts will not only be sold in Uniqlo stores in the Philippines, but also in other Southeast Asian countries, like Indonesia, Malaysia, and Thailand.

Tanbuntiong said exposing the T-shirt line in markets where Jollibee has no presence yet, but already has a strong following will further boost the brand’s potential in the growing ASEAN region. “The Jollibee t-shirt will be there first before the store,” he said with a laugh.

Both brands are also bullish for their growth prospects this year.

Uniqlo has 23 stores in the country, and is planning to open several more in 2015, Kubota said, without giving specifics.

It is also relaunching its branches in SM Fairview and Dasmariñas. By relaunching, the stores will be smaller in space and carry specific lines that are suited for the customers in these locations, Kubota said. He added that the SM Fairview branch was also about the same size for sales floors as the flagship store in Mall of Asia, thus the need to “make it more suitable.”

Also starting Friday, May 29, Uniqlo has celebratory promos in time for its third year in the country.

For Jollibee’s part, Tanbuntiong said the company is right on track with its expansion plans for the year, eyeing an estimated 50 more stores this year. “In first-tier cities and municipalities in the country, we already have stores there. We’re now looking at second- and third-tier to put up our stores,” he said.

“Similarly we’re also aggressive in opening stores overseas,” he said. Jollibee recently opened in Dubai; announced plans to put a store in Chicago; and in the lookout to have Jollibee in Europe.

Last year, the Jollibee group had to temporarily close over 70 stores under its umbrella due to IT migration problem. Asked about this, Tanbuntiong said that things are progressing well now.

“We’re almost there. We’re nearing complete normalization. We target to complete it (IT migration) this year,” he said.

As for their future as partners, Jollibee and Uniqlo executives were asked if they are already discussing plans to extend their collaboration. Kubota said the brands are like “lovers” who just met, and they are still in the process of getting to know each other, but everything is possible.

“We’re open to tie-ups, and we’ll let the expert (like Uniqlo) do their part. But in terms of focus, our business is still fastfood – the Yum (burger), Jolly spaghetti, Chickenjoy. That’s what we do best and we’ll continue to focus on that (fastfood),” Tanbuntiong said.

And as both brands have well-established corporate social responsibility efforts, Tanbuntiong said that Jollibee and Uniqlo could consider to jointly have a “giving back to the community” activity.

“That’s a good idea,” he replied, when asked.

The t-shirts, available in 6 designs of the Jollibee logo and mascot, will be available in Uniqlo stores starting Monday, June 1, at P390 ($8.72) each. – Rappler.com