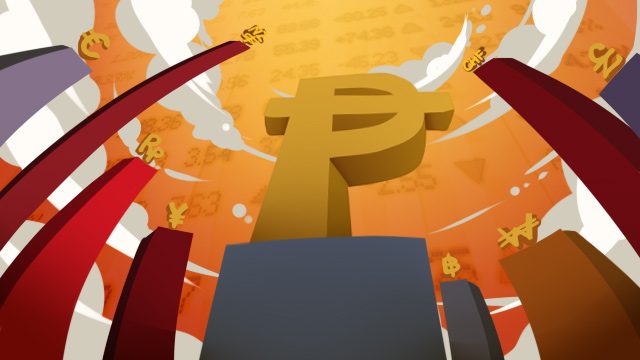 MANILA, Philippines – The Philippine peso has been the second least volatile among Asian currencies in what has been a tumultuous year. This, amid the Greek debt crisis and the stock market collapse in China.

Data from the Bangko Sentral ng Pilipinas (BSP) showed that the volatility of the peso, the degree of its daily fluctuation, stood at 0.77 %.

The least volatile among major currencies in Asia, the Chinese Yuan, stood at 0.37%.

The peso is “ basically moving together with other regional currencies,” BSP Governor Amando Tetangco Jr said from the sidelines of an Appreciation Lunch for BSP Stakeholders, held at its Pasay City headquarters on July 14.

Tetangco explained that sometimes the peso weakens one day but then recovers the next, always within an acceptable range.

The BSP’s policy is to let the market determine the value of the peso although it does intervene if needed to avoid too much fluctuation.

“This should, to me, indicate that the funds are not moving out of these countries or economies on a big way. There may be some declines in stock markets, but the funds, I would say, tend to stay within the country,” he said.

The BSP chief said that there was still cause to be wary, however, as the situations in Greece and China have not been fully resolved.

Eurozone leaders reached a unanimous decision agreeing to a 3-year bail out deal worth between 82 billion (P4.02 trillion)  and 86 billion (P4.28 trillion) euros for Greece on July 13.

The agreement, however, hinges on approval by both the Greek parliament and Eurozone countries.

“The EU agreement, forestalling a Grexit, takes away one layer of market uncertainty. The market will continue, however, to watch out for the details to implement this deal,” Tetangco said.

Other situations to watch for include the impending interest rate hike by the US Fed, as well as the stock market collapse in China.

Markets will continue to watch out for signals from the US Fed and whether the government support in China is enough to halt stock market declines, he explained.

He reiterated, however, that the country’s strong macroeconomic fundamentals would allow the Philippines to survive external shocks.

“Our economy has fundamental strength. Inflation is seen to remain low and we have policy space and can quickly put in place measures should such be needed to support growth, manage inflation, or contain financial stability pressures,” Tetangco said. – Rappler.com