(UPDATED) Celina Garcia, 41, a mother and a bank officer, leaves home in Marikina City at 5:30 am to bring her child to school.

Her child eats breakfast in the backseat of the car during the 20-minute ride. It will take her two hours to drive from her child’s school to her workplace in Makati City.

With one mode and one stop, she travels an average of two hours and 20 minutes each way. This kind of travel is common among Filipino motorists and commuters – a huge waste of time in social terms.

“For us, car is important to travel within Metro Manila, as public modes of transport, like the MRT3 (Metro Rail Transit Line 3), is more time-consuming, unreliable, and not safe,” Garcia said.

She said she is “losing hope” in the country’s urban transport.

The country’s public-private partnership (PPP) thrust was envisioned to address these woes. But 5 years since its kickoff in 2010, did the flagship program of President Benigno Aquino III fail to meet expectations?

In an interview, PPP Center executive director Cosette Canilao said the government expects these 5 infrastructure projects to be completed by mid-2016:

Other than these 5 PPP deals, the Aquino administration has awarded 5 other PPP deals so far, but none of these have seen completion yet. These are the:

Encouraged by this success, the PPP Center lined up about 60 PPP deals in the pipeline that it is also actively marketing to foreign investors through international roadshows. 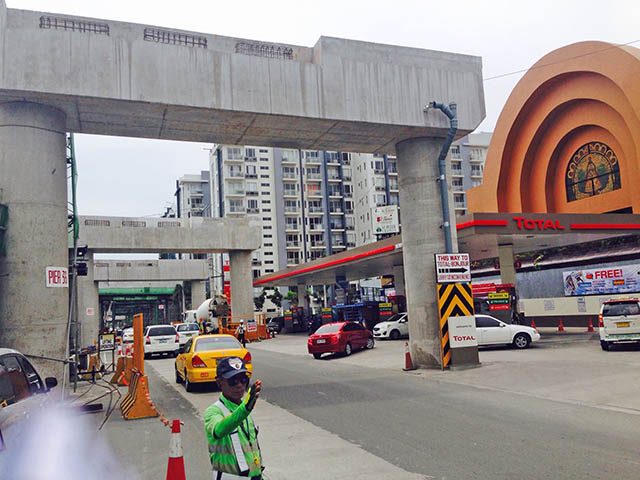 The mood, however, changed because of notable delays in tariff adjustments in some power, water, and toll road PPP deals; right-of-way disputes; as well as changes in the rule of the game.

The major win for the Aquino administration, the 7.1-kilometer NAIA Expressway (NAIAX) Phase II, has been on the drawing board since May 2013, but until now, it remains uncompleted.

This was because implementing agency Department of Public Works and Highways was not able to fulfill its promise of giving winning concessionaire San Miguel Holdings Corporation (SMHC) full right-of-way delivery by April 2014.

Now, the completion of the project has been pushed back by a year.

The contract to modernize the Philippine Orthopedic Center also hit a roadblock – health workers and party-list organizations filed a petition against the “privatization” of the state hospital. Right of way, changes in rules

The construction of a new Cebu airport terminal was even set back by 5 months because of a right-of-way issue.

The most complicated PPP deal to date, the Light Rail Transit line 1 (LRT1) Cavite extension project, has also been subjected to repeated feasibility studies, bid out twice, and is now stalled because of a legal tussle.

The first bidding in August 2013 failed due to misallocation of risk and insufficiency of allowed subsidy. It was put on the auction block again in May 2014 with the lone bidder, the group of Metro Pacific Investments Corporation and Ayala Corporation, winning the project.

The construction of the project has not even started yet due to an ongoing legal tussle involving the location of a “common station” shared with another rail line.

The cost of these issues on LRT1 Cavite extension project? About a year’s delay and millions of foregone revenue.

For the controversial road deal Cavite-Laguna Expressway project (CALAX), the government has declared a failure of bidding and conducted a second round after an appeal from disqualified bidder San Miguel Corporation (SMC) over a non-compliant bid security.

Afterwards, SMC announced it was supposed to bid for a premium fee of P20.1 billion ($444.28 million), much higher than highest complying bidder Team Orion’s P11.67 billion ($257.95 million). The Philippine government eventually gave the Ramon Ang-led company another chance through a fresh round of bidding.

“We believe that rules should not be changed mid-stream. The government’s decision to dishonor the rules that they themselves wrote ruins the credibility of the entire PPP program,” CLSA Philippines, Incorporated Research Analyst Ignacio Gonzales said in his report dated November 2014.

“This will definitely deter foreign and local investors from participating in future biddings – a potentially bigger loss than the opportunity cost of not accepting San Miguel’s bid,” he added.

But from where it started in 2010, the PPP Center has made significant strides in terms of rolling out projects and building a robust pipeline of infrastructure deals.

PPP Center’s Canilao told Rappler that the government targets to award 21 projects more before Aquino steps down. She admits, however, that this target “could be hurdled by unforeseen challenges along the way.”

“The challenges notwithstanding, we think the PPP program will continue to be a necessary feature because of constrained public resources and ability to tap into private sector technical, financial, and managerial expertise,” read a December 2014 report from GlobalSource Partners and Lazaro Bernardo Tiu & Associates (LBT&A) Incorporated.

“At the end of the day, it is the assurance of a predictable legal and regulatory environment during the bidding and award stage and over project life that will kindle private sector interest and achieve value for money for the public sector,” LBT&A’s Romeo Bernardo and Marie Christine Tang said in the report.

The next administration could inherit fewer PPP headaches if the changes in the decades-old Build-Operate-Transfer (BOT) Law are implemented under Aquino’s watch.

Amendments to the BOT Law, including a longer timeframe for challenging an unsolicited proposal and the standardization of contract templates for PPP projects, are expected to be passed by mid-2016, Canilao said.

For University of Asia and the Pacific senior economist Victor Abola, the country’s PPP thrust is “work in progress.”

“Reforms don’t happen overnight. I hope the next administration will learn from what this current administration experienced. Changes in BOT Law are the start,” Abola said.

With the passage of amendments to the BOT law too, Aquino made sure in his 2014 State of the Nation Address that the program would outlast his term.

If delays continue to hound the implementation of these infrastructure deals, it is not only Garcia who will continue to suffer, but also the estimated 1.1 million daily MRT3 and LRT1 riders.

For commuters like Garcia, these projects will not help unless construction is completed.

The 41-year-old bank officer said her family is thinking of renting a place near her office and transferring her child to another school close to her workplace to save time.

“If our Plan B won’t work, my child will need to have her breakfast at the backseat of our car every weekday just to be in time for her school and for my work,” Garcia said. – Rappler.com