Extreme poverty jumps in Italy on back of COVID-19 woes 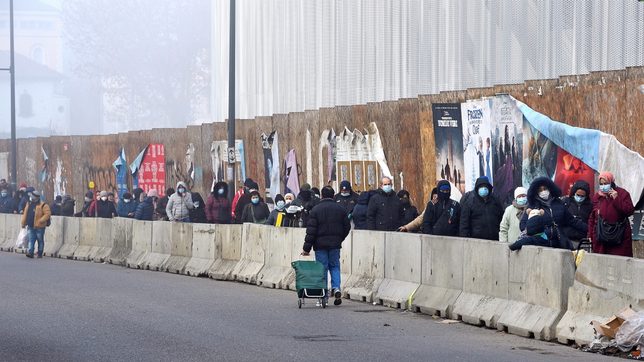 AID. People queue for free food as Italians struggle to cope in a tough economic climate amid the coronavirus pandemic in Milan, Italy, December 14, 2020.

The number of Italians living in absolute poverty rose sharply in 2020 to its highest level for at least 15 years as the coronavirus crisis brought economic pain to much of the country, data showed on Wednesday, June 16.

Last year, about 5.6 million people, or 9.4% of the population, lived in absolute poverty, defined as those unable to buy goods and services essential to achieve “a minimally acceptable standard of living,” national statistics bureau ISTAT said.

In terms of families, slightly more than two million households were mired in absolute poverty last year – 7.7% of the total, up from 6.4% in 2019. In the poorer south, 9.4% of families lived in severe poverty, while in the north, the figure stood at 7.6%.

Italy’s economy shrank by 8.9% in 2020, its steepest post-war recession, with lockdowns aimed at slowing the spread of the coronavirus slamming businesses.

The worst-hit group were foreigners, with 29.3% of registered migrants – some 1.5 million people – living in extreme poverty against 7.5% for those with Italian nationality.

However, the number of Italians living in “relative poverty” – those whose disposable income is less than around half the national average – fell to 13.5% of the population last year from a previous 14.7%.

ISTAT said the decline was due to a sharp fall in household spending across the board, which influenced the calculus. – Rappler.com