Facebook Twitter Copy URL
Copied
A document that has since been deleted from the Sugar Regulatory Administration's website shows President Ferdinand Marcos Jr. approved 300,000 metric tons of sugar imports. Malacañang says he did not. 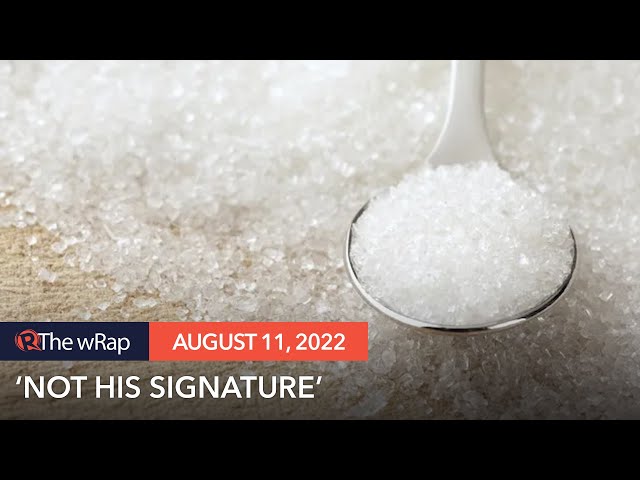 The SRA’s Sugar Order No. 4 showed that the President approved the importation, as refined sugar prices have soared to over P100 per kilo.

The SRA also noted that sugar production is projected to be lower by 16% and will not meet demand, hence the need to import.

But Press Secretary Trixie Cruz-Angeles said Marcos rejected the proposal to import sugar. Angeles also said the signature on the document is not the President’s.

“He is the chairman of the Sugar Regulatory Board and denied this in no uncertain terms…. The President did not sign that,” Angeles told reporters.

Comparing the signature on Sugar Order No. 4 to past issuances, the document appears to be signed on behalf of the President by Agriculture Undersecretary Leocadio Sebastian.

The Department of Agriculture and the SRA have yet to respond to queries regarding Malacañang’s denial. The document is also now unavailable on the SRA website.

Marcos earlier designated Sebastian as his alternate to the SRA Board.

The SRA partly blames high sugar prices and lower sugar production on “residual effects” of Typhoon Odette (Rai), which struck in December 2021, and rainy weather in the past months.

The SRA tried to green-light 200,000 metric tons of imported refined and bottlers’ grade sugar for industrial users earlier in 2022 through Sugar Order No. 3. But in March, the move was blocked by legal action from local sugar producers who feared the importation of cheaper sugar would harm their businesses. (READ: Hip online cake shops to street-side bakeries feel brunt of pricier sugar, flour)

“If [Sugar Order No. 3] had been implemented according to schedule, we would have been able to address the demand of the manufacturers early on, prices would not be this high, and our raw sugar and refined sugar supply would not be at this critical volume,” SRA Administrator Hermenegildo Serafica said in a statement in late June. – Rappler.com