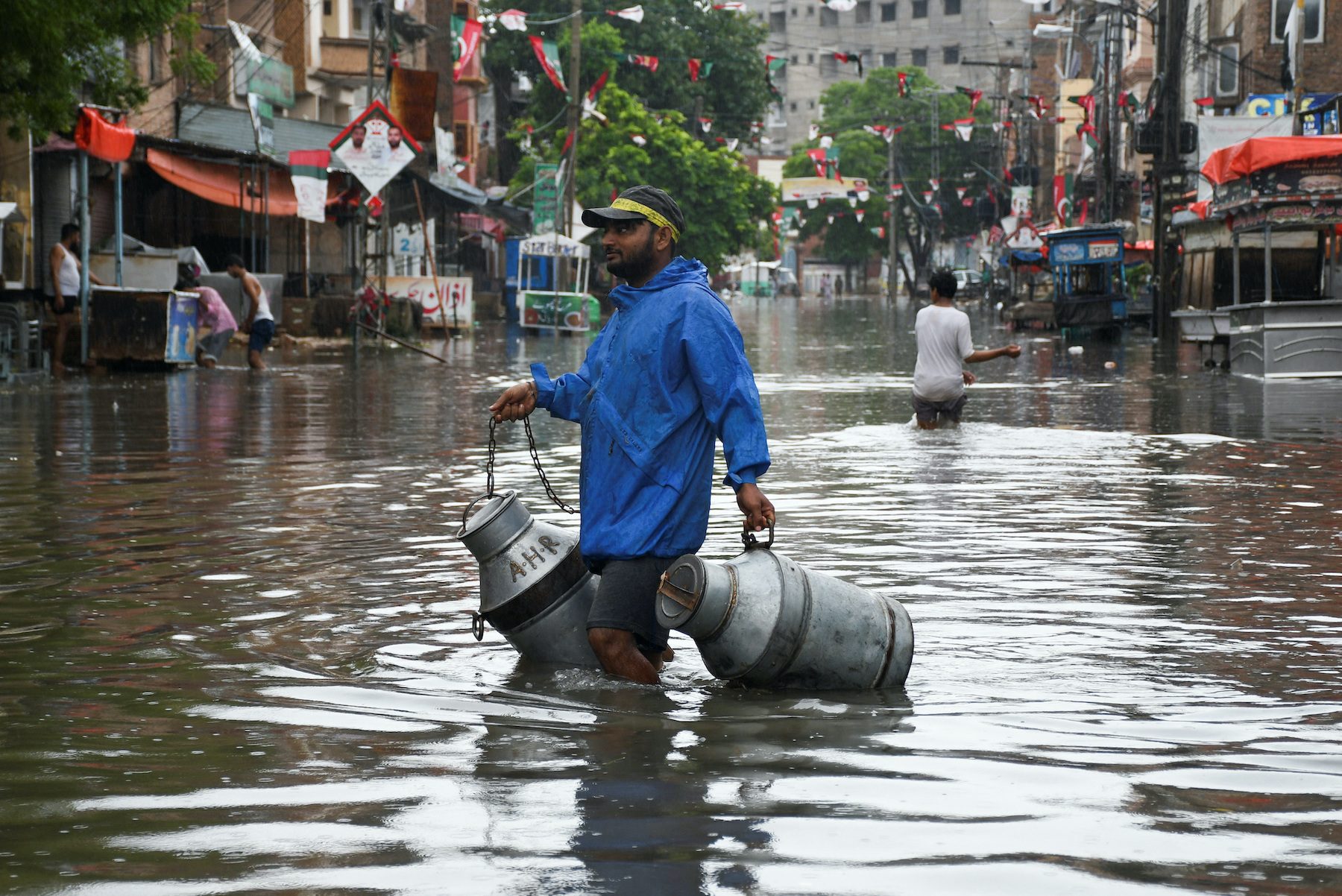 FLOODING. A man with milk canisters walks along a flooded street, following rain during the monsoon season in Hyderabad, Pakistan, August 24, 2022.

KARACHI, Pakistan – Dipping a roller into a tray of blue paint, Mohammad Rashid counts his losses after record monsoon rain forced him to hang up his overalls for weeks on end, adding to his money worries as an economic crisis grips Pakistan.

Millions of low-income small business owners and self-employed workers like Rashid are struggling to repair damage and recover lost earnings due to the heavy rain and devastating floods that have killed more than 1,000 people since June.

In Rashid’s home city of Karachi, the country’s largest, weeks of rain left the streets knee-deep in water and sludge and meant he could only work five days in July – Pakistan’s wettest for three decades.

Facing a balance of payments crunch, Pakistan is finding it difficult to fund reconstruction efforts after the floods due to spending curbs as it awaits bailout money from the International Monetary Fund.

The government has announced cash support to families, but almost nothing has been offered to small businesses for damaged property and goods, and many traders say they feel abandoned.

“[The government] is killing us slowly,” said Mohammad Hamid, 27, at his shop where he sells and repairs printers.

He said he suffered losses due to getting stuck daily for hours on Karachi’s flooded roads. But his biggest problem is soaring prices that are hiking the cost of doing business – and undoing his gradual recovery from the impact of COVID-19.

“The powder used in the ink cartridges of printers has become expensive, but customers refuse to pay me if I increase my charges proportionately,” said Hamid, who has been dipping into his savings to provide for his family of seven.

While the monsoon brings a wave of destruction almost every year, successive governments have failed to adequately warn and prepare for its impact, say climate experts, warning that climate change is fueling extreme weather.

“What you see today is just a trailer of what’s in store for us with poverty, hunger, malnutrition, and disease if we don’t pay heed to climate change,” said climate change and development expert Ali Tauqeer Sheikh.

From tailors and cobblers to repairmen, traders worry that without any concrete policies to cut climate change-related risks – especially at a time when financial pressures keep piling – their businesses could go under.

Prime Minister Shehbaz Sharif formed a task force to mitigate the effects of climate change during an intense heatwave in May, and last week chaired a Cabinet meeting to discuss the quick implementation of climate adaptation policies.

“Gone are the days when climate change was the subject of drawing room discussions. It is affecting our everyday life. Food and water security is directly linked to climate hazards,” he posted on Twitter after the meeting.

But for Talat Shaheen, a mother of six who intermittently lives and works at small home-based garment factories, the government needs to do more.

“Rains may be one factor, but factories are not getting work as the purchasing power of people has diminished since the pandemic,” said Shaheen, whose husband has been unemployed for two years.

On a good day she earns up to 1,000 rupees, but such days are “getting scarcer.”

“No work means sharing a 50-rupee plate of cooked lentils and rice between the eight of us,” she said, adding that they were forced to starve with prices of basic items such as cooking oil and flour having nearly trebled.

“What can the poor eat?” – Rappler.com