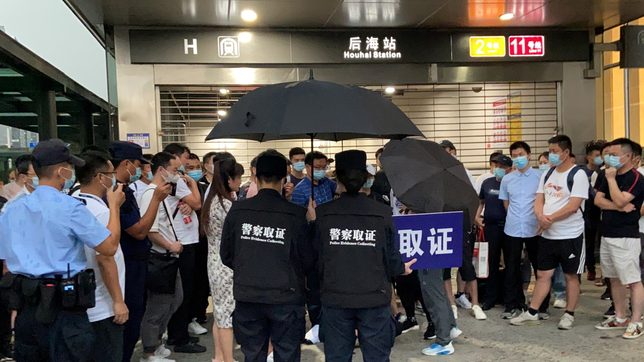 DEMONSTRATION. Police officers hold a sign reading 'collect evidence' and film protesters after they started chanting 'Evergrande give us back our money,' outside Evergrande's headquarters in Shenzhen, Guangdong province, China, September 16, 2021.

Security personnel in the Chinese city of Shenzhen on Thursday, September 16, took away protesters who gathered outside the headquarters of cash-strapped real estate developer China Evergrande Group.

The country’s second biggest property developer is wrestling with a liquidity crisis, scrambling to raise funds as it teeters between a messy meltdown with far-reaching impacts, a managed collapse, or a government bailout.

Disgruntled Evergrande investors as well as vendors who say they are owed money have gathered this week at company headquarters in the southern city and reportedly elsewhere in China.

“Every day we’re here waiting for some sort of policy for us but nothing comes, so we have no choice but to stay,” one protester said.

Uniformed security could be seen detaining at least two among about two dozen protesters and forming a circle around those who remained, locking arms so that none could leave while the two were taken away.

Security personnel responded to sporadic chants of “Evergrande return our money” by waving a banner that said “police evidence” while an officer filmed the protesters who were shouting.

During a thunderstorm, a crying woman who was sitting among remaining protesters and approaching security personnel was carried away to a nearby police van. On Monday, September 13, Reuters reported that about 100 protesters had crowded into the company’s lobby that day to demand repayment of loans and financial products. – Rappler.com