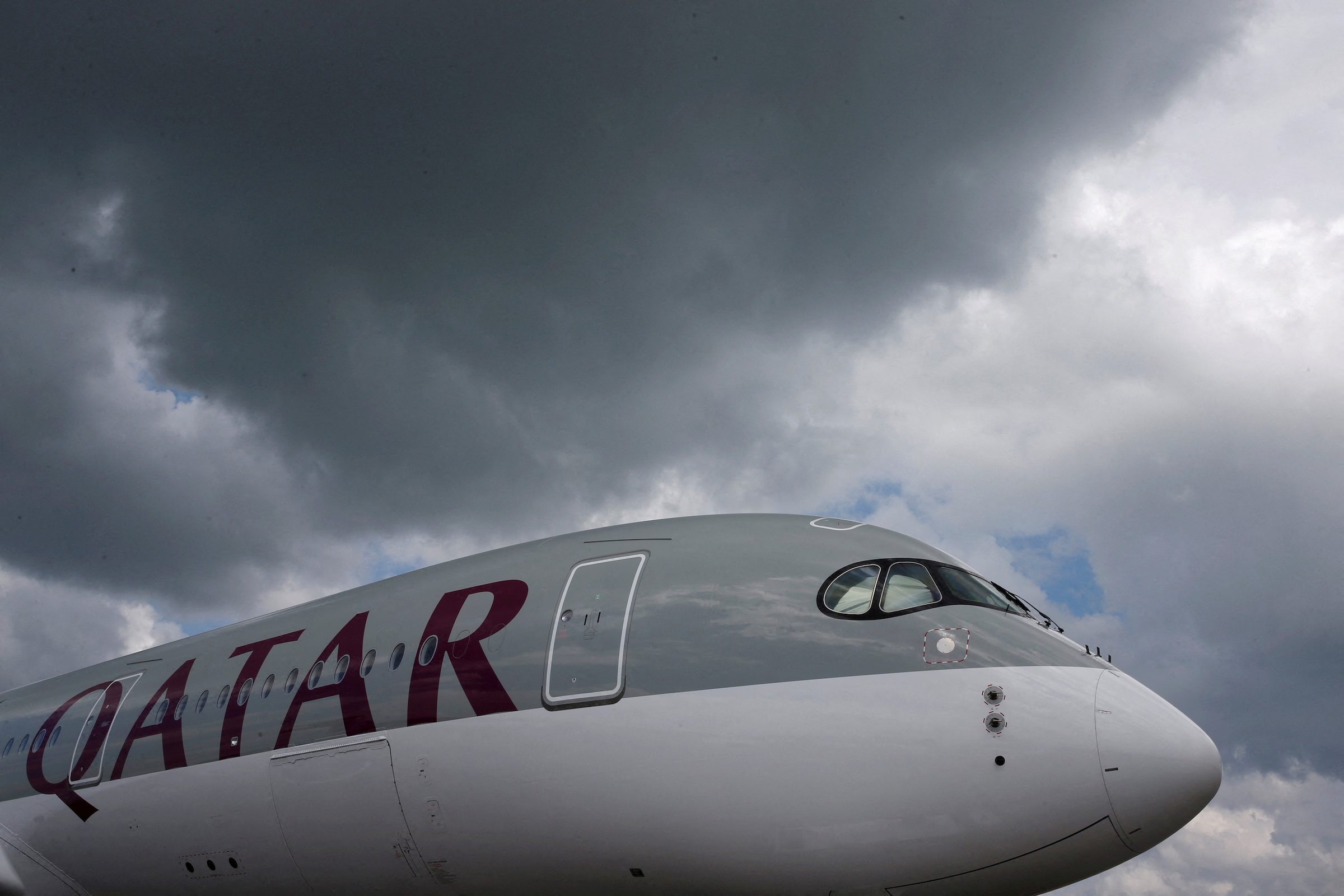 QATAR AIRWAYS. A Qatar Airways Airbus A350 XWB aircraft is displayed at the Singapore Airshow at Changi Exhibition Center, February 18, 2016.

Facebook Twitter Copy URL
Copied
'I fell asleep during the descent with 400 passengers on board.... You can't do anything. Your body is just screaming for rest,' a Qatar Airways pilot says

Pilots at Qatar Airways say the state-owned airline is undercounting their work hours and ignoring complaints of fatigue – a safety breach that hurts staff health and risks passenger lives.

The testimony demonstrates how worker abuse extends even to the Gulf nation’s high-skill industries, as Qatar Airways (QA) tries to minimize crew downtime.

“This is obviously a huge health and safety issue for the pilots themselves – and the people they’re flying,” said Isobel Archer of the Business and Human Rights Resource Centre.

The revelations come months before Qatar hosts its first World Cup with QA – as lead sponsor – hoping to be football’s carrier of choice. But pilots worry about the risks fans could run, saying ultra-long flights are now operated by short-staffed and exhausted crews, a pressure only made worse by the pandemic.

“I fell asleep during the descent with 400 passengers on board,” recalled Erik of one such 20-hour flight that he landed safely at the carrier’s Doha base.

“You can’t do anything. Your body is just screaming for rest. You feel the pain inside of your chest, and you’re unable to keep your eyes open,” the first officer told the Thomson Reuters Foundation, using a pseudonym so he could speak more freely.

Erik and six other flight crew members said the airline’s work hours were driving them into exhaustion and that managers were refusing to give them enough rest.

Many did not even file fatigue reports, fearing additional scrutiny from an airline that made thousands of staff redundant in the pandemic. Others said their reports were ignored or didn’t get rest to match the shift worked.

“We’re overworked and fatigued – but I never filled out a fatigue report because I don’t want to be in the spotlight,” said Erik.

Fatigue is common for commercial airline pilots, according to several studies, and companies usually operate Fatigue Risk Management (FRM) systems to ensure pilots don’t fly too many long-haul flights and get adequate rest at home base in between.

The Thomson Reuters Foundation asked Qatar Airways whether it had noted an increase in fatigue or related safety concerns, how it calculated work and rest hours, and whether it was taking steps to make staff more comfortable with reporting fatigue.

A spokesperson said the company was engaging with employees “to ensure that the rest time and rostering needs of our Flight Crew team are strictly balanced with the airline’s operational requirements, especially given the unique challenges facing the global commercial aviation sector.”

The airline said it was working to put “the most rigorous fatigue risk management program in place.”

The airline whittled down its destination list to 33 cities in 2020, but ramped it back up to more than 140 in 2021 as destinations reopened.

Pilots said that to manage those new flights with smaller crews, the airline was undercounting work hours to maximize operated flights while technically playing by the rules.

A flight crew member’s “inactive” period has no bearing on the down time he or she earns, according to a copy of the airline’s operations manual seen by the Thomson Reuters Foundation.

As a result, much of a long-haul flight may be deemed inactive, even if a pilot is on standby and backing up colleagues.

The manual states that for fatigue mitigation, “in-flight rest does not count as flight time,” straying from a standard calculation used by most civil aviation authorities.

“They count the hours in a different way. Not so long ago I was the ‘third pilot’ on duty – my duty was monitoring the pilots in the front, so I was 100% active,” Erik said.

“The flight time was one hour and 33 minutes, but the counted time was only three minutes. That’s what went towards my flying limit,” he said.

Two fellow first officers logged in-flight hours for the first two weeks of January that exceeded 115 hours, above the 28-day limit of 100 hours listed in the airline’s own manual.

The airline said it implemented “enhanced terms and conditions for hours worked,” but did not provide details.

One former crew member said work had left him so tired that when he was made redundant last year, “it came as a relief.”

“I thought, wow, I’m finally going to rest,” he added.

Qatar’s Civil Aviation Authority, which sets safety regulations within the country’s airspace, did not respond to requests for comment.

‘The bucket is full now’

“It causes stress. It feels like the bucket is full now, and if something happens work related, you feel it extra strong,” said a first officer, who said he had dozed off unintentionally at least 10 times, usually during descents.

“I mainly suffer from sleeping problems. Even when I’m tired, it’s sometimes hard to fall asleep, which creates even more fatigue. I feel so tired I start to feel sick or drunk,” he added.

A 2018 study on fatigue among commercial pilots in the Gulf found that more than two-thirds were “severely fatigued.”

Lead researcher Tareq Aljurf said severely fatigued pilots were more likely to be depressed. Nearly 30% of those surveyed were at risk of obstructive sleep apnea, in which someone intermittently stops breathing during sleep.

Qatar Airways said its crew were “fully supported with a range of mental health and well-being support services” but did not provide details.

A copy of a monthlong fatigue survey carried out by the airline’s Group Safety Office in 2020 and seen by the Thomson Reuters Foundation said 60% of pilots had reported that their fatigue and stress levels were affecting their sleep.

Despite the prevalence and risks of fatigue, several crew members said superiors had not taken their concerns seriously.

One first officer said he had filed eight fatigue reports after falling asleep on more than a dozen recent flights.

Three were rejected outright. One approved request got him 24 hours of rest in Doha – after which he was scheduled on a 23-hour turnaround flight to east Asia.

Two other crew members had all but one of their fatigue reports ignored.

Another two said they had refrained from filing fatigue reports because they did not want to risk losing their jobs.

The airline’s own 2020 fatigue survey said more than 90% of pilots surveyed had not filed a fatigue report in the last year, some due to “concerns about redundancies.” Less than half were “confident in submitting safety reports.”

The testimonies were particularly concerning ahead of November’s FIFA World Cup, when Qatar is set to host 1.2 million tourists.

“Qatar Airways is a sponsor and a service provider, so it’s set to make huge profits from this tournament. The fact that it seems to be operating at the expense of its employees’ health and safety is really troubling,” said Archer. – Rappler.com