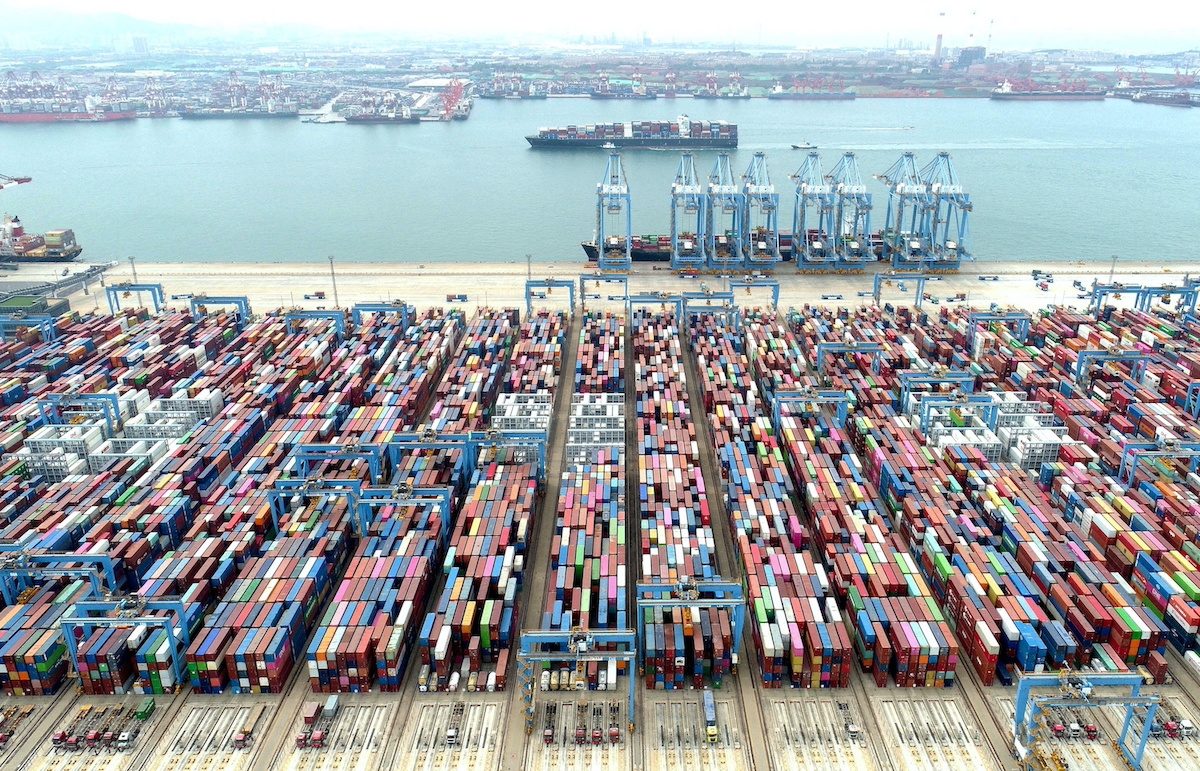 TRADE. An aerial view shows containers and cargo vessels at the Qingdao port in Shandong province, China, May 9, 2022.

VLADIVOSTOK, Russia – As Russian trade flows dry up in the West, TransContainer, the country’s largest freight container operator, aims to invest more than $300 million in the east as China leads a recovery in Asian imports and exports.

TransContainer plans to spend around 20 billion roubles ($330 million) this year on railcars, containers, and terminals to account for growing trade in eastern Russia, said first vice president Victor Markov, speaking to reporters on the sidelines of the Eastern Economic Forum in Vladivostok.

“Over nearly the last three months – June, July, August – we are seeing a recovery of export-import flows, and at the moment flows are more or less balanced,” Markov said, in comments cleared for publication on Wednesday, September 7.

“The last two months are showing convincing growth,” he said, pointing to August volumes of 94,000 TEU, a measure of container capacity, at land border crossings and Far Eastern ports, 50% more than the same month last year.

The shift in trading patterns follows a collapse in Russian imports soon after Moscow sent tens of thousands of troops into Ukraine on February 24, with a combination of sanctions and a mass corporate exodus crippling trade. Moscow calls its actions in Ukraine a “special military operation.”

But imports from China have since recovered, rising 22% year-on-year in July in dollar terms after four straight months of declines. Russia’s exports to China jumped 80% in May, 56% in June, and 49% in July compared with the same months of 2021.

In the first seven months of the year, exports at Russia’s northwestern ports fell 51% year-on-year and imports dropped 46%, Markov said.

But in the Far East, he said, imports were up 7.5% in that period and exports had risen 38% year-on-year. At the Zabaikalsk border crossing with China, imports were up 28%, and at border posts with Kazakhstan they grew by 141%.

“Imports are now the main driver of growth,” he said. “If we look at volumes for eight months, then import volumes have grown 12.5% on last year’s level.”

Exports are being partially redirected to countries in the Asia-Pacific region, he said.

TransContainer in March predicted that the exit of container shipping companies would result in a shortage of containers, expecting about 30% of containers on the Russian market to be withdrawn from circulation.

“We are seeing sharp growth in the provision of containers by Chinese owners, who are now replacing the containers of other companies, including those who stopped working in Russia,” Markov said.