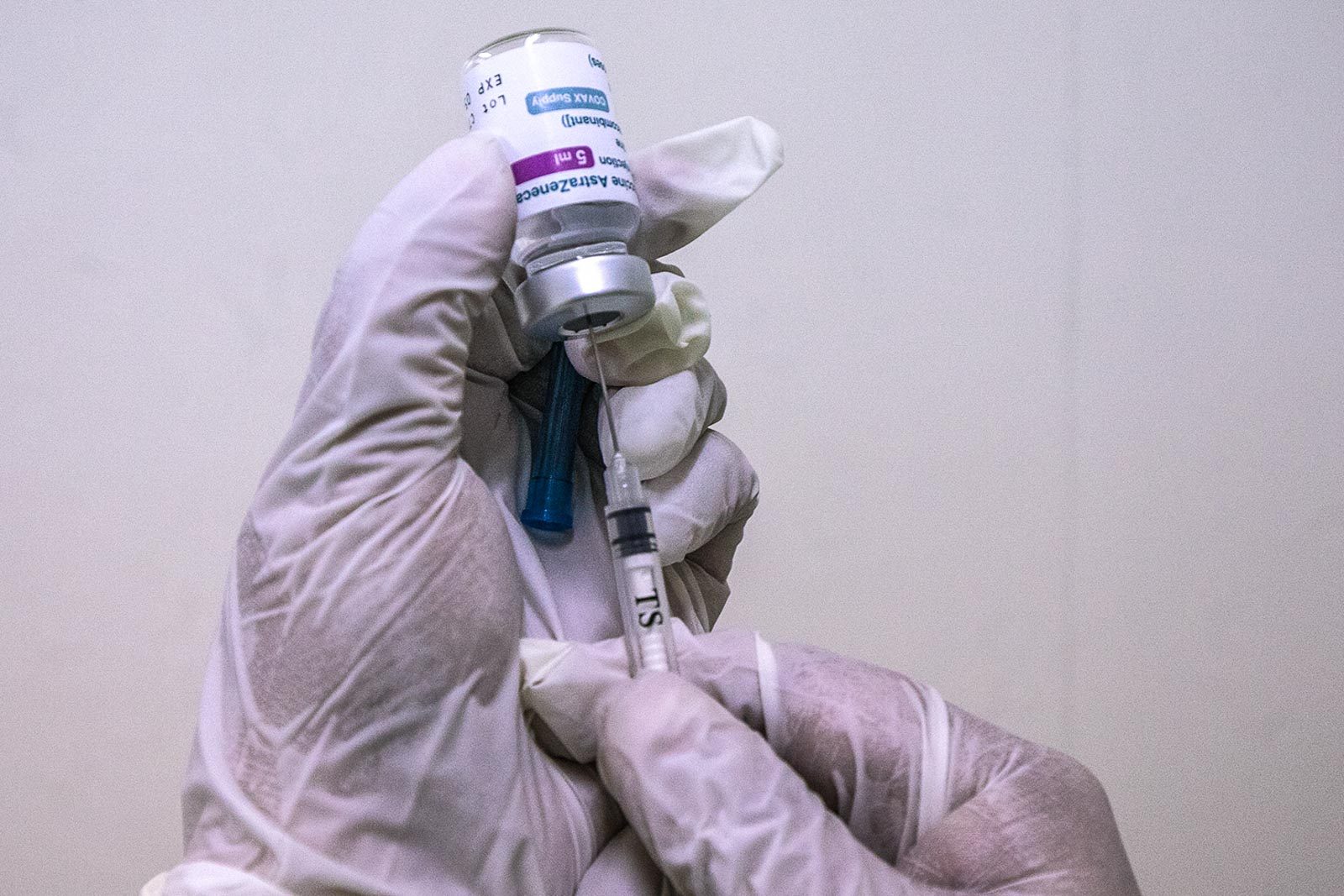 KEY TO RECOVERY. A dose of a COVID-19 vaccine.

The latest decision of the Duterte administration to impose stricter COVID-19 restrictions and force businesses to limit operations again is another blow to the private sector.

Business leaders, while always careful with their choice of words when commenting on the government’s response to the coronavirus pandemic, have repeatedly implied in virtual forums that they can no longer afford another lockdown.

They recognize that only a massive vaccination program will bring shoppers back to malls and revive the ailing economy.

A stalled vaccine rollout simply means more months of weak sales, further job losses, and a higher likelihood of businesses permanently closing. And with this delay set against the backdrop of surging infections day after day, businesses are just as anxious as consumers to get their hands on COVID-19 jabs.

In November 2020, Presidential Adviser for Entrepreneurship Joey Concepcion phoned the Philippines’ richest to ask them to help bring vaccines into the country, particularly 2.6 million doses from AstraZeneca, by the second quarter of 2021.

The companies agreed to “donate” half of their purchases for the government to be able to vaccinate health workers, before they could get their own supply.

A businessman, who requested anonymity, told Rappler recently that those who were convened by Concepcion understood that vaccine purchases had to go through the national government to ensure an equitable rollout.

They were made to understand that a tripartite agreement was needed and they couldn’t directly import vaccines.

The source also said they were given assurances that the Department of Health (DOH) would handle the end-to-end process, from the vaccines’ arrival to the vaccination of their employees.

But in a Zoom call on Wednesday, March 17, the private sector participants were told that they would have to team up with a service provider, particularly Zuellig, for their vaccine rollout.

This detail, the businessman said, implied that the DOH would have no role at all in their rollout.

“We were told to trust the DOH and we were assured of a plan. We negotiated for the vaccines last November, but until now we don’t have them because the DOH does not have a plan,” the businessman said.

“I’m sorry, but it’s a shit show. Cause of further delay. But ipit na eh (we have our backs against the wall), we can’t do anything but just follow,” he added.

In a statement on Saturday, March 20, Concepcion said the private sector participants “unanimously agreed” that Zuellig would be their partner in rolling out their procured AstraZeneca vaccines.

“The private sector agreed that it is best to have a logistics partner with a strong market coverage and equipped with the latest technology from a strong blockchain technology, latest cold chain facilities, and a strong end-to-end program, among others. To formalize this partnership, a tripartite agreement between the private sector, Zuellig, and the government will be finalized,” Concepcion said.

“The private sector is willing to pay for everything. In our town hall meeting last Thursday (March 18) with the AstraZeneca donors, all companies agreed to fund and pay for the logistics cost of the vaccine rollout,” the presidential adviser added.

The businessman we spoke to noted, however, that the tripartite agreement with a private partner for the rollout should have been arranged earlier on, so as not to surprise partners with more expenses.

The slow pace of the government’s vaccination program has prompted the private sector to urge the Duterte administration to let them have their own, more independent rollout.

Businesses should be allowed to import vaccines directly, according to the Philippine Chamber of Commerce and Industry (PCCI).

“We urge the government to allow the private sector to import vaccines without restrictions or conditions so we could move quickly and efficiently in vaccinating more people,” PCCI president Benedicto Yujuico said.

“We have to keep pace with our neighbors, which, except for Indonesia, have lower infection rates than us and yet are ahead of us – including Indonesia – in implementing the vaccination program. We cannot risk being left behind again and revert to being the ‘basket case’ of Asia,” Yujuico said.

However, Aileen Espina of the Healthcare Professionals Alliance Against COVID-19 warned that the private sector must work with the government in procuring vaccines, as the doses are only under emergency use authorization (EUA), so far.

“That’s the big difference. When it’s under EUA, it’s not the same as a certificate of product registration. The pharma company can only sell to government because it is specific and is covered by an indemnification fund,” Espina said.

She explained that the indemnification agreement is between countries, and basically states that the pharmaceutical company understands and absorbs the risk of potential side effects of the vaccine.

The private sector is also appealing for certain workers to be prioritized in the vaccination program. Philippine Retailers Association president and Wilcon chief operating officer Rosemarie Ong said in a recent media briefing that workers in the retail industry are frontliners, too.

“We have appealed to the IATF (Inter-Agency Task Force for the Management of Emerging Infectious Diseases) to consider us as frontliners and be part of the priority vaccination. We are in the least priority [group], yet…we are facing the public everyday,” Ong said in a forum organized by the Management Association of the Philippines.

“Retailers in the workers category and customers, they help the economy, increase consumer confidence, maintain the business operations,” she said.

Currently, economic frontliners like those working in the retail industry are at priority 4. Espina explained that healthcare workers, senior citizens, as well as those suffering from other diseases must be prioritized.

With the vaccine rollout stalled and adequate supply of doses uncertain, the business community is reaching their limits, bleeding billions of pesos.

Data from the Philippine Stock Exchange showed that most of the country’s largest companies saw a double-digit drop in earnings.

An executive of one of the country’s largest conglomerates told Rappler that morale is low in her unit.

“In my 27 years of working here, I have never laid off so many employees in a year. I’m quite hands-on, so I know the struggle of each person I had to call. And it pains me to tell them the sad news. I can’t even hug them and say goodbyes in person. It’s frustrating. The government needs to really push politics aside and do their jobs,” she said.

The executive noted that all management-level officials took as much as a 20% pay cut just to save as many jobs as possible, but it was still not enough.

“Our CEO didn’t want to tell it publicly, but he didn’t get his salary this year, just so we can save those jobs at the bottom,” she said.

When asked about company earnings, she admitted that friction among departments grew, as executives protect their own staff, and the finance department tries to improve the company’s books.

“Our financials will look even worse if we didn’t let go of workers.… Of course, there’s window dressing – let’s call it what it is – before we submit the documents to the regulators. Then of course we also have to consider our shareholders and the market’s reaction,” the executive said.

“We are also pressured to somehow improve the disappointing numbers, and that includes the painful decision of letting go of some employees, since the banks are also looking at that. As you know, we want to borrow more this year to improve the business. We assured the people we let go that we will get them again if they still don’t have jobs by then,” she added.

As the business environment continues to be battered by the virus, banks are bracing for impact.

Banks saw steep drops in earnings in 2020, as they anticipated that borrowers will be unable to pay off debt due to the crisis.

As of end-September 2020, the Bangko Sentral ng Pilipinas (BSP) said the country’s non-performing loan ratio was at 3.4%.

BSP Governor Benjamin Diokno, so far, is not alarmed by the steady rise in soured loans, and expects the ratio to increase to around 4.6% for the end of 2020.

The health of the financial system is a barometer of the economy’s health, as banks infuse capital into companies. A failure would send markets and the economy crashing.

For now, banks are taking a cautious stance by tightening lending standards and restructuring loans.

Wick Veloso, president and CEO of Philippine National Bank, said in a recent media briefing that meetings between the lender and the borrower are crucial in these trying times.