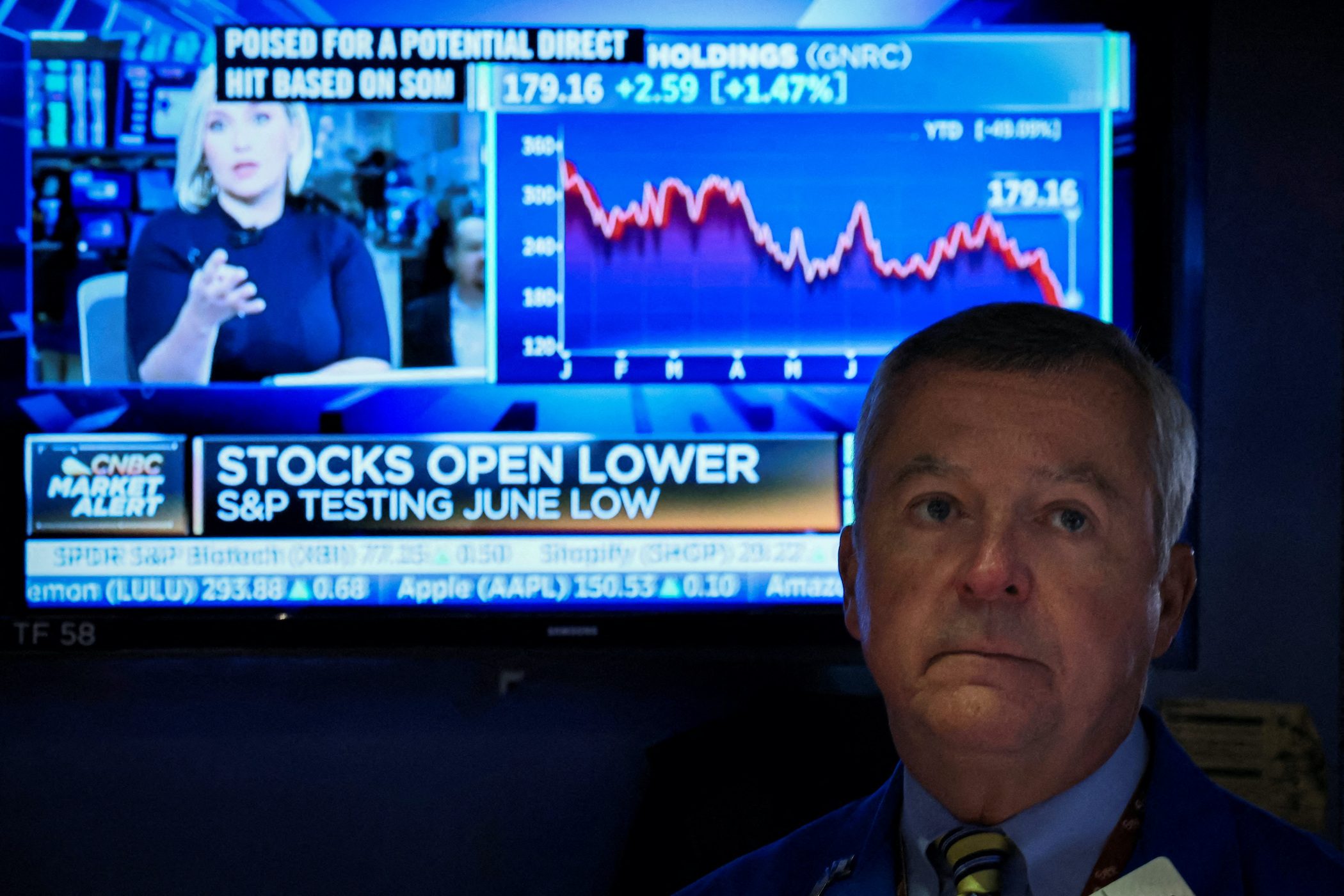 NYSE. A trader works on the floor of the New York Stock Exchange in New York City, September 26, 2022.

Facebook Twitter Copy URL
Copied
The Dow Jones Industrial Average and the S&P 500 both fall around 1%, while the Nasdaq Composite declines by about 0.6% on Monday, September 26

US stocks and oil prices declined in choppy trading on Monday, September 26, while the dollar and Treasury yields pushed higher, as Wall Street digested a raft of mixed macroeconomic news.

US Federal Reserve officials on Monday sloughed off rising volatility in global markets, from slumping US stocks to currency turbulence abroad, and said their priority remained controlling domestic inflation.

“I think everyone felt they were swimming in a tsunami of newsflow last week after one of the most incredible macro weeks in recent memory,” Deutsche Bank strategist Jim Reid wrote in a client note on Monday.

US stocks were mixed to start the day but soon turned negative, further giving up their summer gains. The Dow Jones Industrial Average and the S&P 500 both fell around 1%, while the Nasdaq Composite declined by about 0.6%.

Global equities also fell on concerns about high interest rates and their pressure on the financial system, although reaction to Italy’s election, where a right-wing alliance won a clear majority, was muted.

Wall Street’s so-called fear index, the VIX, was up around 6% on the day – approaching levels not seen since October 2020.

“Here we have investors hit from every which way,” Ken Mahoney, chief executive officer of Mahoney Asset Management in Montvale, New Jersey, said in an email.

“Including inflation not seen in four decades, the Federal Reserve overreacting because they missed the opportunity last year to ‘tap’ the brakes, instead they are slamming on the brakes, and with a stronger dollar it’s going to hurt earnings.”

Central to the market’s jitters in recent days has been the pound, which on Monday skidded to an all-time low against the dollar.

The Bank of England said on Monday it would not hesitate to change interest rates and was monitoring markets “very closely” after the pound plunged. Sterling last traded down about 1.4%.

In the US, Treasury yields also rose to new highs. Two-year Treasury yields, which tend to be more sensitive to interest rate changes, rose to a near 15-year high of 4.315%, and benchmark 10-year note yields jumped to 3.894%.

Gold prices hovered near a 2-1/2-year low on higher Treasury yields and a stronger dollar, while jitters over rising US interest rates dented appeal for non-yielding bullion.

“There has been an economic logic at play, as central banks raised rates to drive monetary policy into restrictive territory, get below trend growth for a while – a polite way of saying a recession – and then you get lower inflation,” said Samy Chaar, chief economist at Lombard Odier.

“The question is whether the financial world can go through that sequence. It feels like we are reaching the limit of that, things are starting to break, for example what we see with sterling.” – Rappler.com