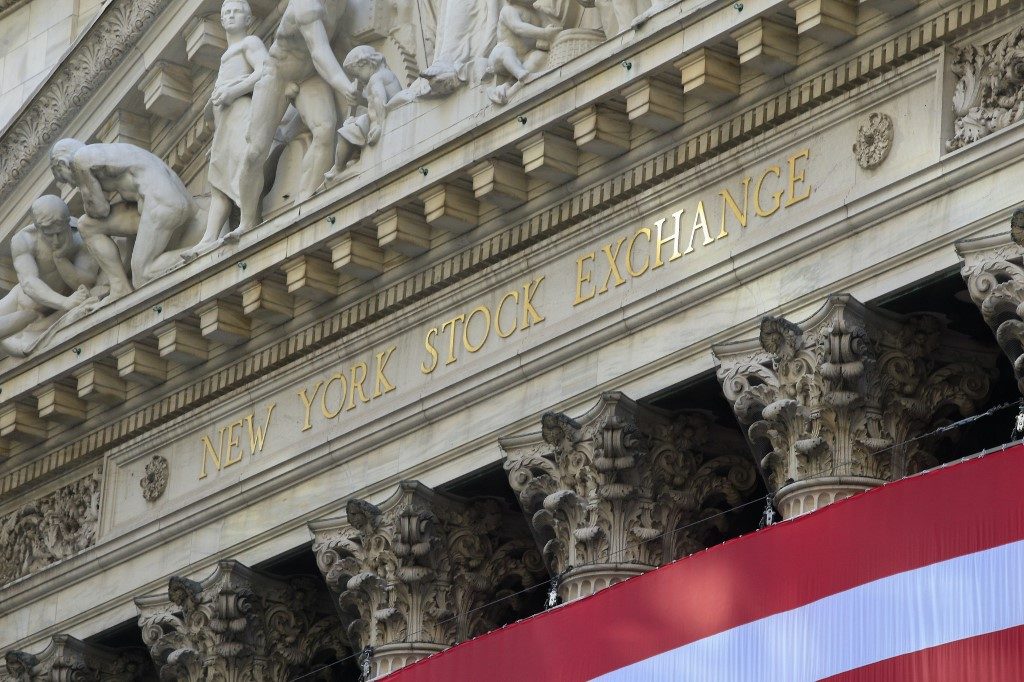 The exterior of the New York Stock Exchange is seen in New York on November 4, 2020. - Wall Street stocks were in rally mode Wednesday, shrugging off uncertainty over the still-unresolved presidential election and the likelihood of divided government in Washington.The Dow Jones Industrial Average was up 2.0 percent, or about 560 points, at 28,041.28 at around 1530 GMT, (Photo by Kena Betancur / AFP)

Facebook Twitter Copy URL
Copied
The Dow Jones index closes 0.2% lower on Friday, November 6, while the Nasdaq and S&P 500 are flat as counting of votes continues in the US election

US stocks from Monday to Thursday, November 2 to 5, posted the best 4-day streak since April, and Friday featured positive economic data for traders to peruse as unemployment dropped a full point to 6.9% in October, a bigger-than-expected fall.

The US economy regained 638,000 jobs last month, far more than analysts had been expecting, the Labor Department data showed, despite rising coronavirus cases and Congress’ failure to pass another spending package to aid the economy’s recovery.

But the Dow Jones index closed 0.2% lower, while the Nasdaq was flat for the day as was the S&P 500. But despite the lackluster Friday, this week was the best since April with a gain of 7.3% for the S&P.

In London, the FTSE 100 was almost unchanged but still added 6% for the blue chip index’s best week since June, a similar pattern to other major European bourses.

Oil fell, with the West Texas Intermediate and Brent Crude falling back nearly 4% after a volatile week as US President Donald Trump continued making unsubstantiated claims he is being cheated of an election victory.

Latest vote tallies showed Biden is on his way to the White House.

US media reported that the challenger had pulled ahead in the key states of Pennsylvania and Georgia. A victory in Pennsylvania alone would give Biden the presidency based on the Electoral College tally.

Despite some profit taking on Friday, stocks generally surged over the week as a Biden win became more likely, with traders betting on him paving the way for a bigger fiscal stimulus package compared to Trump, said Fawad Razaqzada, market analyst with ThinkMarkets.

While control of the upper chamber has yet to be determined, a “Republican-controlled Senate will make it unlikely that Trump’s corporate tax cuts will be rolled back,” he added.

Democrats and Republicans failed to reach a deal before the election, owing to disputes over how much to spend.

The prospect of further monetary easing measures from the Fed and a new stimulus have weighed on the dollar, boosting safe haven investment gold.

The rather less-traditional haven of Bitcoin meanwhile “blitzed through $15,000 for the first time since the beginning of 2018…as investors rode a momentum trade that has been building up a head of steam ever since PayPal announced it would let users buy, sell, and hold a variety of major cryptocurrencies,” noted Neil Wilson, chief market analyst at Markets.com.

Tokyo was the highlight in Asia as the Nikkei jumped 0.9% for its highest close in 29 years.