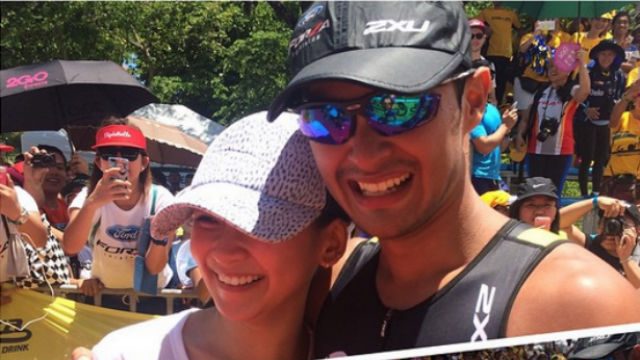 MANILA, Philippines – Some of our favorite local celebrities were at the Ironman 70.3 triathlon in Mactan island on August 1 to 2, to both compete and support their loved ones.

Piolo Pascual, Matteo Guidicelli and Victor Basa were among the 2,616 participants for the two-day race. There was also a race for kids 6 to 14 years old, called the Alaska Ironkids.

Here are some pictures from the race:

Actor and model Matteo Guidicelli was at the race with his brother Paolo and sister Giorgia. His brother competed in the Alaska Ironkids event.

Matteo Guidicelli already reached the 3rd U-Turn and is now on his way to the tunnel. #cobraironman703 @mateoguidicelli

His girlfriend, singer Sarah Geronimo, made it to the event to support him.

Piolo Pascual competed at the event. He was there with his son Inigo and sister Pats.

Cobra ironman 2015 here I come… Representing team Sunlife:) thanks to my training partners @iminigopascual @patspascual and the ever reliable pinarello bikes:) 🚴

last swim bike and run with the boys. time to rest and leave it all to the Lord. Thank you for the privilege of triathlon! #IM703cebu #teamgotta @gcremulla @markhernz

Kuya Kim’s kids, Emmanuelle and Eliana, were also at the race to support him, and it looks like they bumped into Matteo.

Model and actor Victor Basa was also at the event to compete.

Celeb Vic Basa now out for the bike ride. #cobraironman703

Good luck to the thousands doing the #cobraironman703 triathlon in Cebu tomorrow!!!