Aug 8, 2015 5:54 PM PHT
Rappler.com
Facebook Twitter Copy URL
Copied
Actress Maine Mendoza, one half of #AlDub, is fine after fainting during the wedding of Yaya Dub and Frankie Arinolli during 'Eat Bulaga' 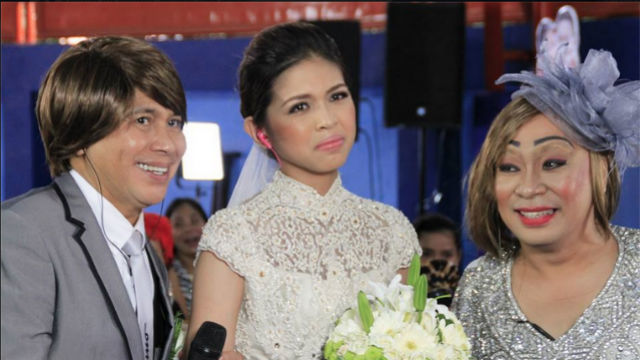 MANILA, Philippines – Yaya Dub was supposed to get married to the character Frankie Arinolli on Eat Bulaga‘s segment, Juan for All, All for Juan on August 8, but actress Maine Mendoza, who plays Yaya on the show, fainted during the episode and had to be taken to the hospital. (READ: #AlDub: The fun tandem of Alden Richards and ‘Yaya Dub’)

Although it appeared to be part of the scene, the actress really fainted, was rushed off set on a stretcher, and brought to the hospital. The show continued without her.

Maine tweeted later on, explaining that she was fine and that the cause for her fainting was fatigue. “As I posted earlier, I’m feeling under the weather since this morning. We’re too busy preparing for the segment that I forgot to take my meds. That’s probably the reason why I passed out during our cue. None of it was scripted. I was immediately rushed to the hospital… But nothing to worry [about], they said it’s all because of over fatigue,” she wrote.

Maine tweeted this morning that she wasn’t feeling well.