She may as well be echoing the creators of what is now a four-movie series about vampires and werewolves offing each other using fangs, claws and guns. That is, emotional depth and character development are not what the filmmakers—led by original director and Beckinsale hubby Len Wiseman—are “good” at.

Instead, they prefer to churn out the derivative, digital freak show that this mundane series has been since the first installment’s big-screen debut in 2003. But fan boys can’t be bothered by critical rants, pleased as punch as they have been with this video game-like hybrid of The Matrix, An American Werewolf in London and virtually any Gameboy-era vampire flick.

So heavy is the technological ingredient to the Underworld movies that a 3D iteration, via this Awakening edition, was almost inevitable. But presumably because 3D exacerbates the production budget, not only does Underworld Awakening clock in at a cost-saving 89 minutes, its first 2 to 3 minutes are a slapdash montage of scenes from the earlier installments!

Even if that rewind served to accompany a refresher narrated by Selene/Beckinsale, the visual medley suggests nothing short of storytelling laziness. (Not even the actress’ own icy English accent can mask the bitter aftertaste of us being shortchanged.) 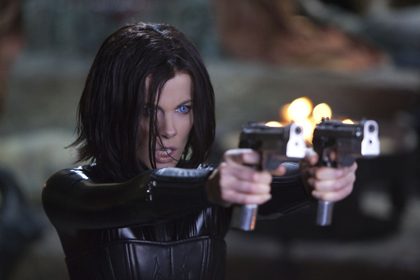 Usually sporting a tight rubber suit that’s part-Catwoman, part-Trinity (sometimes cloaked by a longcoat that’s part-Neo), the petite, fragile-faced Selene faces off anew with “Lycans,” a.k.a. lycanthropes, a.k.a. werewolves. Except now, humans have been added into the conflict stew. Yet that angle is eventually disposed of in favor of the old vampeys-against-wolfeys face-off that has made this series a million-dollar cash cow. There’s even (brief spoiler ahead) a maternal subplot thrown in, yet Beckinsale, a considerable enough actress, is hardly given time for a dramatic, “You’re my child?” epiphany.

Underworld Awakening is not 100% awful, though. To my eyes, there were at least 2, fleeting Awakening moments that made the sit-through rewarding.

First, there’s the shot of a buck-naked Selene (but with her privates kept private by icy fog), recovering from forced hibernation inside a lab; spotting her old costume, she starts to get dressed but, instead of her corset, opts to get her boots first! More ridiculous instances like that could have at least made Awakening a campy delight the way, say, John Carpenter’s Vampires was; but alas, no such luck.

The second is the lone, worth-it 3D moment, featuring a mid-traffic chase with three of the lead characters in a van and three big-ass Lycans on their tail. When one of the 3 big bad wolves breaks into the van’s windshield, the execution is real-time swift and out-of-nowhere ingenious that real debris appeared to be headed the audience’s way.

I could add that this whole scenario of bloodsucking vampires and hulking, horrifying werewolves does touch a playful nerve in anyone, teens especially, who long to escape real-life, real-me humdrum. And oh, what a livelier spectacle it would be if the players in the ongoing impeachment trial were actually vampires and werewolves—and it would all be over bloody sooner!

Seriously, all of that aside, Underworld Awakening is disheartening.

Despite its attempts at plot, the story hardly matters in the teeth of the mostly computer-generated mayhem, winding up too shallow to be an even mildly transporting experience. Despite Beckinsale’s straight-faced stance through this and the rest of this series (you’re better than this, Kate), her Selene is often in danger yet hardly vulnerable; you’d rather just stare at her than root for her.

All told, tickets to movies like Underworld Awakening, half-baked productions where narrative efficiency is sacrificed at the altar of slam-bang fakery, should be half-priced, but who ever said life was fair?

Even this movie’s use of 3D technology is mostly negligible. Not only are a few scenes viewable even without the red-and-blue glasses on, the technology apparently does not work well in the dark tones this flick favors (unlike in the upcoming The Amazing Spider-Man, the rich, bright red-heavy trailer of which preceded the lackluster main feature).

And as if the preceding 99% of Awakening was not sloppy enough, there’s the forced cliffhanger ending that is not so much a satisfying anticipation-builder as it is a cheap excuse for directors Mårlind and Stein (apparently too cool for first names), co-writer Wiseman and company to wring out a potential fifth Underworld flick. I suggest this title for that: Underworld Once More Without Feelings. – Rappler.com