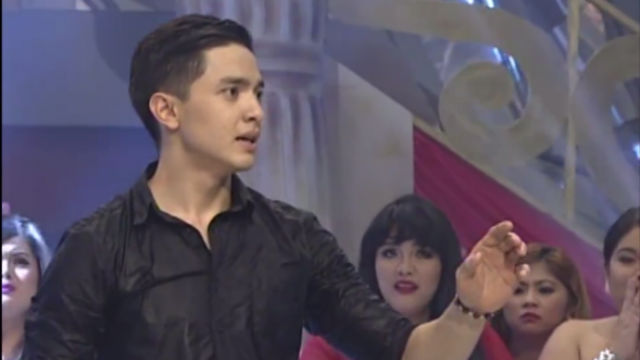 MANILA, Philippines – As viewers of Eat Bulaga continue to monitor the tandem of Alden Richards and Maine Mendoza aka Yaya Dub (their tandem is also known as AlDub), social media was once again abuzz after it was revealed that there was a possibility that the two of them would finally meet on Wednesday, August 12.  (READ: #AlDub: The fun tandem of Alden Richards and ‘Yaya Dub’)

Unfortunately, this was not the case. Here’s what went down:

After Maine Mendoza’s fainting episode during her failed wedding to Frankie Arinoli (Jose Manalo) last Saturday, August 8, Yaya Dub appeared on the show again on Tuesday, August 11. During the episode, it was revealed that there was a possibility of Yaya Dub and Alden finally meeting each other, as Yaya Dub was scheduled to perform at the studio. (#AlDub, the story so far: Alden and Yaya Dub’s forbidden love)

On Wednesday, it seemed there was hope, as Yaya Dub prepared for her performance in the show. Lola Nidora, who is against the couple being together, rushed to Broadway on a motorcycle and said that she would only allow Alden to see Yaya Dub if he filled a big aquarium with water. Alden agreed to do the task.

As Alden did the task, Yaya Dub, dressed in a blue gown, appeared onstage. Alden rushed to meet Yaya Dub but Lola Nidora (dressed in a witch costume) threatened Yaya: if she does not run away, she will turn into a big pumpkin. Left with no choice, Yaya Dub immediately left after her performance.

When Alden arrived, Yaya was not onstage anymore. Instead, he found a glass slipper on the stage and saw Yaya Dub from afar. He chased her, but Yaya got away by hanging onto a jeep. Alden was left devastated.

So close yet so far.

Some fans were also very excited because it was reported that Alden approached Maine’s parents, who were in the audience, and took a photo with them.

Will Alden ever meet Yaya Dub? Will the wedding between Yaya Dub and Frankie push through? Will Alden ever find the owner of the glass slipper he saw?

#‎AlDubMaybeThisTime‬ trended on Wednesday due to the possible meeting. The question is when will they finally meet? Let us know your thoughts about the #AlDub tandem in the comments section. – Rappler.com