Meet ‘Pastillas Girl,’ on a quest to find love 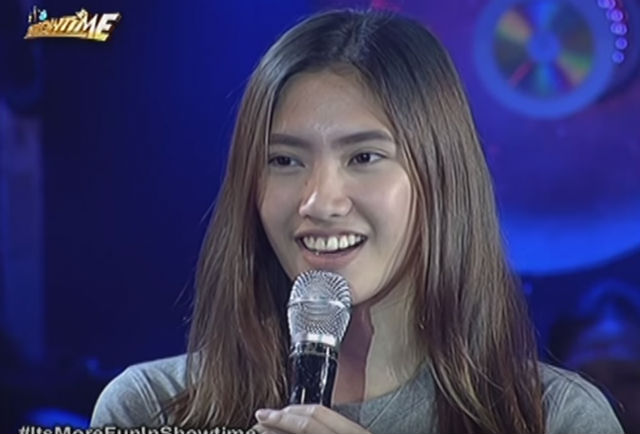 MANILA, Philippines – Just how do you make pastillas del leche (soft milk candy)? Simple. All you need is some condensed milk, powdered milk, sugar, and the bitterness of being cheated on by your partner.

This is exactly what Angelica Jane Yap, known as Pastillas Girl, needed to make her sweet pastillas in her viral video. Angelica’s video gathered thousands of likes when it was posted on Tee Radio’s Facebook page.

Another video of Angelica was posted, this time narrating how to make yema or sweet custard candy. The video gathered hundreds of thousands of views.

On It’s Showtime last September 11, Angelica shared why exactly she made the videos. According to her, she was surprised when her ex-boyfriend got together with one of her friends, with whom she was sharing her relationship problems.

“After nung nangyari, hindi ako nagparinig kahit kaunti. Tinulungan ko ang sarili ko mag-move on,” she said. (After what happened, I never ever said anything, not even a word. I helped myself to move on from the pain.)

Angelica also shared that both her ex-boyfriend and friend blocked her on Facebook after she confronted her friend about it.

Host Vice Ganda praised Angelica, saying that the fact that she was smiling after being cheated on proved that she was okay.

(You know, the fact that you are laughing now, that’s what annoys the people who hurt you, right? The moment they see that you are smiling, laughing again, that what makes them angry. Why is she laughing? Why is she okay?)

“Kaya lagi mong ipakita na okay ka, na tumatawa ka dahil iyon ang mga pangtalo sa mga taong nanakit sa iyo,” Vice added. (That’s why, always show them that you are okay, that you are laughing because that’s what you can use against those who hurt you.)

UPDATE: According to people online, Angelica is not the first to use the famous pastillas recipe. Miel Francisco posted this on her Facebook:

“Dun sa mga umangkin ng recipe ng pastillas ko. Inyong inyo na sige sanay naman mawalan… 🙁 hahahahahaha.” (For those who took my pastillas recipe, you can have it. I’m used to having nothing anyway.)

Angelica issued an apology on her Facebook for not crediting Miel.

“Sorry if hindi ko nalagyan ng credits. (i’m sorry for not giving proper credit.) I don’t want issues po. Never ko naman na-claim na akin yung recipe ate. (I never claimed the recipe was mine.) I even shared the photo but it wasn’t from your account kasi madami ding nagshare. Sorry for this. Guys it was all from her. Napagkatuwaan lang gawan ng video.  (It was just fun to make a video out of it.) Give all the credits to her. It is a very nice recipe which made all this viral.”

On Twitter, one Jess Verano Senido posted some sweet messages for Angelica. He was on his way to ABS-CBN on Tuesday, September 15, where Angelica was.

According to a report from ABS-CBN, Jess is from Bacolod and was invited by Vice to come to the studio.

Someday…Toper will be gone. It will be JESS you and ME #ShowtimePastillas

I JESS can't get enough of you, Ms. pastillas. #ShowtimePastillas

Jess was able to make it to the show and meet Angelica.

But looks like Jess has some competition: another guy name Topher is also vying for Angelica’s heart.

Feedback from netizens has been positive, with some of them saying that they like the unscripted nature of the show. Some of them even started calling it a Twitterserye because Jess and Topher started off getting Angelica’s attention through Twitter.

Ang maganda nito, may third party. So how will you find Forever if Destiny will come? #Twitterserye @itsShowtimena #ShowtimeUnliGV

Given the nature of events, some are saying that the Jesstillas tandem is the show’s answer to Eat Bulaga‘s AlDub – Maine Mendoza and Alden Richards. (#AlDub: The fun tandem of Alden Richards and ‘Yaya Dub’)

While it remains to be seen where the show is going with Pastillas Girl and her quest to find love, there is no doubt that there is now healthy competition between the two shows and tandems.

What do you think of Pastillas Girl’s quest to find love? Let us know in the comments below! – Rappler.com