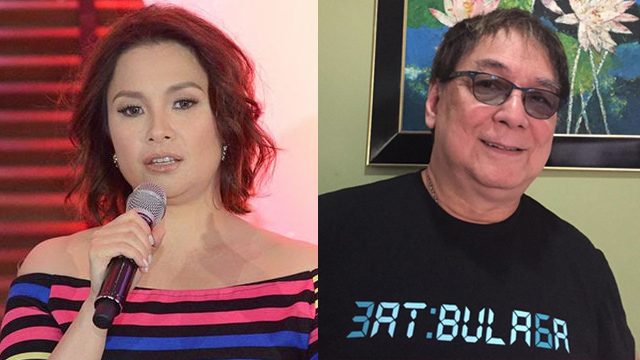 Facebook Twitter Copy URL
Copied
‘I'll take this to mean that you're at least giving me the benefit of the doubt. For that, thank you very much,’ Lea tweets Joey

@AngPoetNyo Hi, Tito Joey, I'll take this to mean that you're at least giving me the benefit of the doubt. For that, thank you very much.

Joey also posted this after Lea answered him.

@AngPoetNyo Same to you!!! My best to everyone in EB Land!!!

Last September 26, Lea’s tweet about being shallow drew strong reactions from social media, with many accusing her of hitting the AlDub tandem composed of Alden Richards and maine “Yaya Dub” Mendoza. At the time, AlDub’s most recent episode, featuring a visit from Alden to Lola Nidora’s mansion to court Yaya, was the most talked about topic on Twitter. The topic has generated over 25 million tweets.

After Lea clarified her tweet, Joey took to Twitter to address the issue. In the end, he said it would be better to enjoy the show.

The AlDub tandem was born out of Eat Bulaga’s “Juan For All, All For Juan” segment, where the characters Alden and Yaya Dub are in love, but kept apart by Yaya’s boss, Lola Nidora. Their tandem has become a big hit, with recent episodes seeing Yaya Dub and Alden going out on their first date and having their first photos together. – Rappler.com