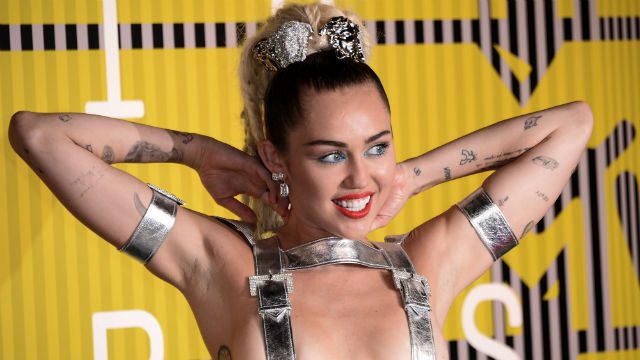 Facebook Twitter Copy URL
Copied
Miley plans to have herself, The Flaming Lips, and the audience naked at the concert, while milk is spewed everywhere

NEW YORK, USA – Miley Cyrus, no stranger to shock value, is planning an even more sensational event – a concert where she, her band and the audience are all naked.

News of the concert-in-the-buff came from The Flaming Lips, the psychedelic alternative rock band that in recent months has begun a partnership with the Disney star turned twerker.

Cyrus “is planning a show where her, the band (us) and the audience are all COMPLETELY naked with milk (well white stuff that looks like milk) …being spewed everywhere,” Flaming Lips frontman Wayne Coyne wrote on Instagram on Tuesday, October 14.

He did not reveal further details – or ticket information – but said the naked show would be filmed for a music video.

Laws on public nudity vary widely around the world, but Cyrus and The Flaming Lips presumably would work with a private venue.

The 22-year-old Cyrus, who describes herself as pansexual and has not been shy about sexually explicit performances, in August released a surprise album, Miley Cyrus & Her Dead Petz, in a collaboration with The Flaming Lips.

While the 54-year-old Coyne and his bandmates are less known for sex appeal, The Flaming Lips have been known since the 1990s for energetic and extravagant concerts in which the singer surfs through the crowd from inside a balloon. – Rappler.com