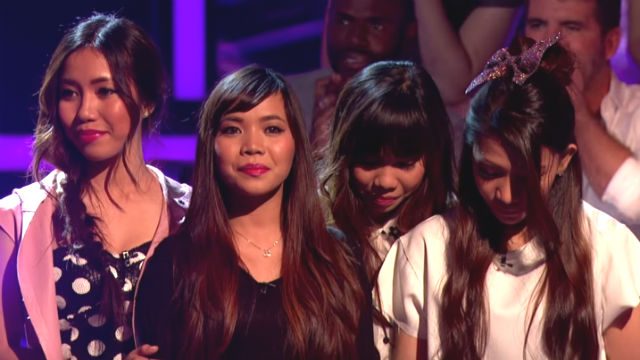 MANILA, Philippines – Filipino group 4th Impact, formerly known as 4th Power, made to the top 12 of the X Factor UK, Saturday, October 24 after being chosen as the first contestants for the group category.

Almira, Celena, Mylene, and Irene looked on in shock and delight as their name was called by mentor Cheryl Fernandez-Versini.

Early this month, 4th Impact traveled with Cheryl to Rome, where they performend Rihanna’s “Love the Way You Lie,” in front of guest judge Jess Glynne.

The sisters made quite an impact last month when they performed endition of Jessie J, Ariana Grande, and Nicki Minaj’s “Bang Bang” during their audition. Simon Cowell, one of the judges, told them: “In terms of first auditions, this is probably the best I’ve ever seen.” (READ: Pinoy acts impress ‘X Factor UK’ judges)

The sisters have already experienced some criticism for already being seasoned performers prior to auditioning for the show. They’ve performed on ABS-CBN’s It’s Showtime as the Cercado/Gollayan Sisters and as MICA on the Korean talent competition Superstar K6.

The girls responded to the criticism on a British morning show, saying they’re still “chasing their dreams.” Meanwhile, a spokesperson for the show told The Mirror that “there are no rules preventing anyone who has appeared on other shows from applying for The X Factor.”

4th Impact is the last remaining Filipino talent on the show after Neneth Lyons failed to make it to the 6 chair challenge last October 19. – Rappler.com