MANILA, Philippines – Stylist Liz Uy filed complaints against Michael Sy Lim of the blog Fashion Pulis Monday, November 9. These include 6 counts of online libel and one of grave slander.

At the Office of the City Prosecutor of Makati, Uy, her lawyer Lorna Kapunan, and two witnesses to the slander count – actress Isabelle Daza and Preview executive editor Isha Andaya – spoke to the press about the details of the complaints filed by Uy. (READ: Stylist Liz Uy to file libel, slander complaints against Michael Lim of ‘Fashion Pulis’)

Here are the details and what they said about the case:

1. The 6 counts of libel are referring to 3 of Lim’s blog posts and 3 tweets on Lim’s account.

One blog post says that Uy “recycled” a Francis Libiran gown worn by Maine Mendoza of Eat Bulaga. The gown was modeled by actress Kim Chiu for Libiran in the past. 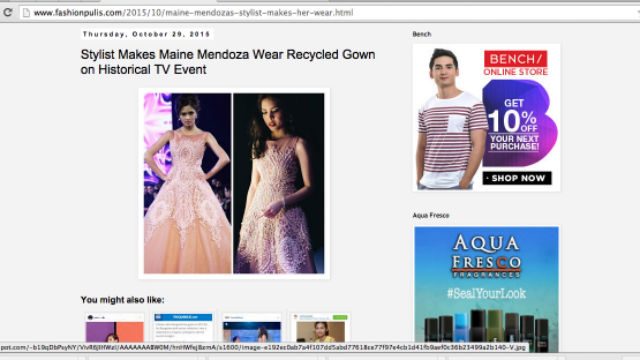 The other post says that Uy made Mendoza wear a jacket for her Preview magazine cover shoot, and the design of that jacket was previously worn by Uy. The 3rd says that although Libiran said that Mendoza’s gown was from his 2015 Spring/Summer collection, a picture of Chiu in the gown shows otherwise. Lim’s tweets have since been deleted, but according to Uy’s complaint, these are his tweets and their corresponding dates:

2. As for the complaint on grave slander, Daza and Andaya attested to overhearing Lim at at the Manila Peninsula saying, “[K]ung ikaw yung stylist, ipapasuot mo ba yung jacket that you wore two weeks ago?! Di ba?! Why did she make Maine wear the jacket she already posted?!”

(If you were the stylist, would you have someone wear a jacket that you wore two weeks ago? Right? Why did she make Maine wear the jacket she already posted?) 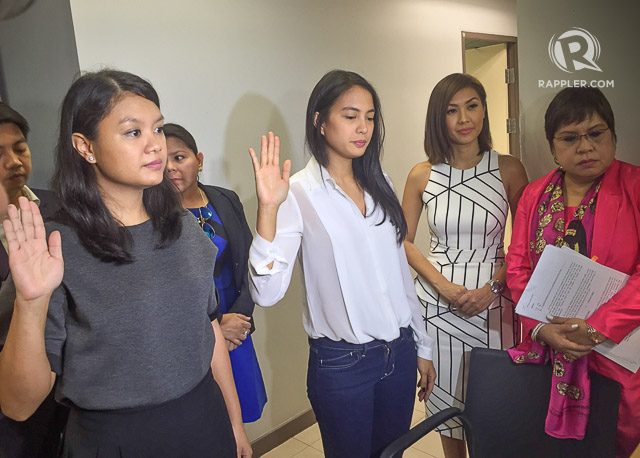 “And I know this is verbatim kasi habang sinasabi niya, tinetext ko si Liz, ‘Liz ano ‘tong issue (Liz, what is this issue)?'” said Daza after telling the press what she heard. “And Isha was also there, they heard it, and there were other witnesses and we clearly know that it was to kind of slander Liz, it was done in a malicious way. It wasn’t an opinion, it was done to put her career and kind of try to bring her down.”

Daza also said that she and Andaya were at the Manila Peninsula for an event for Vicki Belo.

3. Fancis Libiran has since issued a statement regarding his gown.

He said that Chiu modeled the gown at the “Francis Libiran Metrowear Icon” fashion show in 2013, but it “has not been worn at any other event by any other celebrity.”

We are so glad, honored and grateful that Maine Mendoza and her official stylists, Stylized Studio, Inc., chose a beautiful Francis Libiran dress from our Spring/Summer 2015 . Maine Mendoza's gown at Eat Bulaga's Tamang Panahon concert for a cause was bought and paid for by Eat Bulaga Production. The gown was first previewed during the “Francis Libiran Metrowear Icon” fashion show held at the Edsa Shangri-la in 2013 where we launched an entire 100-piece collection, including the Pink Series. Our good friend Miss Kim Chiu was generous enough to model this gown for the said fashion show. This gown has not been worn at any other event by any other celebrity.

A written statement given to the press says that the gown was not “recycled” and echoed Libiran’s statement that it was never sold to anyone or used at any other event: “It is common in the fashion industry for designers to present their upcoming creations in fashion shows. Francis Libiran showcased said gown along with his other creations in a fashion show and his model for said gown was Kim Chiu. Kim did not buy the gown nor did she use it for any event.”

4. According to the written statement given to the press, Liz Uy was not the stylist for the shoot on September 30. She was at a People Asia event at Marriott Hotel at the time of the shoot.

The statement also says that Uy was sent the jacket by Store Specialists Incorporated, for whom she is a social media influencer, on October 1.

According to  Stylebible.ph, Preview’s creative director Vince Uy picked the clothes for the September 30 shoot from Gucci’s Cruise 2016 collection and they were flown in exclusively. Because of Preview’s policy on the confidentiality of cover shoots, “Liz could not have known that Maine had worn the same piece in one of the six layouts she had for the shoot.”

5. According to Uy’s lawyer, Lorna Kapunan, if Lim is found guilty, he faces 6 to 12 years of imprisonment per count.

“Compared to our regular libel laws the penalty for cybercrime libel is one degree higher,” she said. (Kapunan is also a senatorial candidate under Aksyon Demokratiko and is running under the ticket of Senator Grace Poe and Chiz Escudero.)

6. Uy also filed a complaint for civil damages in the amount of P11 million, but Kapunan said they are willing to settle.

“Ang kaso ay maganda lang para sa lawyers noh (the case is just good for the lawyers right), pero (but) in terms of settlement, why not? Because we’re not here to make money, she’s (Liz Uy) not here to make money, she’s here to clear her name. And I think this should be a lesson, not only to Michael, but to all those in the industry – not only in the fashion industry, but those who he has maligned.”

7. According to Kapunan, Lim’s posts and tweets damaged Uy’s reputation as a stylist.

Answering why it took them two weeks to file the complaint – the event that Mendoza wore the gown in question happened on October 24 – Kapunan said that it’s because “reputation is priceless.”

“I think Michael, who appears to be a professor in marketing, should know that you destroy a brand, you destroy an image, you destroy a reputation by maliciously attributing false allegations. Kasi ang (because the) freedom of the press, lalo na sa (especially in) cyberspace ay (is) mahirap i-control,” added Kapunan.

“Because as soon as you put something on a webpage or on Twitter or Instagram, you lose control, and therefore you are responsible for all of those who read you and who tweet you, and who repeat the malicious statements you make.”

Lim is a marketing professor at De La Salle University.

“I think this was maliciously done kasi precisely, sumakay sa reputasyon ng napakadaming (he rode on the reputation of the many) tweets in the last [AlDub] affair, we know that there were 41 million tweets [for that event],” added Kapunan later. “Sinakay niya (He rode it) in the guise of defending Yaya Dub, in the guise of defending the icons of that show. Sumakay siya sa (he rode the) issue hoping to get all the followers of Yaya Dub. I mean, you don’t build a reputation by destroying others’ reputation.”

8. Uy said she is filing these complaints because she is “fighting for her right.”

(Because he named me but he didn’t check his facts first, right? Because I know that’s his job, to blog, but it’s also his job to check first the information, to fact-check before he writes.)

Uy added later that she does think she is a victim of cyberbullying. “Every day I get hatemail and hate messages from social media because of what happened,” said Uy.

9. When asked for her message to Michael, Kapunan responded, “Get a good lawyer.”

Liz, on the other hand, replied, “I don’t have a message for him.” Later, she told the reporters she did have a message, saying, “Since we’re talking about online and social media, so it’s: hashtag “Stop the hate.”

Uy posted the following statement on Twitter after she filed the complaints:

As a former fashion editor, I was trained to uphold FAIR and RESPONSIBLE journalism at all times.When I transitioned into celebrity styling

and accidentally became a public figure myself,I learned to embrace that being scrutinized by the public is part and parcel of that position

However, sometimes things can be taken too far and place me in a bad light, discrediting my hard work, my team, and my styling company.

I am not the first victim—many others have chosen to remain silent. I could have done the same, but in the end, I realized that…

if we always let him get away with cyber bullying, then he will continue to propagate untruthful claims and malicious gossip on his blog…

… and social media accounts. Thank you to everyone who has expressed their support. I am fighting this battle not just for myself…

…but for every single person—celebrity and otherwise—who has been bashed relentlessly and unfairly.

10. On November 9, Lim issued a statement regarding the complaints on his blog and on his Twitter account.