Facebook Twitter Copy URL
Copied
16 years after its release, 'God Gave Me You' is enjoying newfound popularity via hit love team #AlDub. How did singer Bryan White find out about the 'kalyeserye'? Read on

MANILA, Philippines – Country star Bryan White is still amazed to this day that his song “God Gave Me You” led him to Manila. The singer, who is scheduled to perform at the Smart Araneta Coliseum Tuesday night, December 1 said, that if there is one thing he learned, it is never to underestimate the power of music. (IN PHOTOS: ‘God Gave Me You’ singer Bryan White arrives in Manila)

“The one thing that was reinforced for me is to never underestimate the impact of music and what it can do. Many years ago I worked hard in making that the best it can be, and it just goes to show that it’s in God’s timing. It was a hit in the United States but nothing compared to here now,” Bryan told reporters during a round table interview, Saturday, November 28. “You just have to let God do what he does. So here we are 16 years later. It’s amazing how music travels and it has own timing. And the thing for me that’s beautiful about the success of this all is because of the fans, and it’s all because they connected with it, and they’re the ones who made it a success.

“It’s an amazing phenomenon and I’m glad to be part of it,” he added.

Bryan recalled the day when he found out that “God Gave Me You” was a big hit in the Philippines. According to him, he was already aware that people were talking about the song for many years. But it was not until he went online on Twitter last September, that he saw exactly how popular it had become.

“It was September of this year, I have stepped away from Twitter for a while,  just to sort of take a break, because I felt I become so consumed with it because I’m such a social media guy and I took a break from it. And I got this new IPhone and I got these new apps and then I was playing with my phone one day because I was excited and it was new.

“So one day I got on Twitter and check it out and I just saw all of this activity…yeah and I didn’t really know quite what was going on.  So I started talking to people and DMing (direct messaging) fans and asking ‘hey what’s up’ with AlDub and they were like ‘oh it’s the national anthem. Really? You got to be kidding.’ And they started saying AlDub and things like that,” he said.

“So I tweeted what is AlDub and some of them started explaining the TV show and it was a love team. So I started to learn about and got on YouTube and learning about Eat Bulaga, the show and the impact [of it].”

Overwhelmed with all the love he’s getting because of the song, Bryan said he went to his studio after celebrating his wife’s birthday to record and post a video for the fans.

“I went downstairs [to the studio] and turn on the phone. I felt so overwhelmed it was such a unique experience that I had to completely address it and say thank you. 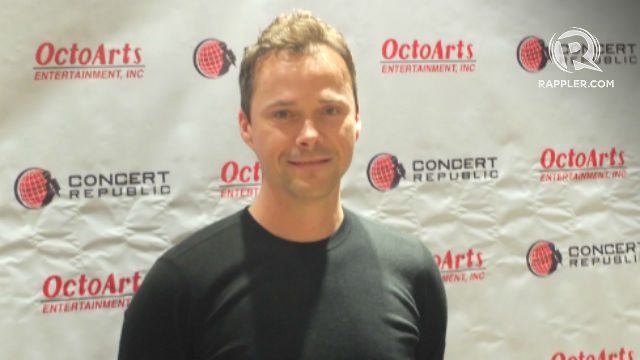 As for the success of AlDub aka Alden Richards and Maine “Yaya Dub” Mendoza, Bryan said he was very honored to be part of a love team that made history. During his guesting on Eat Bulaga last Saturday, Bryan performed the song and was happy to learn that he became part of the storyline. (#AlDub sets new record: #AlDubEBTamangPanahon pulls in 41 million tweets) “I’m still learning about the whole thing so I think they look to me like a match made in heaven. To me they look like they belong to each other; first of all, for the record that how I feel. So finding out later that I was injected in the whole scenario, I’m okay with being the serenading guy. I’m honored to be part of it.” he said.

Aside from being a singer, Bryan has also collaborated with many country stars such as LeAnn Rimes. But one of the highlights in his career would be his collaboration with Shania Twain on the song “From This Moment On,” one of Shania’s biggest hits.

“I think collaborating with others is one of f the parts that makes it fun. It brings the best in you, another side of you, because you’re doing something with somebody else… recording ‘From This Moment On’ with Shania Twain was one of the greatest highlights of my career. And she’s a massive artist. She’s one of the greatest best-selling artists of all time, and to be able to be the guy that got the phone call, was a big blessing to me,” he said.

“I think he has a great voice. Again, I think I love his delivery, vocally. He has a really unique style,” Bryan said.

As for whether Maine and Alden will be on the show, Bryan said he’s up for that.

“I don’t know yet but they are certainly welcome to be there. The door is wide open. I would love for them to come,” he said. – Rappler.com