John Nite on what he’ll miss most about Kuya Germs 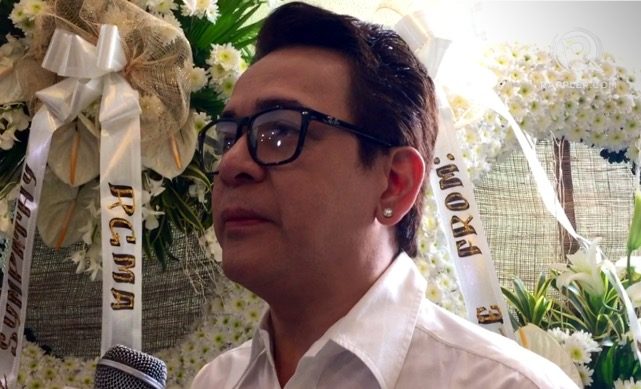 MANILA, Philippines – Many stars have shared what they will miss the most about the late entertainment icon, German “Kuya Germs” Moreno, regarded as a second father by many.

But for John Nite, Kuya Germs’ nephew, the thing he’ll miss the most about the Master Showman is simply his presence.

During Kuya Germs’ wake on Saturday, January 9, John said that Kuya Germs’ death hasn’t sunk in yet. He added that prior to his arrival at the wake that evening, he had his first sleep in two days.

(It’s like I wasn’t in my senses, that I was visiting him here. When I passed there – going down the stairs, that’s his room, it’s like it was still normal, every day I still do that, I go down and I still see him there.)

Before his death, Kuya Germs lived with John.

John added that it’s mostly Kuya Germs’ presence that he will miss the most.

“Yung tanong… sa akin [kung] ano mami-miss ko sa kanya, ‘yun, as in wala lang siya (That question…for me, what I would miss about him, it’s that, that he’s gone). But he will always forever live in my heart, in my family’s heart, lahat ng mga taong nagmamahal sa kanya (everyone who loves him).”

(For me, personally, because personally we’re together, we eat together, there are problems, things other people don’t see, on a personal level, and family things too, that only we know. That’s what I’ll really miss about him, that he’s not there physically, and there are decisions that only he can make for me. It’s hard.)

Later in the interview, John also said of Kuya Germs’ death, “Ngayong mawawala siya (Now that he’s gone), it will end an era, or it will end another chapter in show business.”

John also co-hosted Walang Tulugan with the Master Showman with Kuya Germs before his death.

Kuya Germs died on January 8 of cardiac arrest. He is known for hosting GMA Supershow and That’s Entertainment, and has appeared in many TV shows and films.

His interment will be held on Thursday, January 13, at the Loyola Memorial in Marikina. Before the interment, he will stay for a night at the GMA studio, as Kuya Germs remained loyal to the network. – Rappler.com