Facebook Twitter Copy URL
Copied
(UPDATED) Did Solenn get married last December? Solenn says that the event in Argentina was a celebration for her engagement to Nico Bolzico, so she is 'technically' single

MANILA, Philippines (UPDATE)– Solenn Heussaff clarified that her “wedding” in Argentina with fiance Nico Bolzico was just a celebration of their engagement.

“We just celebrated in Argentina because hindi ko nakita yung parents ni (I haven’t seen the parents of) Nico in two years,” Solenn said. “So since the engagement, wala pang (there was no) [celebration].”

“I haven’t done any church, wala akong (there was no) wedding dress, wala (none),” she added.

On Saturday, January 16, Solenn sent out a mesage on Instagram, saying: “I’m in the process of fixing many papers after our celebration in Argentina and I am currently busy prepping for my wedding later this year. I always said I would share after the wedding to keep it private and since it hasn’t happened yet – I haven’t shared! Please respect my privacy in this journey. I will only get to live once and I’d like this milestone to be celebrated pirvately first, then shared.”

Highlight of my trip: our union in argentina. Although I am a public figure – I still choose to keep some things private. Many people feel they have the right to judge and speculate whether or not we got married etc. Im in the process of fixing many papers after our celebration in argentina and i am currently busy prepping for my wedding later this year. I always said I would share after the wedding to keep it private and since it hasn't happened yet – I haven't shared! Please respect my privacy in this journey. I will only get to live once and id like this milestone to be celebrated pirvately first, then shared. I promise when it happens you will know! ill be sharing all the photos and videos of my union, celebration and upcoming wedding once its all done. That's all for now folks! Lol

Solenn also said that she wants to get married in France in the future, and that the wedding will happen sometime this year. Asked for a comment on Isabelle Daza’s post on Snapchat, Solenn said: “Loka-loka yan si Isabelle kasi (Isabelle is crazy).”

On the day that Solenn supposedly got married, Isabelle posted videos and photos on Snapchat. One was captioned “Mr and Mrs Bolzico,” while another said, “Rustic-style wedding.”

(He was just laughing about it. His mother also laughed about it because her picture was even in a newspaper…it was so funny.)

Solenn explained that her friends, Isabelle, Georgina Wilson, and Anne Curtis were with her during her annual visit to Argentina just because they wanted to join in on the trip this year.

As for her white “wedding” dress, Solenn said she wore the dress since white had become her favorite color after playing the role of Cappuccina in Marimar. (IN PHOTOS: Solenn Heussaff’s stunning wedding gown)

Designer Boom Sason posted two photos of the dress on Instagram, describing it as a “custom @boomsasonweddingclassics gown for [Solenn Heussaff’s] lakeside civil wedding ceremony and reception in Argentina.”

“Pag nangyari na yung big day na iyan, may (When that big day happens there’s a) hashtag and we will share everything,” Solenn said.

Solenn and Nico got engaged in December 2014. 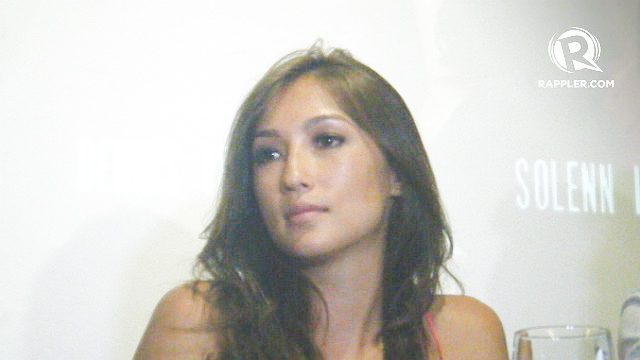 Meanwhile, Solenn is starting her 2016 with the movie Lakbay2Love, in which she stars with Dennis Trillo. In the movie, Solenn plays Lianne, who is recovering from heartbreak and is making a video about climate change. She meets Jay-R, a forester played by Dennis, along the way.

Solenn said that aside from having a fun time making the movie, it also gave her the chance to see part of the Philippines through biking and hiking. She singled out Mt Maranat where in they hiked for 13 hours for one scene.

She also considers her visit to Benguet as one of her favorite moments.

(My favorite is Benguet because the place is so beautiful and it had fog, it was really beautiful.)

Solenn also contributed a song to the movie entitled “Kilig.” Other songs featured in the movie are “Overdrive,” by the Eraserheads – in which they were allowed to change the word drive to bike – and “Liwanag” by Kai Honasan.

Also starring Kit Thompson and directed by Ellen Marfil, Lakbay2Love will be shown in theaters on February 3. – Rappler.com