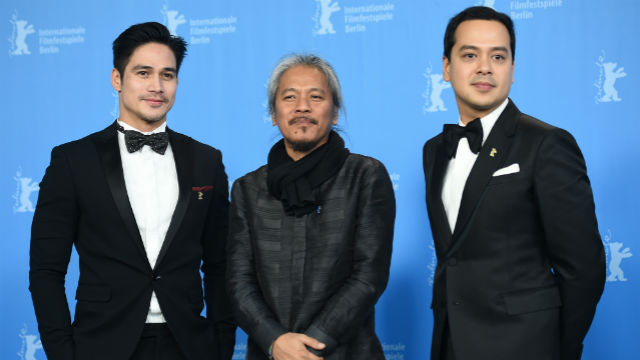 Daring Filipino director Lav Diaz had told Agence France-Presse before traveling to the German capital that his historical epic A Lullaby to the Sorrowful Mystery (Hele sa Hiwagang Hapis in Filipino) would be a “struggle” for the audience. (READ: Main lineup, Berlin film festival 2016)

But as the curtain closed at the 1,600-seat Berlinale Palace theater, more than half the audience was still present and rewarded the 57-year-old filmmaker with warm applause and cries of “bravo.”

The ambitious film is one of 18 films vying for the festival’s Golden Bear top prize, to be awarded by jury president Meryl Streep Saturday.

Streep and her 7-member panel including British actor Clive Owen attended the sole screening of the film, which was sold out and packed to the rafters Thursday morning.

Security staff confiscated water bottles and required audience members to check their bags before they immersed themselves in the rich revolutionary history and mythology of Diaz’s impoverished homeland.

Some audience members were toting inflatable pillows and smuggled in granola bars as they entered the cinema, shaking hands in solidarity with their seat mates before the screening began.

Gerhard Reda, a German amateur filmmaker who says he watches 10 to 15 movies each week, called the screening a “personal test of courage.”

He said he had started to watch another of Diaz’s notoriously lengthy films last year but had to give up after an hour.

“He can have a 45-minute scene that just has people talking or walking through a field,” he warned.

“Some love him, some hate him but he’s always a challenge.”

About an hour in, the 44-year-old quietly rolled a cigarette while still in his seat so he wouldn’t miss too much when he popped out for a smoke.

As the lights came up Thursday night, Taiwanese film critic Yun-hua Chen said that she was “doing absolutely fine.”

“It was an amazing experience – totally worth it,” she said.

“The film really needed to be this long so the audience can submerge in the story.”

Enrico Cehovin, a 27-year-old Italian, said that playing long video games had prepared him for the experience, which he admitted was “only for cinema lovers.”

“Some games take 8 to 10 hours to play and you don’t even understand where the time has gone – they can be like long movies,” he said.

“But this was an experience unlike any I’ll have again.”

Development worker Carla Schraml, 36, admitted she did not know much about the Philippines’ revolution going into the film.

“Despite its length, I wish I had learned more,” she said, criticizing a meandering story that was only partly accessible for an uninitiated audience.

“Diaz has his own signature poetic style and the images are just sublime,” he enthused.

“He needs a canvas this size to tell the story he wants to tell in all its complexity – in its historical sweep there is not a single shot that is excessive.

“Diaz shows what cinema is capable of.” – Deborah Cole, AFP/Rappler.com