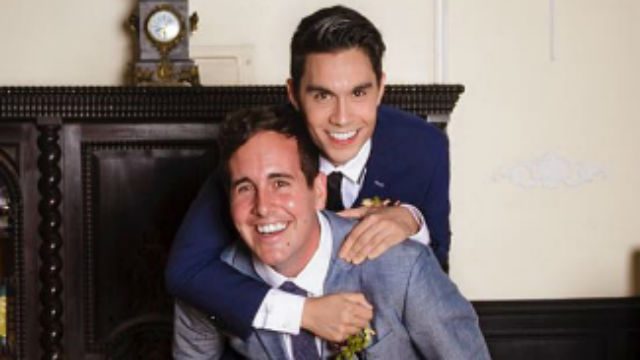 Facebook Twitter Copy URL
Copied
(UPDATED) The music couple posts photos of their wedding, a few days after Sam comes out as gay to his fans and announces their engagement

MANILA, Philippines (UPDATED) – Musicians Sam Tsui and Casey Breves, who rose to fame by posting covers and original songs on YouTube, are married. The lovely couple got hitched just a day after Sam posted a YouTube vlog where he came out as gay. (WATCH: Sam Tsui, Kurt Hugo Schneider perform ‘Don’t Want an Ending’)

The two posted photos of their April 16 wedding on social media, as did their wedding photographer, Sean Marier. (READ: Sam Tsui, Kurt Hugo Schneider: From schoolmates to superstars)

Photos of the wedding were taken at Carondelet House in Los Angeles.

Sam shared this photo of him and Casey, saying, “So thrilled to tie the knot with this guy – and truly moved by the excitement and love I’ve felt from the Samily!!! So much! More pics to come… Now back to making music.”

So thrilled to tie the knot with this guy – and truly moved by the excitement and love I've felt from the Samily!!! So much! More pics to come…now back to making music

Casey, on the other hand, posted a photo right before they tied the knot. He wrote, “I’m getting married today! Really excited/nervous for the ceremony and so grateful for all the love and support from our family and friends and people around the world!”

I'm getting married today! Really excited/nervous for the ceremony and so grateful for all the love and support from our family and friends and people around the world! Will share wedding pictures soon!

So wonderful to see so many Tsui's this weekend, all the way from Hong Kong!!!

In a video posted on April 15, Sam came out as gay, and also later revealed that he was getting married.

“I am in a relationship, and have been, for quite some time with someone that I’ve only recently started doing a bunch of YouTube videos with. He’s an amazing singer, a lot of you probably already know who he is, the talented and handsome, Casey Breves,” said Sam.

Casey and Sam have collaborated on a couple of covers together recently.

Over the years, Sam has been quiet about his relationships, keeping most of his posts on his YouTube channel and his social media accounts about his music. Sam has also never spoken about his sexuality in the past.

Earlier in the video, Sam recalled his early days on YouTube. “At the time, I wasn’t really a vlogger, I didn’t have much social media, I really didn’t have any idea that the music I was putting on YouTube had any relation to my day-to-day personal life,” he said.

Sam explained that it’s different nowadays, adding that he now connects with his fans through his social media channels.

“But there are some things, like my relationship stuff, that because I never really talked about it in the early days of doing this,” Sam continued. “I just never felt I had the opportunity or need to go on and on about it here.”

After saying that he’s dating Casey, Sam clarified, “Given that this is a coming out video of a sort, I wanna say and say very clearly, that waiting to tell you guys about this does not mean that I am or was ashamed of anything.”

He added, “I am incredibly proud of who I am and very proud of my relationship with Casey, because he is amazing.”

“And you know, I also never really felt the need to do a big, teary coming out video, because honestly, in my daily life, it’s such a non-issue. It’s such a small facet of who I am.”

Towards the end of the video, Sam also revealed that he and Casey are getting married: “Not only are Casey and I are not only dating, but very, very soon, we are getting married. Which I am incredibly excited about, very nervous about as well.”

Sam said that he would release another video soon, this time with Casey, explaining more about the events that have led up to their wedding.

After remembering his experiences of growing up with Sam, Kurt said, “I’m fortunate to have you in my life. I’m sure there is so much more to come and I’d just like to offer my best wishes for your next adventure. So excited and happy for you and Casey Breves. Huge congrats on the wedding, sending you both lots of love.”

15 years.. That's how long I've known @thesamtsui.. We were in middle school choir together as 12 year olds.. We rode on the same bus to school together always sitting at the front.. We were in high school musicals together.. We gave each other rides home after late rehearsals.. We went to college together.. We posted our first video together.. We figured out this whole Youtube thing together.. We moved to LA.. We've been halfway around the world.. I'm fortunate to have you in my life. I'm sure there is so much more to come and I'd just like to offer my best wishes for your next adventure.. So excited and happy for you and @caseybreves Huge congrats on the wedding, sending you both lots of love 🙂 go to YouTube.com/TheSamTsui to hear from the man himself

Kurt and Sam have collaborated on original music and covers together, and have toured and held concerts together as well. – Rappler.com