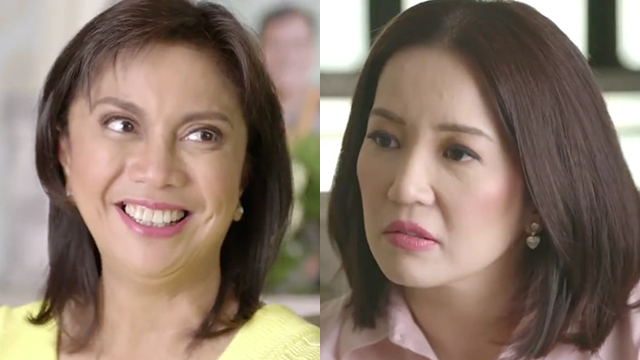 The 7-minute interview, one of Kris’ last ones before she took a break from showbiz, was filmed at Leni’s condominium in Quezon City.

The interview covered topics such as Leni’s choice to maintain a humble household, her “political awakening” due to the death of Kris’ father, Ninoy Aquino, her work, and being the LP’s second choice for vice presidential bet.

Here’s what Leni and Kris talked about in the video:

On being second choice

“Of course I have to bring up the fact na you knew you were second choice,” said Kris towards the end of the interview. Before the LP offered the post to Leni, they offered it to current presidential candidate Grace Poe.

(‘Don’t you realize that now, you’re being given a chance, for the voices that we’ve been fighting for, that no one has been listening to.’ We will draft amendments to the laws that are not fair to them, and peddle them to congressmen and legislators, but no one pays attention to us.)

(And now, if I become VP, the position of VP is high enough to really make a difference.)

The interview began with Kris mentioning that they were in Leni’s home and Leni, laughing, apologizing for its small size. Most politicians, she mentioned, usually have large houses.

Leni, whose late husband Jesse Robredo was former Naga City mayor and interior secretary, told Kris that when Jesse decided to enter politics, she insisted on a normal life for her children.

(I’ve seen that the children of some politicians, for us, are abusive, I’m afraid that we might be like that too. Jesse told me, ‘That’s all up to us.'”)

Jesse and Leni decided to shield their children from politics early on. Jesse would steer his political guests away from their home and to his office instead, and so people weren’t used to visiting and spending time at the Robredo home.

“So kami parang we were left kami-kami lang, normal na normal (We were left on our own, completely normal),” said Leni.

On Ninoy Aquino and her ‘political awakening’

Leni shared that she lined up to see Ninoy’s coffin and eventually got to see it at 3 am, due to the long line.

After that experience, she became active in rallies and as well as during the EDSA revolution.

(There was a strong fire within me to work for the govenment. I was so sure of the kind of lawyer I wanted [to be]. I really wanted to go into public service lawyering. All I knew then about public service law was public attorney’s office, so that’s where I applied.)

At the end of the interview, Kris reiterated her support for Leni. In the behind-the-scenes photos she posted previously, Kris said that she volunteered to do the interview: “I believe in her sincerity. I admire her humility. I respect her desire to give true public service with no personal ambition. I trust her with my sons’ future.” – Rappler.com