Facebook Twitter Copy URL
Copied
'I am better. I have survived,' the director of the upcoming movie 'Just The 3 of Us' says

MANILA, Philippines – Months after she was hurled into a controversy by two former Forevermore talents who accused her of verbal abuse, director Cathy Garcia-Molina said she is doing better.

“I am better. I have survived. I have gone through na sobrang dilim na panahon (I have gone through a very dark moment),” she said during the press conference for her movie, Just the 3 of Us, on Sunday, May 1, at Ayala Fairview Terraces.

“Nag-dip talaga ako (I was really at my lowest point), as in I got crushed – emotionally, romantically – and you know, hindi lang spiritually, pero iyon, bagsak na bagsak ako (maybe not spiritually, but I was really down).”

“But I was able to recover and I am better now. And I hope I will be a lot better after this movie [is shown],” the director said.

Last December 31, an open letter by Rossellyn Domingo and her boyfriend Alvin Campomanes went viral. In it, they accused the director of cursing and disrespecting talents after she had allegedly humiliated Alvin during a taping of the show.

The director already addressed the issue, admitting that she did curse at them. However, she urged everyone to place the issue in its proper context. She has also since apologized for her actions. (READ: Director Cathy Garcia-Molina responds to ‘Forevermore’ talent’s complaint)

Cathy also said that making the movie was a therapeutic avenue for her after working on the pilot of Dolce Amore: “This is the movie that healed me.”

(This is the movie – because Lloydie and I – the journeys of the characters in the movie were also what we had been through. Here, it’s like getting to know each other, falling in love again, and that’s just like me.)

Working with John Lloyd and Jennylyn

Having previously worked with John Lloyd in several other movies, Cathy said that she could now give more leeway to the actor. “Si John Lloyd Cruz is different now. I’ve allowed him, I’ve let him go,” she said.

“Normally tutok na tukok ko iyan – guided all the way. Ito parang as he matures, he needs less and less direction from me. He has matured in many ways and kaya na niya ang sarili niya and he’s different in this film.”

(Normally, I would be focused on him – guided all the way. Here, it’s like, as he matures, he needs less and less direction from me. He has matured in many ways and he can handle himself now, and he’s different in this film.)

The director also added that she would love to work with Jennylyn again in a future project. (READ: John Lloyd, James, and Nadine on competition between their movies) 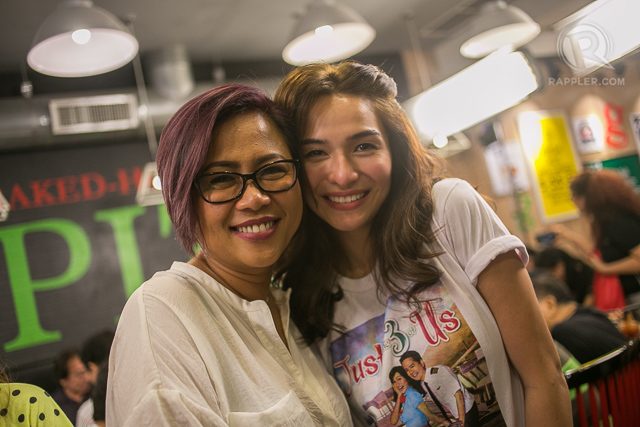 (It’s not enough because it’s only now that I got to work with Jen, so even before we can become comfortable with each another, we’ve already finished the movie. She’s nice and great to work with.)

In Just the 3 of Us, John Lloyd plays Uno, a pilot, while Jennylyn plays CJ, a flight attendant who is excessively infatuated with the former. They spend one night together, and circumstances force them to live under one roof and bear with each other – after CJ drops a bombshell revelation: she’s carrying his baby.

The film opens in cinemas on May 4. – Rappler.com