IN PHOTOS: Stars step out for ‘Artists for Mar Roxas’ event MANILA, Philippines (UPDATED)  – Just days to go before the national elections, stars supporting presidential candidate Mar Roxas gathered on Tuesday, May 3 at Mesa restaurant in Quezon City to explain why they are voting for him in the polls.

Early this afternoon: @GaryValenciano1 performing during the Artist for Mar gathering. pic.twitter.com/KlFi3PrwGx 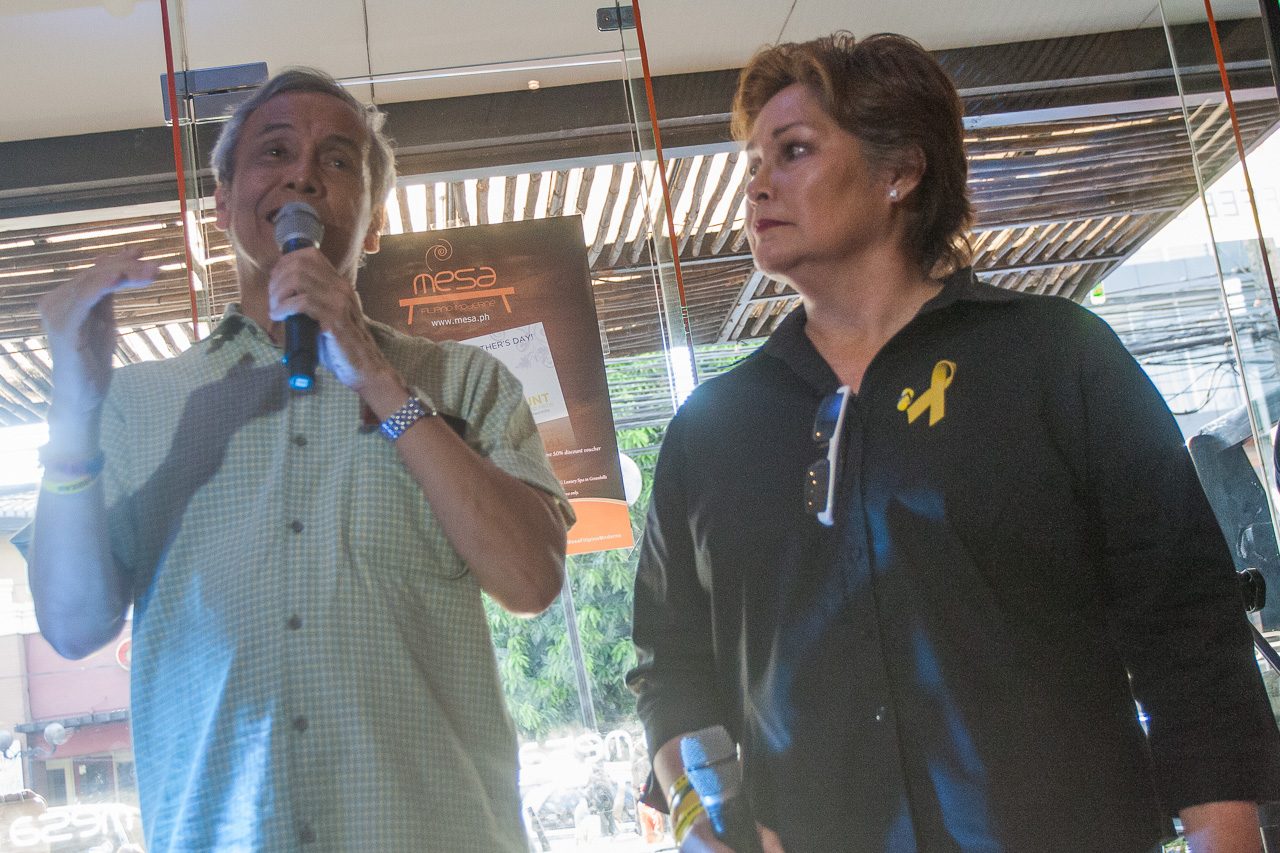 In an interview with reporters, Karylle explained why she is rooting for the Liberal Party’s standard bearer and running mate Camarines Sur congresswoman Leni Robredo. “Usually tahimik ako pagdating sa pulitika pero (very quiet when it comes to politics but) there are times that you have to stand up and be counted and ngayon iyon (that moment is now). I feel very strongly about presidentiable Mar Roxas. Gusto ko siya at alam mo mahabang proceso ang pinagdaanan kaya siya ang napili ng puso ko (I like him and I went through a long process before I chose him to vote with all my heart),” she said.

Daniel meanwhile reminded people especially those on social media to think really hard before saying anything that would hurt anyone, following reports of cyberbullying. (Make sure that we know what we are talking about. Let’s not be too arrogant. Make sure you have something to back up what you’re saying.)

(Don’t just talk and talk if you don’t know what’s happening in the election. There are so many know-it-all people out there when it comes to the election but are not voters. So just shut up if you are not a voter.)

Daniel and Kath on voting for Mar. pic.twitter.com/Q7uUdV4B80

He also reminded everyone to really think long and hard about who they will be voting for.

(To the voters, I just want to say be open-minded with what’s happening in the elections because its fast approaching. It’s just in a few days, so that’s next week already. Know who you are supporting very well, whoever they are, because it is not to late to change your decision, but know what’s happening around.)

Gary Valenciano meanwhile said he’s supporting Mar because he believes that his administration could be one of those who can continue the change.

“I think in the past elections, the media has never really seen me talk in this way. There is a reason why after all the debates that have gone on amongst friends, online, from different people from different walks of life,  that my choice would be Mar and Leni. It wasn’t just through the debates, but for me kasi, (because) when it comes to planning for a country that has undergone so much turmoil in so many years, sometimes it takes one, two, three, four, maybe five administrations before an entire nation can feel complete change. This I believe if Mar wins, would be one of the administrations that will continue that change for the better,” he said.

Gary said that he respects the decisions of others but will not criticize them for it.

“I am not speaking with any… as I stand here, I will forever respect the decisions of others. I maybe bashed and I’m ready for it but regardless of what is said, I am also a Filipino, and I was not born and raised to bash others.”

Gary also announced that his eldest son Paolo is going to be a father soon and Gary wants a secure future for his grandchild.

“My son Paolo is going to be a father in November. I am thinking of that child and I want that child to at least experience the changes that we often been seeking and been longing for.”

Dingdong Avanzado, vice governor of Siquijor and singer with wife Jessa and daughter Jayda, shared that he decided to not run for the elections to campaign for Mar because of the long battle ahead of him.

“I suspended my campaign and in fact, I told Sec Mar and the reason was ang daming nagtaka na hindi ako nag run for reelection. But I said, you know, mas mabigat yung laban ni  (it’s a difficult battle for)Sec Mar and naniniwala ako na  (I believe) I can help him more, ‘pag tumulong ako sa kanya imbes na naka focus ako sa province naming sa Siquijor (if i help him instead of focusing on my province of Siquijor).

“That’s why I told him before the last day of filing ‘Sec, I’m suspending my campaign and I will campaign for you because I believe in your leadership and you’re the most qualified to lead our country today in the next 6 years,” he said.

Here are other photos from the event. Others who have also expressed their support for Mar Roxas but were not present at the event include John Prats, Melai Cantiveros, James Yap, Maricel Soriano, John Lapus, Ramon Bautista, Angelu de Leon, and Carla Abellana.

In December, many of the artists appeared in the music video “Fast Forward,” performed by Billy Crawford, Jay-R and Kris Lawrence. – Rappler.com