May 19, 2016 5:18 PM PHT
Rappler.com
Facebook Twitter Copy URL
Copied
Khalil Verzosa says that he and Baron have resolved their issue over the phone. He also says, 'I think Baron Geisler deserves enough. Out of respect to him, I took down the video' 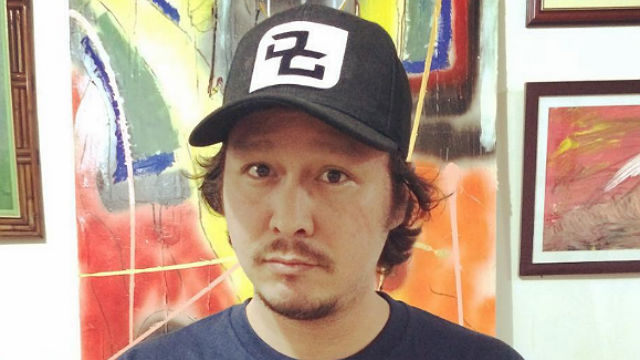 MANILA, Philippines – All is well between actor Baron Geisler and student Khalil Verzosa, after a video showing Baron cursing at a student and violently grabbing him went viral this week. (READ: Baron Geisler: Viral video with student ‘taken out of context’)

On Facebook, Wednesday, May 18, Khalil said that he and Baron have talked to each other over the matter.

Khalil firstly explained that the video they were shooting was focused on Republic Act No. 9262, a law to counter violence against women and children.

“I hired Baron knowing full well his court cases on women. Why? For him to apologize and speak to the minds of people who look up to him e.g. badass, tough guy, masa,” he said.

“Basically to put into context, male celebrity advocates. Since this incident I’ve asked other male advocates for the cause of safety for women in public places. Will be shooting today again.“

Khalil added that Baron and him spoke over the phone to resolve the matter. “When I uploaded the video I thought that was my form of justice, perhaps different from other people,” he said.

“Though, what I really want to point out is that even if this petty fight between guys became this viral, why do we not focus on the reality that women get harassed in the streets.”

“Baron believes in this, we talked about it, violence comes in all forms, specially most of the time, street harassment, it’s a constant toil for women to experience them every week. Think about your sisters, mothers, wives and daughters, would you want them to experience this everyday?”

Khalil ended his note, saying: “I think Baron Geisler deserves enough. Out of respect to him, I took down the video. Imagine if you were the one harassed and a found footage of you harassing women or whoever, would you change for the better?”

“We all need [to] realize that violence isn’t the answer, violence in all forms. I also want to ask everyone to stop sharing the video. We just want to put this issue behind us. Peace!“

Baron replied on the message Khalil posted, saying in Filipino: “Thank you, man. This made me think. Hug!”

(Dude, I hope our anti-rape advocacy video would push through. I want to join your advocacy.) 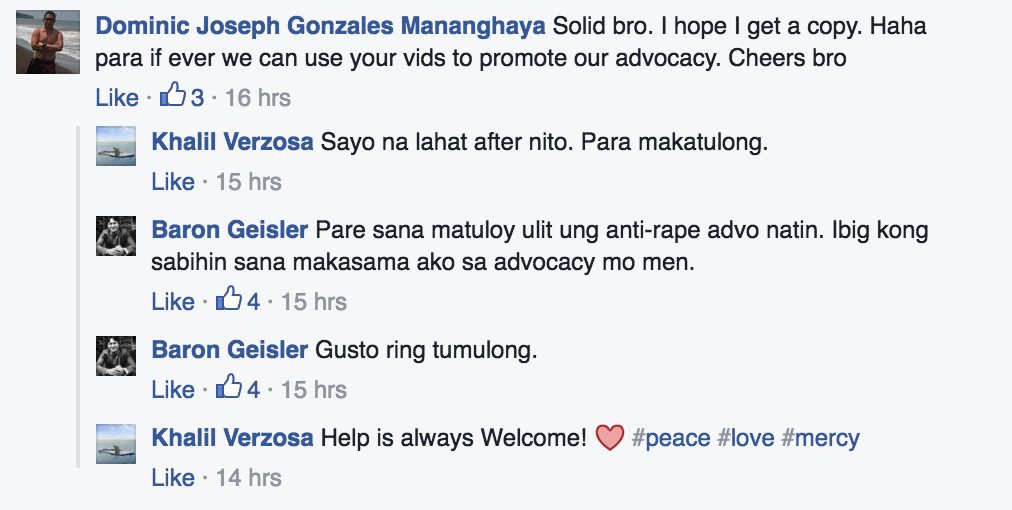 Baron also posted a message for those who continued to criticize him and alleged that he was under the influence of drugs.

“Sa lahat ng nag sasabing nag dro-droga ako. GAME! Any day, any time! I dare you!! I challenge you! Drug test!” he said. “Pero bayaran nyo ko pag negative!! Baka kayo ang adik! I urge you to look at yourself in the mirror and ask who you really are!”

(To those saying that I’m taking drugs: game! Any day, any time! I dare you! I challenge you! Drug test! But if it turns out negative, you have to pay me. Maybe you are the ones taking drugs!)

In a previous statement through his management ALV Talent Circuit, Baron said that the video was “taken out of context.” He also posted a statement on his Facebook page to address the matter.

Baron has been involved in other controversies in the past. In 2013, he was found guilty of an act of lasciviousness, following a case filed against him by Patrizha Martinez, the daughter of celebrities William Martinez and Yayo Aguila.