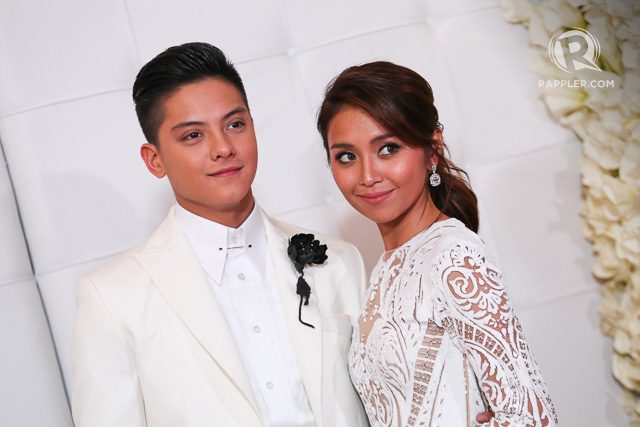 MANILA, Philippines – The annual Star Magic Ball is days away and aside from the fashion and the actual event, it is also a chance for love teams and real-life couples to appear (sometimes debuting on the red carpet) and socialize with their peers.

Some of these couples have attended the ball together over the last few years, while some tandems are about to make their debut. Here are the couples we are looking forward to seeing at this year’s night of glamour.

The Kathniel tandem has been a staple to look out for in the past balls. Last year, Kathryn wore a gown by Michael Cinco. We’ll definitely be on the lookout for what she and Daniel will be wearing on the red carpet. Another pair everyone is looking forward to seeing in the tandem of Enrique Gil and Liza Soberano. Last year, Liza wowed the crowd with her princess-inspired gown by Michael Cinco, and like Kathryn, fashion fans will be on the lookout for Liza’s gown this year. Daniel and Erich made their debut on the red carpet last year after confirming that they were a couple June 2015. In 2014, Daniel was spotted with his sister Vanessa as his date.

The two are currently seen on the morning show Be My Lady. Real- and reel-life couple Tommy Esguerra and Miho Nishida will attend the Star Magic Ball for the first time after their relationship bloomed on Pinoy Big Brother. The two said that aside from being excited, they are looking forward meeting their other Star Magic peers and just have a fun night together. Kim Chiu and Xian Lim have been going to the ball together for the past years. Last year, the two won the Couple of the Night award. Will they win the award again this year?

6. Bailey May and Ylona Garcia Bailey May and Ylona Garcia or Bailona have been making waves with young audiences since they stepped out of Pinoy Big Brother. The two attended the ball last year, and their fans can’t wait to see them again on the red carpet. The new tandem of Hashtags member Mccoy de Leon and Elisse Joson will also attend this year’s event. Before even becoming McLisee, the two have already attended the ball together in 2013.

In an interview with ABS-CBN, Elisse said that she and Mccoy were just being real when they got to know each other inside Kuya’s house. Elisse said she will wear gown by designer Francis Libiran. One of the most classic pairs to watch out for has been husband and wife duo Richard Poon and Maricar Reyes. Maricar is a favorite on best dressed lists because of her simple and elegant style. They have remained mum about the real status of their relationship, but rising actress Sofia Andres confirmed that Diego Loyzaga, son of actress Teresa Loyzaga and Cesar Montano will be her date for the ball.

(I feel blessed and happy because we will be together with the big stars. There is an opportunity to mingle and bond.) Another couple everyone will be watching out for is Billy Crawford and Coleen Garcia. The two have been walking the red carpet since 2014 and although there was a hiccup at the 2014 ball when Billy got in trouble with the police, things have been going well for the two since then. Sue said it was only through an endorsement shoot that they formally met. Since then, the two have become good friends. Ronnie event posted on Instagram that he will be escorting Sue to the ball. Jericho Rosales and wife Kim Jones are also often on people’s best dressed lists, and it’s undoubtedly fun to watch these two on the red carpet as they are always brimming with joy and positive energy.

Who are your favorite celebrity couples and love teams? Let us know in the comments section. – Rappler.com