IN PHOTOS: PH stars step out for Halloween 2016 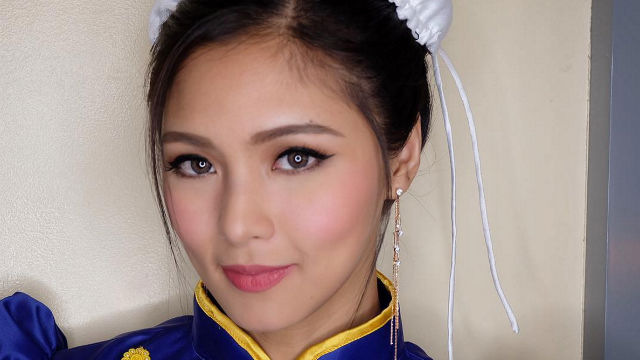 MANILA, Philippines (UPDATED) – It’s that time of the year again! Everyone’s celebrating Halloween a few days early this year, and all our favorite stars ventured out dressed as creepy creatures or cool pop culture references.

Vicki Belo and Hayden Kho’s daughter Scarlet Snow Belo is known for her cute costumes, and her Halloween costume did not disappoint. Her half-sister Cristalle Belo posted a video of her attending a Belo Medica Group Halloween party as Nemo!

Early Halloween celebration at @belobeauty with our fishie @scarletsnowbelo #TeamSnowyBear

Dingdong Dantes and Marian Rivera’s daughter Maria Letizia dressed up as Belle from Beauty and the Beast.

In a world of mortals, always remember you are a Wonder Woman!  Happy Halloween!!

Here are close up photos of Isabelle as Captain Planet.

With your powers combined… !

Here’s another photo of Isabelle and Adrien this time as Hillary Clinton and Donald Trump.

Georgina Wilson and husband Arthur Burnand were dressed as Gomez and Morticia Addams.

Happy Halloween from the Adams family

Anne Curtis posted a photo of her and boyfriend, entrepreneur and writer Erwan Heussaff, as characters from Stranger Things.

Check out James Reid and Nadine Lustre as characters from Final Fantasy.

Here’s another photo of Arci this time wearing Sailor Moon.

Coleen Garcia and Billy Crawford were Edward Scissorhands and Beetlejuice.

Cristalle Belo Henares and husband Justin Pitt dressed up as a member of the Ghostbusters and Jason.

"My bounty is as boundless as the sea, My love as deep; the more I give to thee, The more I have, for both are infinite."  #RomeoandJuliet #Halloween2016

Patrick Garcia and wife Nikka accompanied their kids dressed up as the King and Queen of Hearts.

Now there's Alice, the King and Queen of s… and of course the mini Queen!!! #bumblebeeandcompany #costumesbybumblebeeph

Jhong Hilario meanwhile dressed up as comedian Pikotaro who popularized the song “Pen-Pineapple-Pen.”

I hava a pen…i have an apple… uhhh! Apple pen! #showtimeholloweenspecial

Andrea Brillantes posted a photo of herself early on October 9 in a bright red-violet wig, accompanying her post with devil and pumpkin emojis.

Raymond Gutierrez and Tim Yap were spotted as skeletons.

Who's the skinniest of us all? In my @filaph sneaks while Halloween hopping. #filaph #theworldismyplayground

Martine Cajucom and Cliff Ho also got dressed up for Halloween.

a casual sleepy sailor and me on a normal day

The cast of Eat Bulaga got wore their Halloween best for the show on October 29!

With kuya @aldenrichards02 and kuya @unoemilio

Paolo Ballesteros is known for his makeup transformations, but he changed things up a bit on October 29 and dressed up as a salmon sushi.

Ruffa Gutierrez hosted Marriott hotel’s Halloween party as a fairy queen. She also posted a throwback Halloween outfit from 2011, when she dressed up as Poison Ivy!

The EVIL QUEEN & The FAIRY QUEEN. Halloween Pre-Game at the @manilamarriott with @holamitchy_

Trick or treat!!ALLOWEEN 2011 as POISON IVY. custom made by @reginesboutiqueph

Coleen also posted a throwback to Halloween 2015, when she dressed as The Joker!

#throwback to last Halloween, cause it's that time of the year again So excited!!! (prosthetics and #makeupbycoleen)

What are you going to be this Halloween? Show us your photos in the comments! – Rappler.com