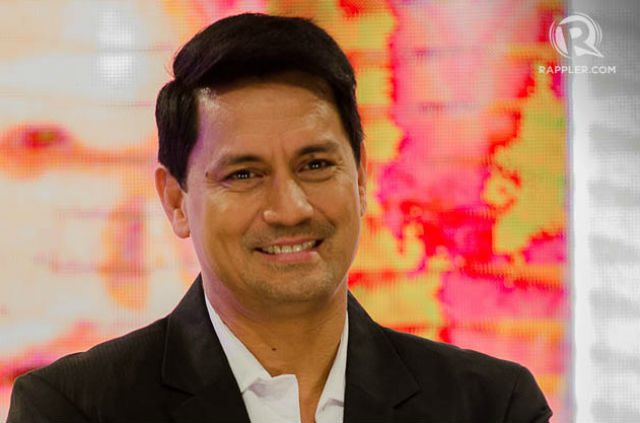 MANILA, Philippines  (UPDATED) – Actor and Ormoc City Mayor Richard Gomez said on Thursday, November 10, he is set to file a case against Chief Inspector Jovie Espenido, the police chief of Albuera town in Leyte who reportedly linked him to a drug syndicate.

He initially dismissed the allegation as “ridiculous and outright laughable,” but later in the day attributed to politics the attempt to connect him to the illegal drugs syndicate of Kerwin Espinosa.

On Thursday, the Senate conducted a hearing on the deaths of Albuera Mayor Rolando Espinosa Sr and fellow Leyte sub-provincial jail inmate Raul Yap, where lawmakers found a number of loopholes in the policemen’s account of a shootout.

During the hearing, Chief Inspector Leo Laraga – who led the operation on behalf of the Philippine National Police-Criminal Investigation and Detection Group Eastern Visayas against Espinosa and Yap – claimed that the mayor himself had named the following as cohorts in the drug operations of his son Kerwin Espinosa:

“I also remembered that I heard it from Police Chief Inspector Jovie Espenido during the case conference doon sa bulwagan (in the conference hall). Sinabi niya rin po ‘yun. Sinabi niya mga pangalan na sinabi ko na binanggit ni Mayor,” Laraga said. (He also said that. He mentioned the names that I said were mentioned by the Mayor.)

Espinosa is the father of alleged drug lord Kerwin Espinosa, who is now in jail in Abu Dhabi. A month before his death, Mayor Espinosa gave the police a “supplemental affidavit” – a list of personalities on his son Kerwin’s payroll. While he admitted knowing about his son’s illegal drugs operations, he denied having benefited from it.

The actor-turned-mayor said he didn’t know the Espinosas. “I dont know them and their political leanings. I have never met them and have never spoken to them,” Gomez said in a text message to Rappler.

In a statement on Facebook on Thursday evening, Gomez said: “I have asked my lawyers to file a case against Major Jovie Espenido, a cop beholden to my political opponents, who has attempted many times to besmirch my name. It is unfortunate that he was assigned to Albuera, Leyte, giving him control over the late Mayor Espinosa, whom I am sure he prevailed upon to impute my character and those of other equally innocent officials.”

In the May 2016 elections, Gomez, who ran under the banner of the Nationalist People’s Coalition, defeated Ondo Codilla of the Liberal Party, a member of an old political clan in the province, and independent candidate Joemar Gallardo.

“I have had to deal with all sorts of controversy and sometimes-bad publicity, but this is the first time that my name has been dragged into an issue involving drugs. I initially did not want to dignify this with an answer but given that this is politically-motivated and very malicious, I am speaking up,” the actor said in his post.

“I have been an anti-drug advocate all my life. I spearheaded a massive anti-drug campaign back in the ’90’s, way before it became a fad, before most everyone wanted to join the bandwagon. I am sorry to disappoint my political opponents, but I have never been and I will never be involved in drugs and no one can pin me down on an accusation so baseless and ridiculous it is almost laughable,” Gomez said.

Gomez said that he ran on an anti-drug platform and even supported President Rodrigo Duterte during the campaign.

“To fight drugs and bring change is the reason I ran, and because the people saw how serious I was about it is the reason I won. Do not drag me into this circus. I was never part of it. I will never be part of it. I urge the legislators to dig deeper into this. Someone is trying to muddle the issue,” he said.