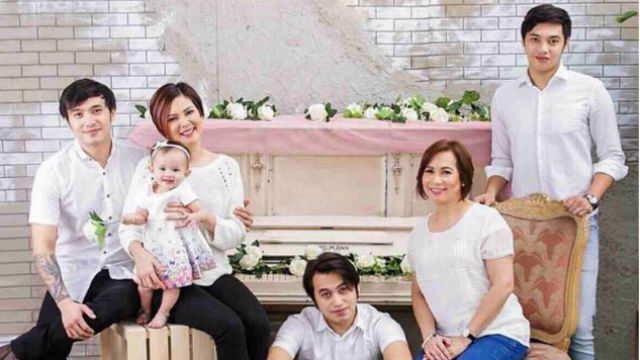 MANILA, Philippines – Callalily singer Kean Cipriano and wife actress Chynna Ortaleza have kept private about their daughter Stellar, but on Christmas Day posted the first photos of her on social media.

The photos, taken by Nice Print Photography, were of Kean, Chynna, and Stellar with Kean’s mom Chona and brothers Keno and Keano.

“Maligayang Pasko mula sa mga Cipriano (Merry Christmas from the Ciprianos)! Thank you Lord for your infinite blessings,” Chynna wrote on her post.

A joyful Christmas from The Cipriano Family! God bless you all! #TheCips #Christmas2016 #WeMissYouDad

In January, Kean and Chynna confirmed that they got married in 2015. In an interview, Kean also said that he and Chynna wanted their married life to be private as much as possible. (READ: Kean Cipriano on married life with Chynna Ortaleza)

In April, Chynna confirmed that she was indeed pregnant. It was in June that news came out that she already gave birth to Stellar, when she posted photos of the baptism party.

(But the thing is, we’re human. There are things that, for me, are okay for others to know about. It’s okay to share those things. But for other things, okay, let’s keep this one to ourselves. Because we’re not in a reality show. We’re no Kardashians and all that.)